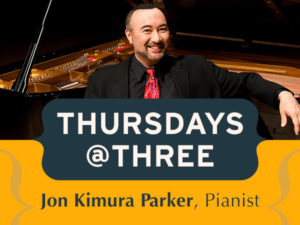 Also on the program, a preview of Trinity Episcopal Cathedral and Portland Baroque Orchestra‘s “Summer Fireworks” concert, including Handel’s Coronation Anthem and works by Purcell. Listen at 89.9 FM in Portland or anywhere in the world via the live player on our website.

This performance will not have a live audience, and is following strict health and safety protocols.

Pianist Jon Kimura Parker is known for his charisma, enthusiasm, and dynamic performances. A veteran of the international concert stage, he has performed regularly in the Berlin Philharmonie, Carnegie Hall, London’s South Bank, the Sydney Opera House, and the Beijing Concert Hall. He is the Creative Partner of the Minnesota Orchestra, having hosted and given seven concerto performances with them in July 2021 with Osmo Vänska, Karina Canellakis, Ken-David Masur. He is Artistic Director of the Honens International Piano Competition and Artistic Advisor for the Orcas Island Chamber Music Festival.

Trinity Episcopal Cathedral and Portland Baroque Orchestra team up once again for a thrilling concert that’s sure to start your summer off with a bang! Hear all four of Handel’s resplendent Coronation Anthems, written for the coronation of England’s King George II; Purcell’s grand choral masterworks Te Deum laudamus & Jubilate Deo; and two of Handel’s most-loved arias for voice & trumpet: “Let the Bright Seraphim” and “Eternal Source of Light Divine.”