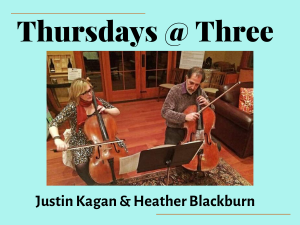 Although we are unable to open our studio doors to either a live audience or live musicians, we hope you will tune in to this week’s episode of Thursdays @ Three with cellists Heather Blackburn and Justin Kagan who recorded a few selections for you from their home! Join us this July 2 at 3pm.

Justin Kagan grew up in the Bronx and has played in orchestras from Brooklyn to Mexico. Prior to moving to Portland in 2005, he spent seven years in the Metropolitan Opera Orchestra, considered among the best in the world. In Portland, he subs for the Oregon Symphony and co-founded the Portland Cello Project. He also performs with such chamber groups as Third Angle, Fear No Music and Beta Collide, and owns Badbeard’s MicroRoastery – a artisan, small-batch coffee roaster.

A New York native, Heather Blackburn is a cellist and teacher based in Portland, OR. She holds degrees from the Peabody Institute and Washington State University where her teachers included Stephen Kates and Christopher von Baeyer. Heather has been appointed to 4 one year contracts with the Oregon Symphony, frequently performs with the Oregon Ballet Theatre Orchestra, and was guest principal cello of the Portland Opera Orchestra during the 2015 and 2016 seasons. She has also performed as guest principal cello for the Tulsa Symphony Orchestra and most recently for the 2019-20 season with Symphony Tacoma. Heather has been a featured soloist with the Portland Symphonic Choir, chamber musician for OBT, performed and recorded for Pink Martini and Portland Cello Project, and has performed with 45th Parallel and Fear No Music.  A passionate educator, Heather has enjoyed working with both kids and adults coaching chamber music and giving orchestra sectionals and masterclasses throughout the Pacific Northwest for the past 20 years, including students in Fear No Music’s Young Composers Project for the past 7 years. Heather is a founding member of the Arnica String Quartet, is the cello instructor and Director of Chamber Ensembles at George Fox University, and maintains a private teaching studio.