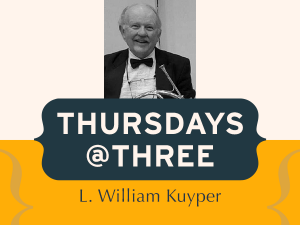 This week on Thursday’s @ Three, Christa Wessel welcomes hornist L. William Kuyper. Prior to his retirement in July 2007, L. William Kuyper was the New York Philharmonic’s Assistant Principal Hornist. He has been active both in the United States and abroad as a soloist, clinician, and recording artist.

L. William Kuyper appeared regularly with the Philharmonic Ensembles in their acclaimed chamber-music series at Merkin Concert Hall. He joined the Philharmonic in 1969 after memberships in both the National Symphony Orchestra in Washington, D.C., and the United States Marine Band. While in the Marine Band, he had the distinction of participating in the State funeral service of President John F. Kennedy.

Mr. Kuyper’s other activities have involved the writing and production of an educational video, Steps to Excellence, for Yamaha Corporation of America. He has also arranged and edited various horn scores for Kendor Music, Inc. and the International Music Company.