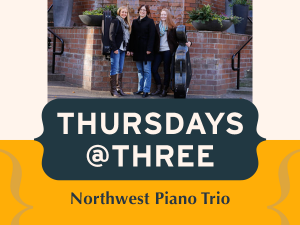 This week on Thursday’s @ Three, Christa Wessel welcomes Northwest Piano Trio. Founded in fall 2014 and based in Portland, OR, the trio is committed to the performance of traditional classical music while also exploring the music of 20th and 21st century composers.

Esther Shim grew up studying violin with Kathryn Gray and piano with Sylvia Killman and playing with the Metropolitan Youth Symphony under Lajos Balogh. She attended DePauw University in Indiana for Violin Performance. Since returning to Portland, she has devoted her time to teaching, adjudicating, and coaching the next generation of musicians.

After eight years as a full-time ICU nurse, Hannah Hillebrand decided to pursue her passion and completed her master’s degree in cello performance with Hamilton Cheifetz at Portland State University in 2014. She thrives on collaboration, and frequently works with composers to present their new chamber works.

​Susan McDaniel has appeared widely as soloist and chamber musician, including recitals in France, Germany, Switzerland, and the Czech Republic. Susan has been the resident pianist on All Classical’s Thursdays@Three live radio broadcast, a member of the music staff at Seattle Opera, Portland Opera, and Utah Festival Opera, among others.