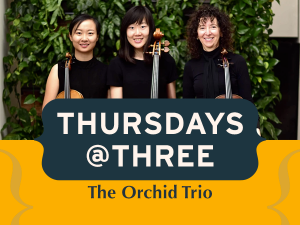 This week on Thursday’s @ Three, tune in for an encore broadcast featuring The Orchid Trio with featuring violinst Siying Ge, violist Deborah Shuster, and cellist Quinn Kun Liu. This Portland-based string trio has a mission to share an appreciation of chamber music performance and collaboration. Join us Thursday at 3pm at 89.9 FM in Portland or worldwide at allclassical.org.

The Orchid Trio has been performing in various venues in Portland and presents exciting performances of both classic and contemporary repertoire in concert settings. In addition to concert performances, the Orchid Trio performs for many events/venues including weddings, parties, art galleries, and wineries.

Siying Ge got her Master degree from Manhattan School of Music. As an orchestra musician, Siying served as a Principal violinist with New York International Orchestra and performed at Carnegie Hall in 2015. She also recorded a full range of music for Final Fantasy 15.

Deborah Shuster studied at the Peabody Conservatory as an undergraduate and received her M.Mus. degree from The University of Colorado. She was a founding member of the Vento e Cordi Quartet in New York, and has played with the New York Pro Arte Chamber Orchestra, the New Jersey Symphony, and the Spokane Symphony among others.

Born in Xinjiang, China, Quinn Kun Liu began her cello studies at age of eight and won her first cello competition at ten. As an orchestra musician, Quinn has served as cellist in a variety of orchestras such as the San Diego Symphony Orchestra, Portland Columbia Symphony, Vancouver Symphony Orchestra, Portland Cello Project, Inland Valley Symphony.