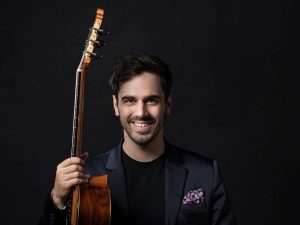 U.S. Classic Guitar’s exciting season will kick off in late January with LA based guitarist Mak Grgic who has just been nominated for a 2022 Grammy-award for best solo instrumental classical album for his new recording Mak Bach. He has quickly established himself as one of the top up-and-coming concert artists of the world and programs music as far reaching as works from the avant-garde, film music, the great classics of guitar repertoire, and much more. Touted as a “gifted young guitarist” by the New York Times, and “a guitarist to keep an eye on” by the Washington Post, Mak Grgic is a star on the worldwide stage. This special performance will feature an all Bach program where he will perform his new Grammy nominated album on a unique well tempered guitar. Learn more at usclassicguitar.org