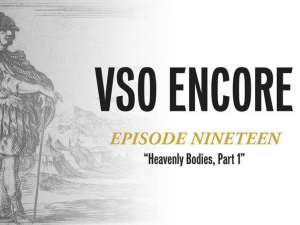 Over the next seven weeks, VSO Encore will explore Gustav Holst’s The Planets. Written between 1914-1916, each of the piece’s movements are named after a planet and inspired by its astrological character. In his notes for the 1920 premiere, Holst wrote: “These pieces were suggested by the astrological significance of the planets; there is no programme music, neither have they any connection with the deities of classical mythology bearing the same names. If any guide to the music is required the subtitle to each piece will be found sufficient, especially if it be used in the broad sense. For instance, Jupiter brings jollity in the ordinary sense, and also the more ceremonial type of rejoicing associated with religions or national festivities. Saturn brings not only physical decay, but also a vision of fulfillment. Mercury is the symbol of mind.”

In the first movement listeners hear the pounding rhythm that is Mars, the Bringer of War. To many this may sound familiar as John Williams used these melodies and instrumentation as inspiration for the Star Wars films.

Tune in by clicking here!