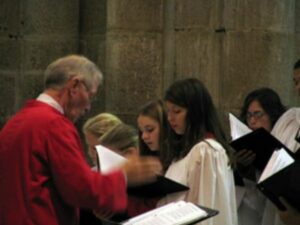 After a pause of two years, the William Byrd Festival returns in 2022 with a celebration of the music of Thomas Tallis and William Byrd. The events of this year’s festival will focus on the work of Tallis, Byrd’s teacher and mentor, alongside music by Byrd himself, and will include services, concerts and lectures.

Mark Williams, Informator Choristarum & Organist at Magdalen College, Oxford, UK, returns to share the direction of Cantores in Ecclesia with the Choir’s resident director, Blake Applegate. Lectures will be given by Dr William Mahrt of Stanford University, Dr Ross Duffin of Case Western University, and Portland’s own Dr Kerry McCarthy, whose book ‘Tallis’ was published by Oxford University Press recently.

The Festival will open with a concert of choral music including Tallis’s famous Lamentations in the Church of St Philip Neri, on August 5, and will culminate in a concert, also at St Philip Neri, on August 21 featuring works by both Tallis and Byrd, including Tallis’s magnificent Mass ‘Puer natus est nobis’ and Byrd’s moving ‘Ne irascaris, Domine’. Masses and lectures will be held at Holy Rosary Church, and there will be an organ recital and Evensong at Trinity Episcopal Cathedral on August 14th. Learn more at byrdfestival.org