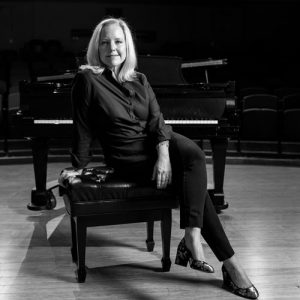 In 2007 the Los Angeles classical station where I was a host decided to change formats to something more lucrative: country music! I took the opportunity to move on to the greener landscape of Portland and All Classical Portland.

I started in radio when I was 17. Prior to L.A. I worked at stations in Orlando and Atlanta, and for six years I was a host and producer on Minnesota Public Radio’s national service, Classical 24. I grew up around New Orleans and Jackson, MS, and was a flute performance-turned-communications major at Ohio University, followed later by graduate school in philosophy at Purdue University. My first post- college job was as a music engineer in the early 90s Atlanta hip hop scene.

In addition to working at All Classical Portland, I teach philosophy at Portland Community College, and I’m a certified yoga instructor. I live with my husband Brice in SE Portland.

Brandi is on the air 10 am to 2 pm weekdays, and 3 am to 8 am Saturday at All Classical Portland. She also hosts Played in Oregon Sundays at 1 pm.