Artists In Residence is a program designed to foster creative and professional growth for emerging and established artists. Launched in 2019, the Young Artist in Residence (YAIR) and Artist in Residence (AIR) positions provide selected musicians and composers with access to All Classical Portland’s world-class facilities and studio time. Artists also enjoy opportunities to expand and deepen engagement with audiences, including on-air performances on Thursdays @ Three, appearances at station events and concerts, features on special broadcasts, and recordings of new works.

Artists are encouraged to pursue creative research projects and to publish related articles about their work through All Classical Portland’s wide-reaching platforms. Young artists will also meet with current or former AIRs for mentorship and guidance as they grow their careers and establish their artistic ventures. All artists receive a scholarship award to assist in their projects, performances, and continued studies. The residencies are designed to support musicians and composers in pursuit of new projects and ideas and to take creative risks.

All Classical Portland’s Artists in Residence:

Maggie Carter began double bass lessons at age nine with former Oregon Symphony bassist Nina DeCesare and currently studies with Jordan Anderson, Principal Bass of the Seattle Symphony. She is in her fourth year in the Portland Youth Philharmonic, where she is the Principal Bassist. Also a serious pianist, she in her eighth year of piano studies. In 2019 Maggie won the International Society of Bassists 14-and-under Solo Competition. She was the first prize winner of the 2020 Oregon Mozart Players Young Soloists Competition and the 2021 Oregon ASTA Solo Competition. In 2019 and 2021, Maggie was the runner-up in the PYP Concerto Competition and recently performed Bottesini’s Double Bass Concerto No. 2 with Camerata PYP. Maggie will attend Boston University Tanglewood Institute this summer. She has performed for double bassists such as Edgar Meyer, Paul Ellison, François Rabbath, and John Clayton, among many others. 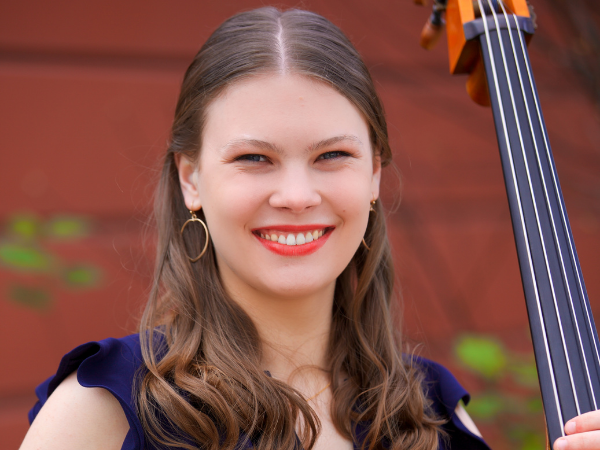 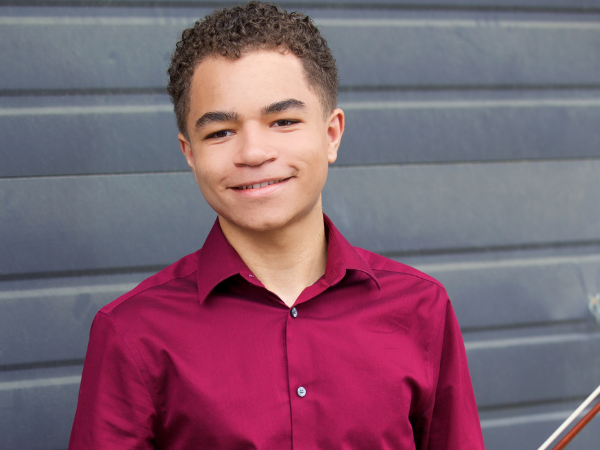 Noah Carr’s interest in violin began when he was two years old. Now a sophomore at Grant High School in Portland, OR Noah is a part of the Metropolitan Youth Symphony (MYS) and its MYSfits Ensemble. He studies violin with Tomás Cotik, Professor of Violin at Portland State University. This past year, he won second place in the Oregon ASTA competition and first place in MYS’ Concerto Competition. Since 2018, he has attended Sphinx Performance Academy every summer at The Juilliard School and Curtis Institute of Music. He will be attending Meadowmount School of Music in New York this summer. A passionate supporter of diversity and inclusion in classical music, Noah wrote two spoken word and musical programs in 2018 and 2020 documenting his experiences as a classical musician of color. After he graduates from high school, he plans to attend a music school and pursue violin professionally.

Diego Fernandez is a young flutist from Salem, OR, currently attending South Salem High School as a junior. He started playing the flute in 6th grade. In 2018, when he was in 8th grade, he began to study with Dr. Abigail Sperling from Linfield College. Diego won 2nd place in the 2018 Greater Portland Flute Society, 1st chair in the 2018 Salem Keizer’s All-City Honor Band, and was the District Winner in the 2021 Solo and Ensemble festival. In 2021 Diego also began to study with Martha Long from the Oregon Symphony. He currently serves as the Second flute and piccolo of the Portland Youth Philharmonic, and Principal Flute in both the South Salem Wind Ensemble and South Salem Symphony. He was a featured soloist with the Central Oregon Symphony, and placed 2nd in the GPFS Young Artist Competition in 2022. 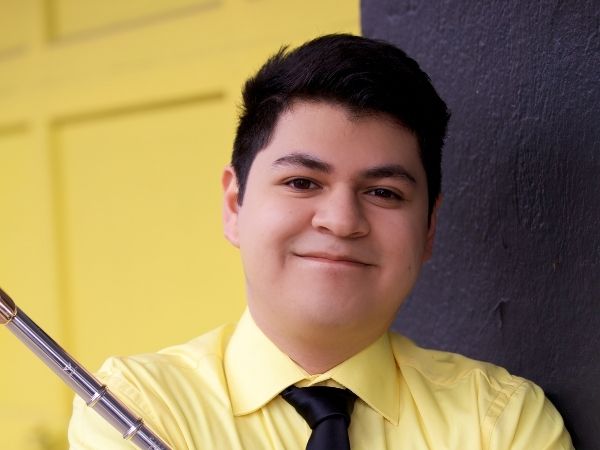 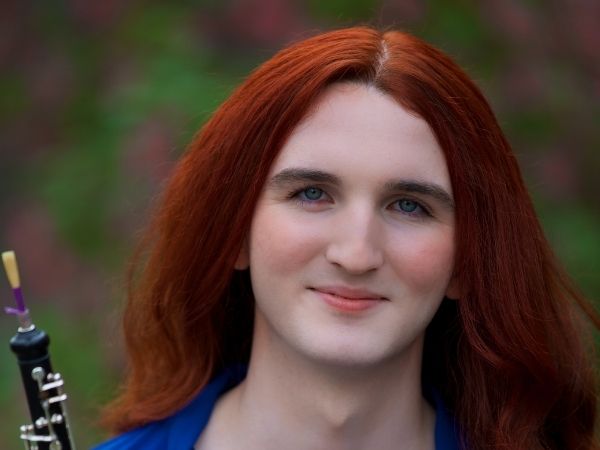 Ben Price, a senior at Grant High School, has studied oboe for 8 years with Karen Wagner and previously with Dagny Rask Regan. Currently the Principal Oboist of the Portland Youth Philharmonic and a section oboist with the Vancouver Symphony Orchestra USA (VSO), Ben is a past winner of concerto competitions with the VSO, Metropolitan Youth Symphony (MYS), and Oregon Sinfonietta. Ben has performed as principal oboist with the MYSfits Chamber Orchestra, Orpheus Academy and Pink Martini. A four-time participant in the Northwest Oboe Seminar, Ben is also the current Oregon State Solo & Ensemble Champion for oboe. Ben has been selected to the National Youth Orchestra of the United States of America three times, and will study Oboe Performance with Katherine Needleman and Philippe Tondre at the Curtis Institute of Music beginning in fall 2022.

Nate Strothkamp is an 18-year-old violinist from Portland, OR. A current student of Carol Sindell, Nate has appeared as a soloist with the Oregon Symphony and Beaverton Symphony Orchestra. Nate was one of seven national finalists in both the 2021 and 2022 iterations of the MTNA Senior String Performance competition, after winning first place at the State and Division rounds. He also won first place in the Teen Strings category of the Music International Grand Prix competition. Nate serves as co-concertmaster of the Portland Youth Philharmonic, and is dedicated to pursuing equitable music education through his work as executive director of Project Prelude, a student-led organization providing free violin instruction to elementary students from economically disadvantaged schools in Beaverton. Additionally, he co-founded Musicians for Equality, an organization that promotes inclusivity and representation in the classical music industry. Nate is a senior at the Oregon Episcopal School, and next year, Nate will continue academic and musical studies as a freshman at Yale University. 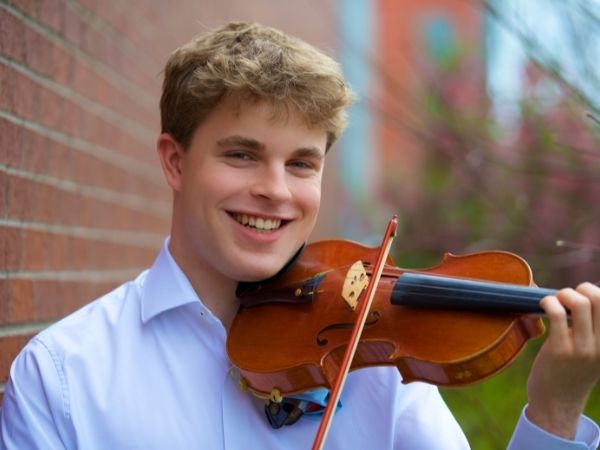 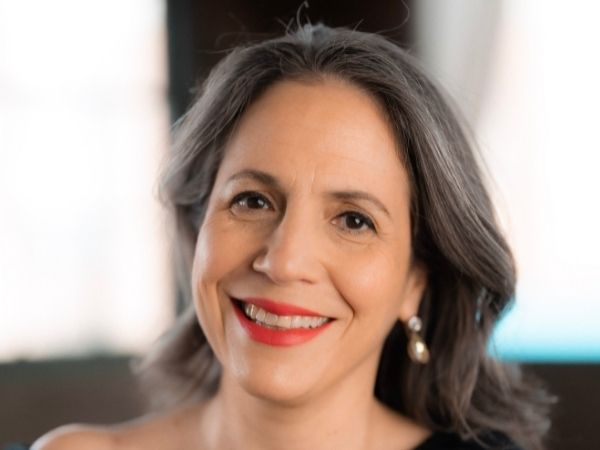 María García began piano studies in her native Puerto Rico at the age of four. She received a Bachelor of Music with Distinction in Performance from the New England Conservatory of Music. Graduate studies followed at SUNY Stony Brook where she received a full merit scholarship and completed a master’s degree in Music. An active chamber musician and soloist, García has performed throughout the United States, the United Kingdom, Germany, the Czech and Slovak Republics, Israel, Venezuela, Tunisia, Puerto Rico, and more. Locally, she is a sought after collaborator, and music teacher. María performs with groups like the Oregon Symphony, Third Angle Ensemble, 45th Parallel, and is part of the Award-winning highly praised 20 Digitus Piano Duo with Momoko Muramatsu.

Jasmine Barnes is a Baltimore native and a multifaceted composer who embraces any writing style of music using a variety of instrumentation and specializes in writing for the voice. She has been commissioned by numerous organization, and her 10 minute opera, “The Late Walk,” has been archived in the Library of Congress. Jasmine is also an honored educator, and previously served as Head of Compositional Studies and Jazz Voice Studies at Booker T. Washington High School for the Performing and Visual Arts in Dallas, TX. Now a full time composer, Barnes has held many residencies including a composer fellowship at Chautauqua Opera, and was recently commissioned by The Washington National Opera in celebration of the Kennedy Center’s 50th year anniversary. Upcoming, she will serve as a first year resident artist for American Lyric Theater’s Composer Librettist Development Program in New York City. Artist selected in partnership with Bodecker Foundation. 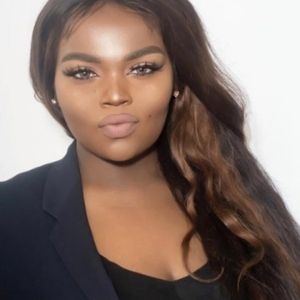 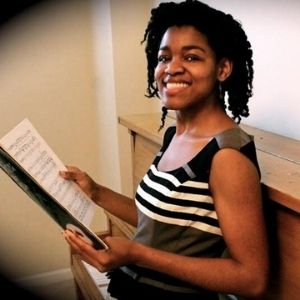 Lauren McCall is a composer and educator from Atlanta, Georgia. She has had compositions performed around North America and in Europe, including her piece for piano, Shake the Earth, which was performed at the Morehead State University’s Contemporary Piano Festival, along with being performed in Eugene, Oregon at the Oregon Bach Festival Composers’ Symposium. Her arrangement of the spiritual I’m Troubled was performed in Lakeland, Florida at Florida Southern College for the Grady Rayam Prize in Sacred Music, and her graphic score composition The Fish Wife was performed in Montreal, Canada by the ensemble Amis Orgue Montreal. Artist selected in partnership with Bodecker Foundation.

Cuban composer and educator Keyla Orozco’s international career has made her recipient of the Guggenheim Fellowship, Fromm Music Foundation Composition Grant (Harvard University), Cintas Fellowship, and MacDowel Residency Fellowship, among other awards. Orozco has been commissioned multiple times in the Netherlands and the US, and her works have been performed by internationally acclaimed ensembles. Orozco graduated in Composition at the University of the Arts in Havana. Later, she followed advanced composition studies at the Royal Conservatory of The Hague and Conservatory of Amsterdam. Artist selected in partnership with Bodecker Foundation. 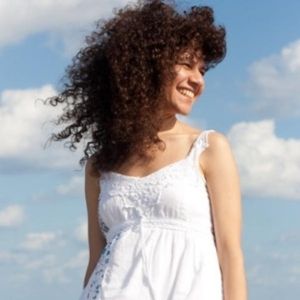 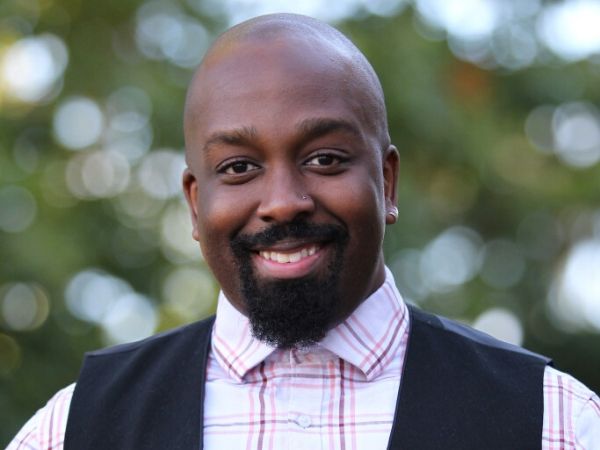 Adam Eccleston is an accomplished flutist of international renown dedicated to promoting diversity and equity in classical music. As a soloist, Adam Eccleston has appeared with several orchestras around the United States and Europe, and has performed in venues such as the Kurhaus Wiesbaden in Germany and Jordan Hall in Boston. Adam draws musical inspiration from his Caribbean and Panamanian heritage. He works extensively with MESDA group, a non-profit organization active in underdeveloped countries around Central and South America and the Caribbean Islands. Eccleston serves as the Director of Orchestras at BRAVO and is also co-founder of the duo From A to Z with Mexican-born guitarist Zaira Meneses.

Natalie Tan is a senior student at Jesuit High School in Portland, Oregon. She has studied piano for eleven years and is currently a student of Linda Barker. Natalie is a two-time winner of MetroArts Inc.’s Young Artists Debut! Van Buren Concerto Concert (2017 & 2020), and winner of the 2017 PYP Biennial Piano Concerto Competition. Natalie serves on Jesuit High School’s mock trial team and is in her fourth year as an intern at OHSU. In addition to her passion for music, Natalie loves to travel, discuss science and policy, and analyze literature. Artist selected in partnership with Metro Arts Inc. 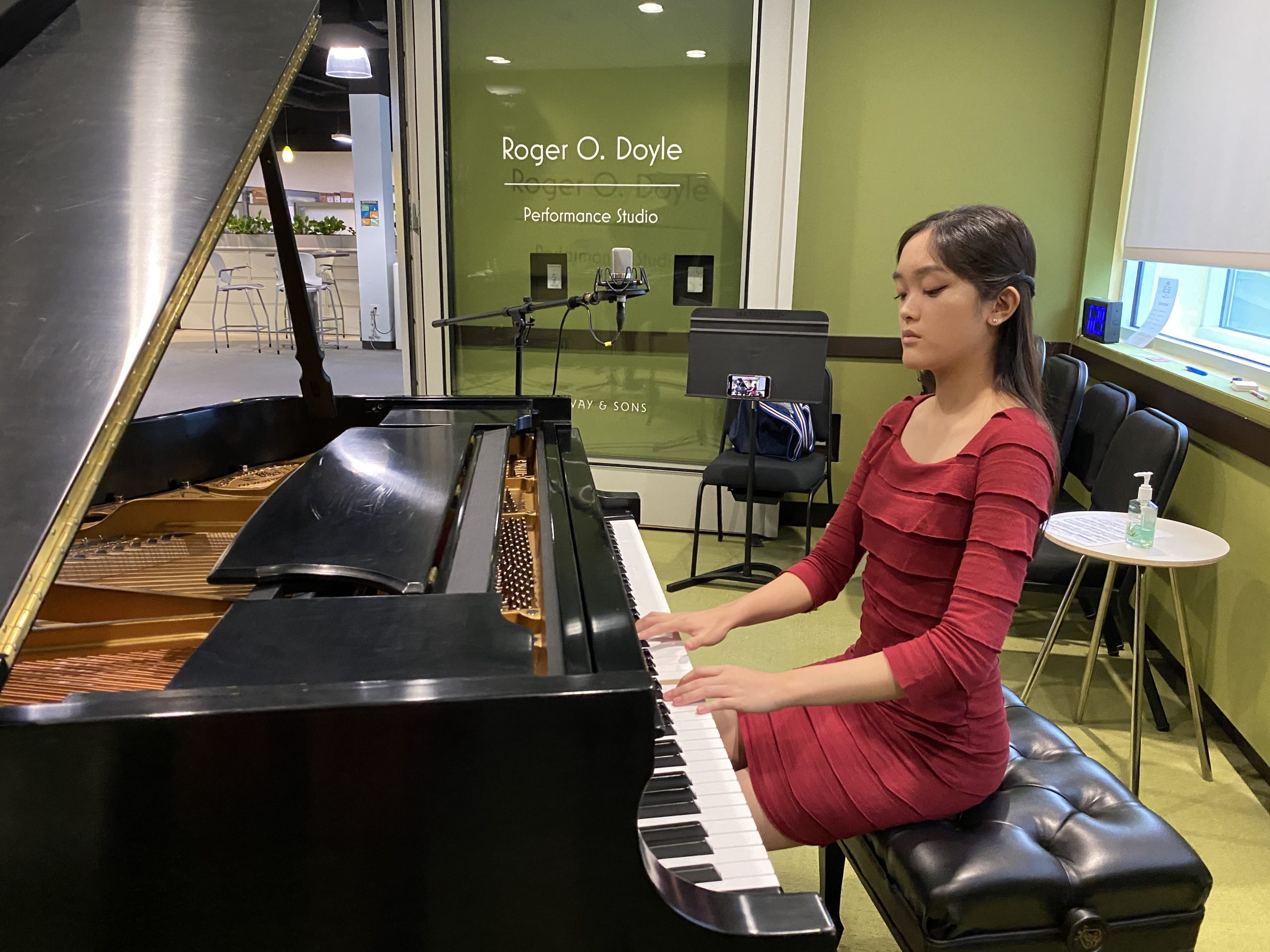 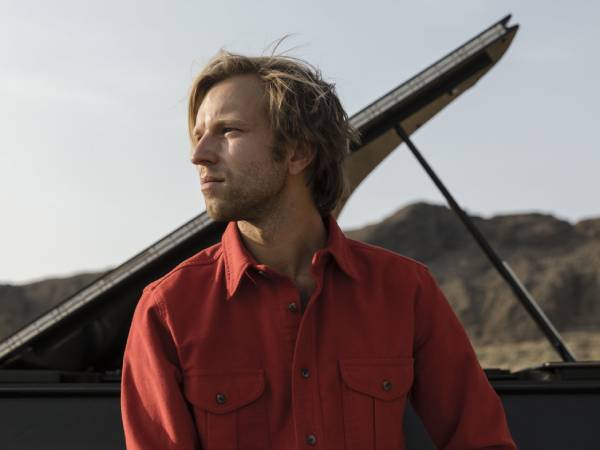 Internationally acclaimed concert pianist Hunter Noack integrates literature, visual art, dance, theater and design in his presentations of classical music. Through the IN A LANDSCAPE: Classical Music in the Wild outdoor concert series, he brings a 9-foot concert Steinway into the wild where state and national parks, historic sites, and other spectacular locations replace traditional concert halls. Listening to the live music through wireless headphones, the audience is free to wander through the landscape. Winner of the Los Angeles International Liszt competition in 2011, Noack holds degrees from Guild Hall (London), University of Southern California, and San Francisco Conservatory.

Taylor Yoon is a junior and a principal cellist at Lakeridge High School. Taylor and her older sisters perform as the “Yoontrio”, often raising funds to support local charitable causes. In 2017, Taylor helped establish a nonprofit organization called Olivenbaum in an effort to bring all people together in peace and harmony. Winner of Oregon Cello Society Scholarship Competition in 2010, and Trula Whelan Concerto Competition in 2011 & 2014, Taylor currently studies with Mr. Ken Finch. Artist selected in partnership with Metro Arts Inc. 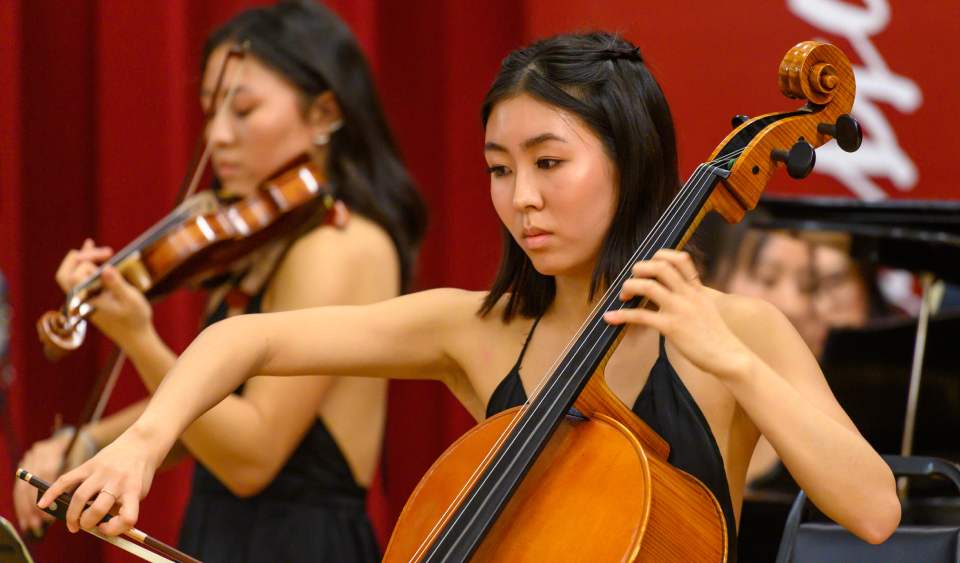