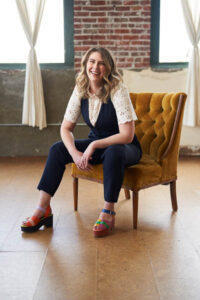 I’ve always been a curious human-being. Taking things apart and then trying to put them back together (sometimes successfully, sometimes… not so much) is inherently in my genetics. Naturally I was interested in seeing what went on behind the curtain in audio storytelling. While I was tinkering around with audio software in college, I realized radio could be the career path for me. Once I graduated from Columbia College Chicago, I immediately did the next logical step and boarded a plane to Melbourne, VIC, Australia. Where I did NOT get a job in radio however when I returned to the states I was hired as a production assistant at WFMT in Chicago. There, I used my technical abilities to perform various tasks from to grabbing water for Joshua Bell to burning discs to engineering recording sessions with Renée Fleming. During my time in Chicago, I worked on content for Lyric Opera Broadcasts, Grant Park Music Festival, and produced the Deems Taylor Award winning program Relevant Tones.

In 2015 I started my own podcast, List’d, which I produce and host. List’d investigates the anonymous world of Craigslist by interviewing the posters and tracks down the missing objects of affection.

Outside of radio, I’m busy collecting hobbies. I’ve made a toolbox in woodworking, paper in papermaking, art in screen printing, and many, many jokes in improv classes. I hope to own a dog named Kevin in the near future.