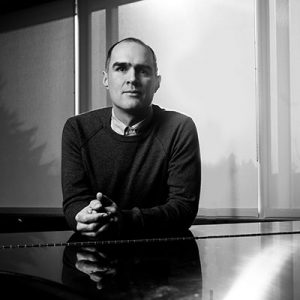 The son of a piano teacher and a percussionist, music has always been part of my life.
An avid runner, multi-disciplinary cyclist, and extreme hobbyist photographer. I spend weekends in the wilderness with the bears or in the basement darkroom.

John’s guest is Jerod Impichchaachaaha’ (Im-pih-CHAH-chah-ha) Tate, whose 2009 composition, Lowak Shoppala’ (LO-wak SHO-pah-la), an epic retelling of Chickasaw stories, received its world premiere recording this year. Jerod shares his own stories of growing up in a household of Western classical music, and strong ties to his indigenous roots as well. Buy “Fire and Light”… More

John interviews Randall Goosby, whose debut on the Decca label, “Roots,” was released this summer (and is being played on All Classical Portland regularly). The disc is an exploration of music written by Black composers and of composers inspired by Black American culture. Randall tells John Pitman about the importance and responsibility of bringing underrepresented… More

John Pitman, director of Music and Programming at All Classical Portland interviews Portland composer Kenji Bunch about an important world premiere happening a few states away, at the Moab Music Festival in Utah, on September 4. Inspired by the autobiographical accounts of the incarceration of United States citizens – Japanese-Americans, in World War II –… More

On November 19, 2020, All Classical Portland will broadcast the world premiere of two new works, commissioned by the station in June: a string quartet by composer Damien Geter, and a poem by writer and Creative Revolutionist™ S. Renee Mitchell. “These collaborations are a continuation of All Classical Portland’s commitment to building a more diverse… More

Many people know John Mauceri from his work as conductor for the Hollywood Bowl Orchestra. What is less known is that the orchestra was re-created after a forty-year gap just for him to conduct. He has conducted around the world in a variety of classical formats, and is also an academic and an author. I… More

The Temple of Glory: Conductor Nicholas McGegan realizes a dream

British-born Nicholas McGegan has been directing San Francisco’s Philharmonia Baroque Orchestra since the 1980s (about the time that this interviewer started in radio), and has had many sweet successes during that time in bringing great Baroque works to audiences around the world.  One of the sweetest for McGegan happened just a few years ago, when… More

The great 20th century cellist, Pablo Casals, was the first in the world to record all six of Bach’s suites for unaccompanied cello.  This was in 1939.  Before this, people only considered the suites as study pieces.  Casals proved them wrong, and now the suites are among the most beloved works for the instrument of… More