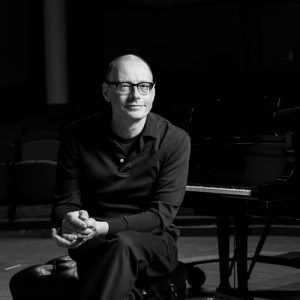 When I visited Portland for the first time I decided that I wanted to live here. It would take about 15 years before I pulled it off. Similarly, I first got involved in radio (a four-hour classical shift twice a week) during my freshman year of college in my hometown of Sioux Falls, South Dakota. It really was a blast but almost two decades would pass before I returned to radio, joining the staff of KCUR (the NPR affiliate in Kansas City) as an announcer and producer.

During those two overlapping intervals, I managed to cover a lot of ground: working as a writer, editor, actor and voice over artist in San Francisco, New York, Chicago and Seattle. One recurring theme throughout that time, and my life in general, has been music, whether I was participating in it as a singer, writing about it, or appreciating it from the audience.

The world can be a crazy mixed up place, but with luck you arrive where you're supposed to be. And I do feel very lucky to be able to work with radio heroes of mine at All Classical Portland, an outstanding broadcast service in a great city.