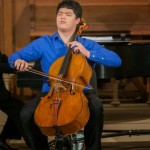 17-year-old cellist Daniel Kim won first place in Oregon’s State Solo Competition this year; we’ll hear his winning performance of the finale to Saint-Saens’ Cello Concerto No.1 in this episode of “On Deck with Young Musicians.”

Daniel also loves pop music (he named his cello “Shakira” after the curvy pop singer), and he is a proud Korean-American (who eats his mom’s kimchee with every meal).

Daniel laughs easily, and has a charming positive attitude. He loves history and music, and in this episode of “On Deck” he’ll talk about what his future may hold.

Here is Daniel’s winning performance of the Saint-Saens, on May 3, 2014: