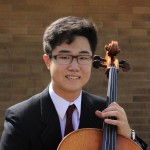 Harry Kim is a 17-year old cellist. He performed Elgar’s Cello Concerto with the Oregon Sinfonietta in October – he won that organization’s concerto competition.  But that wasn’t the first time Harry has performed as soloist: he played the opening movement of the Dvorak Concerto with the Jewish Community Orchestra in 2014.  He has also been principal cellist with the Portland Youth Philharmonic for three seasons.  So, you get the picture: Harry is a really talented young musician.  But he doesn’t have any interest in pursuing a musical career.

In this episode of “On Deck” we’ll meet Harry, hear excerpts of those two solo performances, and learn why he enjoys both golf and contemporary music.