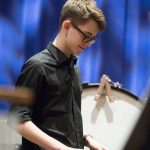 On Deck with Jake Safirstein

Jake Safirstein is a classical music fanatic. He is a percussionist with the Portland Youth Philharmonic, but he also takes conducting AND composition lessons (with Norman Huynh and Kenji Bunch, respectively). At age 17, he has already had commissions from fEARnoMUSIC and the Metropolitan Youth Symphony. This year, he will forego his senior year at Grant High School (Portland, Oregon) to attend the Interlochen Arts Academy boarding school in Michigan.

Though it seems that classical music is really all Jake thinks about, he is also really into stand-up comedy.  In this web-exclusive excerpt, you can hear him describe how comedy helped him through a hard time in his life: