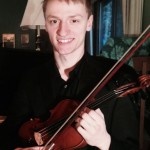 On Deck with Jonathan DeBruyn