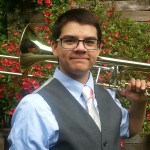 Spencer Schaffer is a 17-year old trombonist who LOVES classical music. He listens to All Classical Portland all the time, and he plays his trombone at every opportunity: at school, in small ensembles, with the Portland Youth Philharmonic. In fact, he plays *so much* that he has developed tendonitis, which makes it hard for him to keep doing what he loves.

In this episode of On Deck, Spencer talks about that pain, as well as about his upcoming solo with the Portland Youth Philharmonic (May 3) in which he’s playing a little-known piece called “The Bearded Lady” by Jose Berghmans.

« On Deck with John Fawcett
On Deck at Northwest Band Camps »