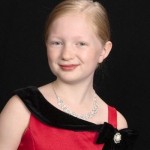 In this episode of “On Deck” we’ll meet the youngest musician to have been featured on the show: 11-year-old Sylvia Romero. (Just because she’s young doesn’t mean she’s quiet and shy, though – Sylvia is hilarious and is always performing.)

Incredibly passionate about ALL the arts, Sylvia is studying opera with Hannah Penn and ballet at the Oregon Ballet Theater.

Sylvia will be giving a recital at The Old Church in Portland on Friday, August 29, 2014.

In 2012, in advance of her performance at The Grotto, Sylvia appeared on KATU’s “AM Northwest”