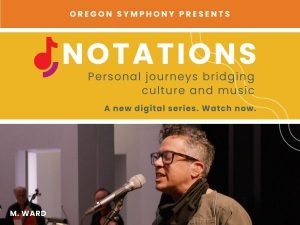 Every musician’s story has a beginning. That first note, that first instrument, that first song. It is unique to the artist, often inspired by their heritage, personal history, and journey in life.

Over the course of Notations, Oregon Symphony’s latest digital series, you will experience the deep connection between musical expression and culture through the lens of five local musicians whose stories are poignantly shaped by music. The cultural landscape of America is rich and complex, and through these featured artists, Notations will examine how personal histories inspire creative work.

Each featured artist will share the unique cultural background that has influenced their music, with each episode culminating in a musical performance.