Kassiani: The Enduring Works of a Trailblazing Female Composer

Kassiani, sometimes called Kassia, was an abbess, a poet, and a composer in 9th century Byzantium, and she is the earliest female composer whose music has survived to the present day. In this article, we’ll explore Kassia and her music, the enduring works of a trailblazing female composer.

Kassia was born between 805-810 CE to a wealthy family in Constantinople. Chroniclers of the time period claim that her beauty, intellect, and social standing resulted in her being considered to marry the future Emperor Theophilos.

The story claims that Theophilos said to her: “Through a woman came forth the baser things,” in reference to Eve.

To which Kassia responded: “And through a woman came forth the better things,” in reference to Mary. 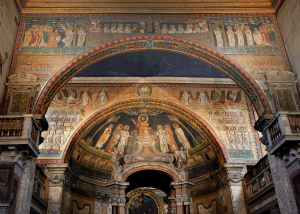 An example of 9th century Byzantine Art and Architecture.

Theophilos married someone else, and Kassia founded a convent. Kassia was outspoken against him during his reign as he caused the second iconoclastic period of the Byzantine Empire, which ended with his death in 842 CE.

Iconoclasm is a frequent feature of religious history, in which one group believes in art (specifically icons) of holy figures, while an opposing group believes that such icons and the veneration of them amount to idolatry. Iconoclasms (difference of belief aside) have resulted in the destruction of a great deal of art over the centuries. Icon veneration in Byzantine was officially restored by another notable woman, Theophilos’ widow Empress Theodora, a year after his death.

During this iconoclastic period, Kassiani is recorded as having said, “I hate silence when it is time to speak.” Outside of her religious compositions, she wrote some two hundred secular verses of poetry, some of which point out injustices or hypocrisies she saw in her contemporary world. Kassia traveled from Constantinople to Italy, before settling in Greece and dying sometime between 867-890 CE.

Kassia is recognized in the Orthodox Church for genuine religious devotion, many of her works being hymns and twenty-three being in the Church’s liturgical books. However, it’s also theorized that she may have joined the church and started her convent because it helped ensure the survival of her works. 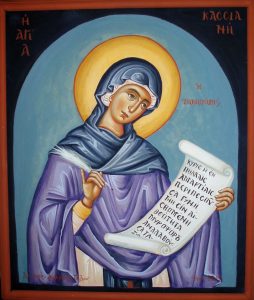 Depiction of Saint Kassiani in the style of a Byzantine icon, holding a quill and paper.

And survive they have. Her works have endured well relative to any single composer from medieval times, but especially for female composers from any time period. Women in the historical record are often excluded or downplayed, either through purposeful censorship or unthinking omission, and women in arts history are no exception. Even without prejudices in play, history is a filter and luck can decide what passes through. Despite not knowing exactly when she was born, having an almost thirty year period where it is thought that she could have died, we know what her songs sound like. We are over a thousand years removed from her, but we can listen to them still.

It is notable that she wrote in her own name at all. So often the obfuscation can start before anyone besides the artist interacts with the work, countless compositions and writings coming from pseudonyms or simply ‘anonymous.’ Yet, we have her name, in fact we have multiple names for her: Kassia, Cassia, Kassiani. We have pieces of her story. Not only is her name assigned authorship in her works but the most famous of them, a piece sung at matins on Holy Wednesday, is called the Hymn of Kassia. Many people make a point of coming to the service just to hear her music. It is beautiful and haunting, and you can listen to it below.

Our friends at Cappella Romana, the local (and internationally renowned) choir, will be releasing their new CD, Hymns of Kassiani, on April 16!

Tripolitis, A. (1992). Kassia : The legend, the woman, and her work. New York: Garland Library of Medieval Literature.