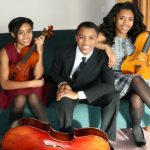 300 Watts String Trio consists of three siblings: 16-year old violist Shania Watts, 14-year old cellist Jonathan Watts, and 12-year old violinist Darah Watts.  In the four years they have been playing together as an ensemble, they’ve created a number of their own arrangements born of improvisation and their varied musical interests (jazz, latin, and eastern music influence their creations).

As you might imagine, though, being a sibling ensemble can be tricky; in this episode of “On Deck” the three Watts kids talk animatedly about the disagreements that can crop up when creating art together.

You’re going to love these kids.  Click the audio link above to listen to the episode as it was broadcast on All Classical Portland, and click below to hear an outtake of Christa’s conversation with the Watts siblings in which they discuss Jonathan’s obsession with cars:

You can view more videos at their YouTube channel and learn more about them at the 300 Watts Trio website.