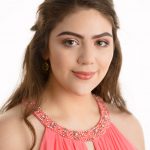 If Tara’s name sounds familiar, it’s probably because she was interviewed less than a year ago when she came to Christa’s attention as a member of the Pacific Youth Choir. Tara has now, though, won a spot on this year’s MetroArts Young Artist Debut concert, which means we have the opportunity to catch up with her again.

Tara is a mezzo-soprano who has just returned from a whirlwind series of college auditions across the country.  She, of course, had to audition for a spot on this MetroArts showcase, too.  We’ll talk about the rigors of auditioning, and her decision to pursue music as a career — despite the fact she has only been singing for a few years.

You can hear Tara’s previous interview (from April 2016) here.