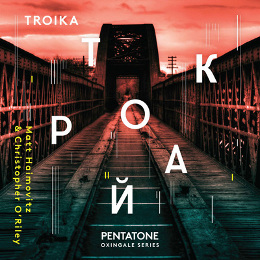 Cellist Matt Haimovitz has never been content to just “be quiet and play the music”. That statement, often fired at musicians when they express their opinions, has been heard with greater frequency in recent years. One could argue that a musician is paid to play; but it can also be argued that music as an art form, exists to express ideas as well as emotions. Mr. Haimovitz lets the music speak for itself, and convey some sense of the times in which we live. “TROIKA” anchors itself on three great 20th century Russian composers, each of whom composed great works for cello. The “iconic triumvirate” is how they describe Rachmaninov, Shostakovich and Prokofiev, whose monumental cello sonatas form the main structure of the 2-CD set. The program is political in the sense that these works are documents of a country that has seen tremendous change in its 100 years since the Bolshevik Revolution.

Haimovitz is joined by pianist Christopher O’Riley (the two are known for their critically-acclaimed CD of Beethoven sonatas played on period instruments), and the two are natural musical partners. Chris and Matt also create compelling programs, as TROIKA doesn’t just present three Russian cello sonatas and leave it at that. They incorporate their own arrangements of shorter, popular works by these Soviet-era giants, as well as more contemporary songs by Russian pop singers Viktor Tsoi (“Kukushka”), and the Russian feminist band Pussy Riot’s song about Vladimir Putin. TROIKA has music that documents the past as well as the present, but above all, is excellently and passionately and creatively performed by Matt Haimovitz and Christopher O’Riley.