From the Gorge to Mt. Hood, the Alvord Desert to Crater Lake, Oregon provides unique geological and ecological sites with incredible diversity in flora and fauna.  Even with nature all around us, we can sometimes forget to appreciate it in urban spaces or in our own backyards. For Earth Day, we’d like to show appreciation for some of the best natural music-makers we get to listen to every day. 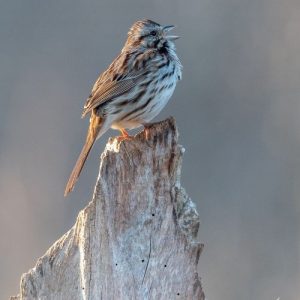 Courtesy of Patrice Bouchard from Unsplash

These birds could be the poster-chick for songbirds. Common across much of the Western United States and across all seasons, they are usually found in thickets, marshes, and gardens. Their colors can vary across the continent, but in the Pacific Northwest they are generally reddish-brown with a white belly, and a spotted patterning. They eat mostly seeds and insects, and in coastal marshes they sometimes eat small crustaceans. They nest under or on low shrubs, or other vegetation close to the ground. Their song generally consists of three short notes and a trill. 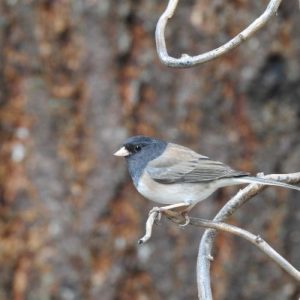 These birds are common all year throughout the Pacific Northwest, making them a staple of backyard bird songs. They can be seen in suburban areas as well as on the edges of woodland areas. They stay in semi-open areas with thick vegetation that also have clearings nearby. The most common plumage is grey and white, but they can also have various patterns that are reddish-brown. They eat mostly insects foraged on the ground, but they don’t turn their beak up at seeds or berries. Their nests are almost always on the ground hidden under foliage or rocks. Their song is a ringing trill, sometimes softer in flight. 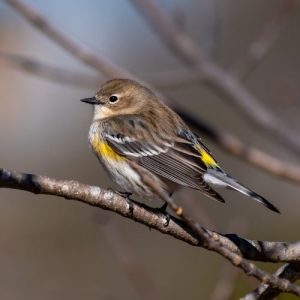 Courtesy of Trac Vu from Unsplash

These birds like woodlands and streams, but then again, don’t we all? In the West they like to have their breeding season in coniferous, mountain forests. Their coloring is mostly white, black, and brown, but they get their name from the striking bits of yellow peeking out. They eat mostly insects and berries, helping with garden pests such as aphids, wasps, and gnats. They can sometimes be seen flying out of a tree to catch a bug in mid-air. They prefer to nest in trees, on branches or in the fork between a branch and the trunk of the tree. Their song, as the name might suggest, is a high pitched warble. 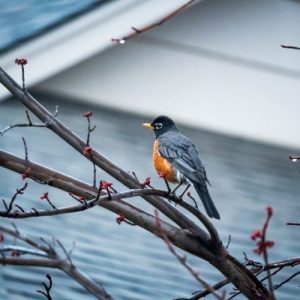 Courtesy of Evan King from Unsplash

The robin is so familiar and widespread, that when we don’t see it in areas where humans live it can be a warning sign of environmental problems. From cities to rural farmlands, across a variety of climates, they are a constant companion in the outdoors. Mostly dark and light grey, they can be easily spotted by their orange belly. Their eggs are the iconic ‘robin’s-egg blue’, although they can vary slightly in paleness. They eat insects, fruit, and earthworms, as well as snails and slugs. They nest in trees and shrubs, but also on porches and windowsills, barns and bridges. Their song is caroling, with cheery notes that rise and fall. 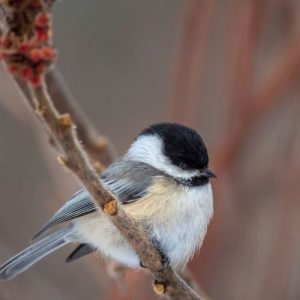 Courtesy of Patrice Bouchard from Unsplash

These birds are common across the Western United States. They are very active little birds, and can be seen and heard even in winter. They generally live in open woods or on the edges of forests, and they have a preference for deciduous trees. They can also sometimes be found in suburban areas. Their plumage is white, grey, and light brown, with the black and white pattern on the head giving them their ‘black-capped’ appearance. They eat mostly insects, fruit, and seeds, and are eager visitors to birdfeeders. They nest in small holes in trees, from a woodpecker or rotting wood, and will happily habitate a nesting box. Their song consists of 2-4 whistles, but they’re more easily recognised by their call which is said to sound like ‘chick-a-dee-dee-dee’, hence their name. 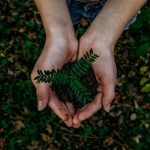 Courtesy of Noah Buscher from Unsplash

If these birds are around making music, they probably already like your backyard, but you can always attract more birds by making it an even better habitat! Take a look at this helpful guide from the Portland Bureau of Planning and Sustainability on indigenous plants for the area. Portland Audubon Society and the Columbia Land Trust have also partnered on the Backyard Habitat Certification Program, which can help give detailed guidance for and acknowledgement of spaces that support local wildlife.