Celebrating Composers Who Emigrated to America

In “Coming to America: Composers Speak Out,” Theodore Wiprud interviewed a group of composers who had emigrated to America. When he asked composed Jin Hi Kim how “being a newcomer in America affected [her] career,” she discussed a unique opportunity for artists to share and collaborate in this multicultural country.

“It is only in America that it is possible to bring together artists with different voices and create a new aesthetic. There are many non-Western musicians spread throughout the country who perform their traditional music as well as create new pieces with others. It is an invaluable experience for a composer to meet so many different musicians in a single city like New York and to collaborate with them.”

This list represents just a small sampling of the “different voices and new aesthetics” that émigré composers have brought to the United States. 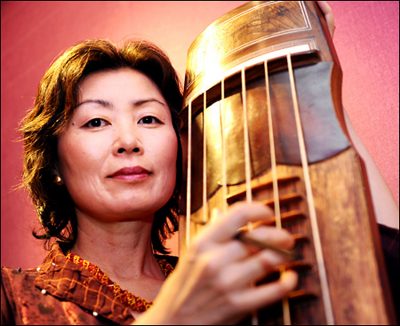 Jin Hi Kim (b. 1957) is both a composer and a virtuoso of the komungo, a historic Korean stringed instrument. She has received commissions from prestigious institutions such as the Kronos Quartet, the National Endowment for the Arts, and the American Composers’ Orchestra. She has also performed her own compositions throughout the world, including Carnegie Hall, The Kennedy Center, and the Metropolitan Museum of Art in her adopted country of America.

Kim emigrated in 1980, after studying traditional historic court music in South Korea. In her own words, she traveled to the United States because,

“At that time Korea was becoming more interested in Western music than in its own traditions. It was my dream to balance out this attitude and combine Korean and Western instruments in a new kind of music. I need to learn Western music, so I came to the US in 1980. I stayed because of opportunities here to compose and perform.”

Kim often performs on an innovative electric komungo (the “world’s only” one, as her professional biography notes). She plays it in this mesmerizing performance of her improvisational composition, Pale Blue Dot, with percussionist Gerry Hemingway.

Read more about Jin Hi Kim on her website. 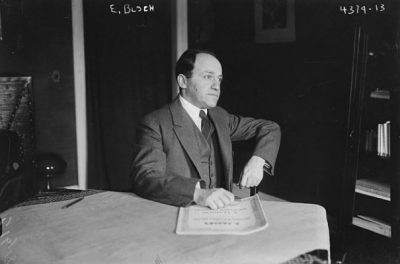 —Ernest Bloch, as recalled by his daughter Suzanne Bloch (quoted in Voices in the Wilderness: Six American Neo-Romantic Composers by Walter Simmons)

Ernest Bloch (1880-1959) was born in Switzerland and studied music in Geneva, Frankfurt, Munich and Paris. He developed a personal style rooted both in the Impressionism modeled by his mentor Debussy, and in the expression of his deeply-felt Jewish identity. Bloch came to America in 1916 for a conducting performance, and soon emigrated with his family. He revisited his native country in the 1930s, but due to the the rising influence of Fascism in Europe, Bloch chose to return permanently to the United States. Bloch may be especially well-known to the Oregonian listeners of All Classical, because in 1939 he moved to Portland, and in 1941 he settled in Agate Beach, a coastal village near Newport, Oregon.

Bloch’s suite Poems of the Sea exemplifies his multicultural interests. He composed the suite in 1922 while he was living in Cleveland. He prefaced the work with a quotation from the iconic American poet Walt Whitman: the opening of “In Cabin’d Ships at Sea” from Leaves of Grass. With this American inspiration he weaves the sound of Debussy’s French musical Impressionism and of shtayger, traditional modes used in Ashkenazi synagogue music. 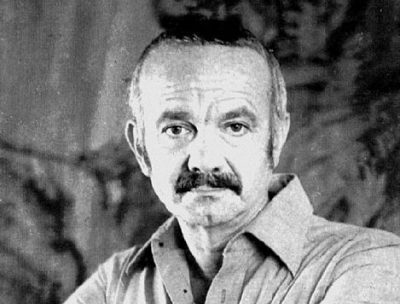 “I am a tango man, but my music makes people think, people who love tango and people who love good music. All ballet companies in the world are dancing my works. The jazz people love and enjoy what I do. Chamber groups that play classical repertoire are asking me to write for them.”

Astor Piazzolla (1921-1992) was three years old when his family emigrated from Argentina in 1924. They settled in Greenwich Village, where he fell in love with jazz. Astor developed into a child prodigy on the bandoneón. As a teen, he returned to Argentina where he studied tango by playing in the cafés of Buenos Aires. He also studied with classical Argentine composer Alberto Ginastera.

In 1954, Piazzolla was awarded a scholarship to study in Paris with renowned composition pedagogue Nadia Boulanger. Initially, Piazzolla worried that he should hide his tango experience from Boulanger, but in fact she encouraged his work in that genre. Piazzolla’s mature tango style came to be known as nuevo tango, and its elements are as diverse as Piazzolla’s experience. He fuses jazz, Argentine tango, modernism and counterpoint into a language all his own.

Piazzolla begins to play his bandoneón about halfway through this electrifying performance of his Libertango (composed 1974). 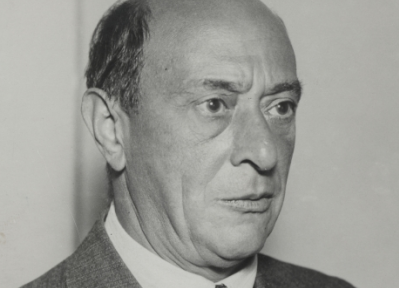 “I came from one country into another…where my head can be erect, where kindness and cheerfulness is dominating, and where to live is a joy and to be an expatriate of another country is the grace of God…I was driven into paradise.”

—Arnold Schoenberg, in “Two Speeches on the Jewish Situation (1934 and 1935),” in Style and Idea: Selected Writings

In 1933, Arnold Schoenberg (1874-1951) became one of many Jewish composers who fled Europe to escape the rising Nazi regime. In addition to Ernest Bloch, there was Kurt Weill who settled in New York, adapting brilliantly to American musical theater. Erich Wolfgang Korngold came to Los Angeles for good in 1938, becoming one of Hollywood’s most influential composers. Lukas Foss was fifteen when his family brought him to America to escape Nazism. Schoenberg ended up settling in Los Angeles like his friend Korngold.

Schoenberg initially felt somewhat out-of-place in his new country: the American music scene found his atonal style less accessible than Korngold’s neo-romantic music. However, Schoenberg did choose to become a naturalized citizen in 1941, and he influenced future generations of composers as a professor of music at UCLA. Schoenberg’s Kol nidre, Op. 39, is one of the most moving pieces he wrote after emigrating to the United States. 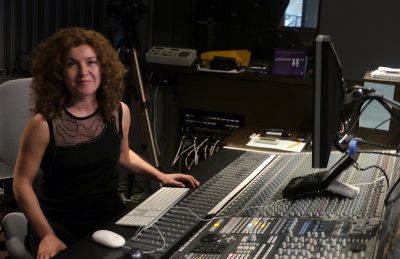 “Janis and I conversed about things that interested us and empathy came up right away, as did the need to really hear one another. I spoke about walking in someone else’s shoes – feeling wise – and how that impacts the strangeness in any relationship.”

—Svjetlana Bukvich, on the creative process behind her music for Janis Brenner’s Once You Are Not a Stranger, from a 2017 interview with Denise Marsa

In 1992, Svjetlana Bukvich received a scholarship to study electronic music at Rensselaer Polytechnic Institute. The Bosnian War has been raging in her hometown of Sarajevo for three months, and had effectively destroyed her successful career as a composer and pianist. She brought her scholarship letter to a bus driver evacuating people from Sarajevo, and the driver took her aboard, allowing her to leave safely and emigrate to the United States. In her book In Her Own Words: Conversations with Composers in the United States, Jennifer Kelly describes Bukvich’s music as “the result of an amalgamation of her experiences before the Bosnian War, her immigration to the United States during the war, and her subsequent time in the United States” (p. 195).

Esteemed as an educator and a leading electro-acoustic composer, Bukvich writes music with a unique blend of electronic, classical, rock and world influences, and she frequently collaborates in multimedia projects. In 2017 she wrote the score to Once You Are Not a Stranger, a multimedia dance work for the company Janis Brenner & Dancers, with art installations by Eva Petric. The company’s site explains,

“This interdisciplinary work looks at the ideas of empathy and “otherness” in a multicultural, multi-ethnic, and multi-religious world and uses the dance company as a microcosm of this world.” 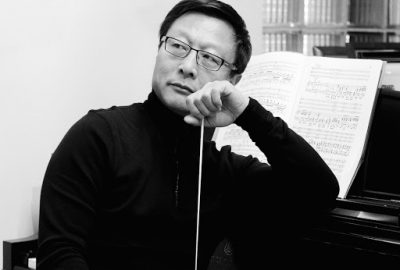 “String Quartet No. 5 is based on two very different musical motifs, like two strangers from different cultural backgrounds who meet and become fast lovers. Throughout their courtship, neither of them changes but they get to know and understand each other on a much deeper level. Most importantly, they learn to happily live with each other.”

—Bright Sheng, from his program notes for his String Quartet No. 5, “The Miraculous”

The musical training of composer Bright Sheng (b.1955) began with piano lessons from his mother in his native Shanghai. During the Cultural Revolution, when Western arts education was suppressed in China, he studied folk music extensively in the province of Qinghai. After the Cultural Revolution, he attended the Shanghai Conservatory, then emigrated to America in 1982 to study in New York. Sheng met Leonard Bernstein in 1985 and became one of his final students.

An award-winning composer of orchestral music, chamber music, and opera, Sheng’s works have been commissioned and performed by major orchestras all over the world. He is particularly known for integrating Western and Chinese musical ideas in his concert works.

In his program notes for his String Quartet No. 5, “The Miraculous” (2007), Sheng states that part of the work’s inspiration was The Miraculous Mandarin by another émigré composer, Bela Bartók. Sheng explains that while he admires Bartók’s composition, he “[does] not agree with Bartok’s almost-racist interpretation of what he saw as a ‘miraculous Mandarin.’” In his String Quartet No. 5, Sheng chose to create his own sonic concept of the miraculous, built on two motifs that he compares to “strangers from different cultural backgrounds” who “get to know and understand each other.” 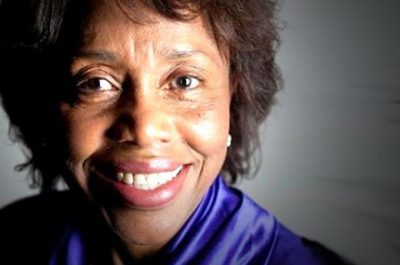 “I have maintained an independent stand in the way I have syncretized my sounds, I have a blend that I feel very comfortable with and this is very hard to explain to anyone. The sounds emerge from me just the way that my pronunciation of English always has a touch of an accent.”

—Tania Léon, quoted in “Immigration and the American Compositional Dream: Through the Lens of History” by Carol J. Oja

Composer, conductor and educator Tania Léon (b. 1943) emigrated to the United States from Cuba in 1967. She was the founding musical director of the Dance Theater of Harlem. In 2010 she founded Composers Now, an organization and music festival dedicated to encouraging new composers and promoting musical diversity. Léon is an award-winning composer, whose works range from music for dance, to chamber music, to her recent opera, The Little Rock Nine.

León’s Alma (Soul) for flute and piano was commissioned in 2007 by Maria Martin. In this wonderful video interview, León explains “what to listen for” in Alma. She compares the flute’s melody to that of a bird in the forest, flying through the piano’s texture like a bird flies through the leaves of a tree. She also explains that through the piece’s title, her image of flight can also reflect the meditative experience of the human soul.

Photograph from the University of Chicago Department of Music

“The term “immigrant” is just another way of labeling people, and though I am proud of my roots and my adopted homeland, I have been placed in so many categories in my life, that I am looking forward to the day I am introduced only as ‘Tania León’.”

—Tania Léon, interviewed in “Coming to America: Composers Speak Out” by Theodore Wiprud

“Composers in Exile” by Ben Winters in Music and the Holocaust.

“6 Composers Who Emigrated to the United States and Called Los Angeles Home” by Lucie Ticho, WFMT.