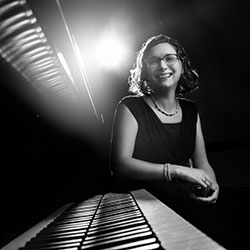 I am so glad to be part of the team at All Classical Portland. My delightful task is to help provide our hosts with research they can share regarding the cultural and historical context of our music. I find that when I learn about what a piece of music meant to the time and the people that produced it, the music starts to speak to me in a more personal and moving way. I hope that my work helps you find new connections with this music we love.

When I’m not busy researching, you’re likely to find me around our city singing and playing early music, or reading and painting in the cozy home I share with my husband Nathaniel and two spunky rabbits.

This Pride Month, we would like to share with you a short playlist of 20th and 21st century music exploring queer experiences. In this list, you’ll find songs, operas, and a symphony: some by LGBTQ+ composers, some exploring LGBTQ+ characters. You can also listen to a similar selection of music in this article’s companion playlist on Spotify.

Juneteenth at All Classical Portand

Saturday, June 19th was the 156th anniversary of the day news of emancipation finally reached the westernmost area of the former Confederate states in Galveston Bay, Texas. On All Classical Portland, we’re honoring this Juneteenth with music by African-American composers, and other composers of African heritage. Here are a few of the works you can look forward to hearing this Juneteenth.

The Songs of Lili‘uokalani, Queen of Hawai‘i

Lili‘uokalani (1838-1917) was the Queen Regnant of Hawai‘i from 1891-1893, and was the nation’s last monarch. During her reign, she resisted the annexation of Hawai‘i by the United States, and after the coup that deposed her, she remained dedicated to the interests of the Hawaiian people.   A trained singer, choir director and organist, Lili‘uokalani composed more than 150 mele, Hawaiian songs and chants. Her legacy of music remains greatly loved: she is one of the most-performed composers among Hawaiian… More

A Playlist of Music by Jewish-American Women

Composers, teachers, performers, conductors, singers, and cantors: the outstanding contributions of Jewish women to American music are ubiquitous. May is Jewish-American Heritage Month, and as part of our celebration at All Classical Portland, we hope you enjoy this playlist of music by remarkable Jewish-American women.  Check out our Spotify Playlist, which features these composers in a slightly different lineup of… More

Music is a natural complement to the poetry of Emily Dickinson (1830-1886). Her lyrical voice is often cast in the singable meters of American hymnody: for example, just try singing this Dickinson text to the tune of “Amazing Grace:” The Bee is not afraid of me. I know the Butterfly. The pretty people in the… More

A Playlist of Chamber Music by Women

All Classical Portland celebrates the music of Black composers and artists year-round, and this month, we invite you to join us as we take a closer look at the contributions that Black composers and musicians have made to classical music. Let’s meet a few of the artists whose music you’ll hear on the air this month,… More

Since the early days of opera, women composers have given us works with fascinating characters and unique perspectives. From Francesca Caccini’s 1625 opera, La liberazione di Ruggiero, to the latest installments of Shirley J. Thompson’s Heroines of Opera series, this list will explore just a few operas by women from throughout history. In these works,… More

Celebrating Composers Who Emigrated to America

In “Coming to America: Composers Speak Out,” Theodore Wiprud interviewed a group of composers who had emigrated to America. When he asked composed Jin Hi Kim how “being a newcomer in America affected [her] career,” she discussed a unique opportunity for artists to share and collaborate in this multicultural country.  “It is only in America… More

Some of classical music’s most charming repertoire has been music for, or about, children. Some classics, like Schumann’s Kinderszenen and Prokofiev’s Peter and the Wolf, are familiar favorites with audiences of all ages. In this list, we’ll explore a few familiar children’s pieces, as well as some lesser-known gems inspired by young people.