It is part of All Classical Portland’s mission to expand and advance knowledge of and appreciation for classical music. If you’re just starting to discover music outside the traditional classical canon, there’s no better composer to start with than that African American 20th-century composer Florence Price, whose music has been enjoying a recent resurgence in concert performances and recordings.

Dr. Samantha Ege of Oxford University is a leading specialist on Florence Price, whose work she has been studying since 2009. Dr. Ege is a researcher, a writer, and a pianist, and equally brilliant in all these areas of expression. In addition to her virtuosic technique and stylistic sensitivity, she brings a musicologist’s scholarly analysis to her interpretations of Florence Price’s piano music.

I met Dr. Ege last November at the 2021 Annual Meeting of the American Musicological Society, where she presented a lecture-recital and appeared as a panelist. As All Classical’s Music Researcher, I recently had the privilege of chatting with her about her her work on Florence Price and the artistic flowering of Black musical life in midcentury Chicago. Read on to learn about Dr. Ege’s career and research, and about her new album Black Renaissance Woman, coming out in March 2022. As a musicologist, I am interested in women’s contributions to the history of classical music. As an undergraduate exchange student at McGill University, I particularly became interested in Florence Price. This was the first time I had encountered a woman of African descent in my music education. I became interested in knowing more about her world. My research looked at how she navigated Jim Crow America as a Black woman.

But in order to better understand her story, I had to play her music. So I did. And I would play her music alongside lectures I gave about her life. I, of course, knew that her music was powerful, but did not anticipate that audiences would not only be enthralled by her music, but by my playing too. And out of that my identity as a concert pianist was born.

I had trained as a classical pianist, but as you can imagine my repertoire revolved around the canon. It wasn’t until I started playing music by women like Florence Price and the Czech composer Vítězslava Kaprálová that I really found my voice as a concert pianist. Researching the worlds of groundbreaking women in classical music as a musicologist essentially helped me find my own place as a Black female concert pianist.

Florence Price (1887-1953) is a groundbreaking American composer. Here at All Classical Portland, we are expanding our broadcast library to feature more of her work, but her music may still feel unfamiliar to many. What specifically drew you to this comparatively neglected composer? How can her music enrich the experience of concert hall and radio audiences? 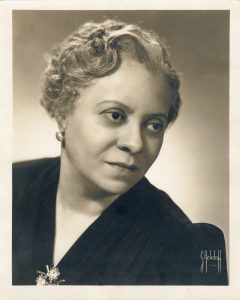 The first piece of music by Florence Price that I ever heard was her Fantasie Nègre No. 1 in E minor. It’s based on a Spiritual called “Sinner Please Don’t Let This Harvest Pass.” Even though I wasn’t familiar with the Spiritual, I could hear the influence of the composers in my repertoire (Brahms, Liszt, Chopin, etc.) but I could also hear the brilliance of a woman with so much more to say.

I loved that she drew upon her diverse cultural heritage and that the African American influences went further back, beyond jazz, beyond the blues, and engaged the folk music of the enslaved. It was such an uplifting celebration of where she had come from and where she was in that current moment. Her music is the story of the United States and it is deeply tragic that some listeners refuse to hear that on account of her gender and race.

I recently had the privilege of performing Price’s small piano suite Thumbnail Sketches of a Day in the Life of a Washerwoman. I was struck by Price’s masterful blend of jazz and Impressionist languages, and the work’s moving portrayal of human dignity. What kinds of themes and interests – both musical and extramusical – should we listen for in Price’s compositions?

Florence Price has an ear for melody. Whether she is directly quoting or subtly evoking Spirituals, or taking you in chromatic directions with dreamy impressionistic writing, the story that she is trying to tell lies in her melody.

You’ve performed and recorded many of Price’s piano works, notably in your album Fantasie Nègre: The Piano Music of Florence Price. Is there a particular work by Price you’d recommend to people who want to start exploring her music?

Because the first piece I ever heard by Price was her Fantasie Nègre No. 1 in E minor, I used that to open the album. I wanted the audience to experience what I had experienced: the wonder of Price’s magnificent soundworld. I think it’s a fantastic introduction to her compositional style.

What resources would you recommend to learn more about Black artists’ contributions to classical music?

Eileen Southern’s The Music of Black Americans: A History remains one of the most important and comprehensive books on African American artistry. Not only will you learn more about Black artists’ contributions to classical music, but you’ll see how their work is situated in the rich tapestry of Black creativity in the United States.

I am looking forward to the release of your forthcoming book South Side Impresarios: Race Women in the Realm of Music (University of Illinois Press, 2023). Can you tell us a bit about the book, and explain the term “Race Women?”

My book focuses on the community of Black female practitioners who operated on Chicago’s South Side in the first half of the twentieth century. This includes Florence Price, but it also includes numerous other women like Margaret Bonds, Nora Holt, and Betty Jackson King (whose music I’ve recorded on my new album Black Renaissance Woman). With this book, I illuminate their unacknowledged activity and ambition and shed new light on concert culture in the era of the Black Chicago Renaissance.

Race women were a particular demographic who were university-educated and many of them were classical trained musicians. I use this term to acknowledge the ways that class, race, and gender interacted in their lives, and led them to pursue the kinds of musical activity that defined their work.

Would you tell us more your upcoming album, Black Renaissance Woman? 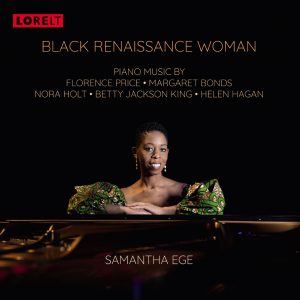 With Black Renaissance Woman, I am excited to bring the voices of Florence Price, Margaret Bonds, Nora Holt, Betty Jackson King and Florence Price together and for listeners to learn more about the incredible Black Renaissance era through their music. The album features the first recording of the sole surviving work by Helen Hagan, a pioneering Black woman who attended Yale in the 1910s, and Margaret Bonds’ Spiritual Suite, which contains one of my favorite piano pieces in the world: “Troubled Water.” This recording project was awarded the American Musicological Society’s prestigious Noah Greenberg Award in recognition of how it uses research and performance to illuminate the rich performance traditions of the Black Renaissance. The album will be available on all platforms on March 1, 2022. I can’t wait for you to hear it!