Maria Malibran and Pauline Viardot were two of the bel canto era’s greatest mezzo sopranos. Sisters, and daughters of the imposing Spanish pedagogue Manuel García, Malibran and Viardot each left an indelible mark on nineteenth-century opera. Each was also a composer, but their ability to compose was less celebrated during their lifetimes. Malibran, who died tragically young in 1836, was widely lauded for her singing, but her compositions were less noted. Viardot, who lived until 1910, survived long enough for the Western music world to become more accustomed to the notion of a woman composer. Both left exquisite compositions that offer insight into nineteenth century bel canto – and offer fascinating listening for any music lover.

In this two-part series, we’ll explore the careers and music of these two remarkable sisters. We begin with the elder, Maria Malibran. In Part II, we’ll meet the younger sister, Pauline Viardot.

A Family of Virtuosi 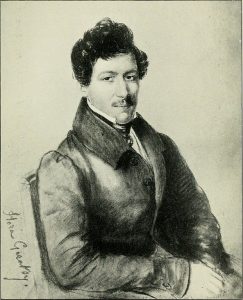 Maria García was born in Paris in 1808 to two Spanish singers: the soprano María Joaquina Sitches (1780-1864) and the tenor Manuel García (1775-1832). Manuel García’s pedigree was particularly intimidating: he created the role of Almaviva in Gioacchino Rossini’s Il barbiere di Siviglia, and composed and directed operas in Paris and the United States. Perhaps most notably, he was a strict vocal teacher who produced remarkable results. His own daughters, Maria and Pauline, would prove to be his most successful students.

Maria, García’s eldest daughter, was a special project for the esteemed pedagogue. Though she appears to have been naturally a contralto or mezzo soprano, Maria’s father insisted on training her voice to reach as high as an E above a soprano’s high C. Several scholars have suggested that García’s vocal training was so harsh that Maria struggled to cope with the pressure. 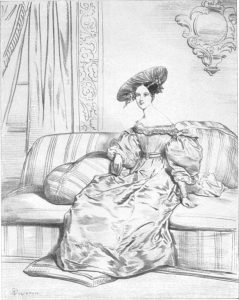 Maria García at sixteen, in 1824. Portrait by Achille Devéria. Courtesy of Wikimedia Commons.

Maria García made her professional debut in 1825 as Rosina in Rossini’s Barbiere di Siviglia. She was seventeen years old. Later that year, Manuel García brought the whole family to New York, where Maria astounded American audiences in roles by Rossini, Mozart, and her father. Opera was rare in America at the time, and Maria García became America’s first opera star.

In 1826, Maria García married Eugène Malibran. It is likely that the eighteen-year-old Maria was motivated by a desire to escape the control of her father. The marriage proved disastrous: Eugène Malibran appears to have misrepresented his financial situation, and though Maria intended to retire from the stage after her marriage, her husband expected her to continue performing in order to pay off his debts. In 1827, Maria Malibran separated from her husband and returned to Paris alone, to recommence her career on her own terms.

“The Foremost Genius of Europe”

Maria Malibran made her Paris debut in Rossini’s Semiramide in January of 1828. The performance was a spectacular success, and rocketed Malibran into a career as one of Europe’s great opera singers. Malibran triumphed in all the great capitals of Europe, and claimed Gioacchino Rossini and Vincenzo Bellini among her friends and artistic admirers. Bellini’s music, in particular, became a specialty: her performances in I Capuletti e I Montecchi, La Somnambula, and Norma were celebrated.

For a taste of Malibran’s vocal virtuosity, listen to this aria she customarily inserted into performances of Donizetti’s L’elisir d’amore. The art of inserting one’s own choice of arias into operatic roles was an expression of artistic agency for nineteenth-century singers; Hilary Porliss explores this fascinating topic in her book Changing the Score: Arias, Prima Donnas, and the Authority of Performance. This particular tour-de-force, “Prendi per me sei libero,” was composed either by Malibran herself, or by the violinist Charles de Beriot, who would become her second husband in 1836.

"Prendi per me sei libero," by Maria Malibran or Charles de Beriot 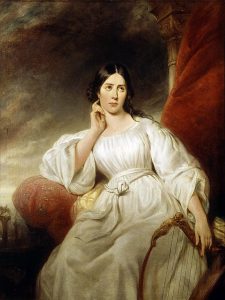 Malibran’s appeal as an artist went beyond her flexible voice and astonishing range: she was also hailed as an excellent actress. The French novelist George Sand saw Malibran in Rossini’s Otello in January 1831, and described her performance in a letter:

“She made me weep, shudder, in a word – suffer, as if I had been witnessing a real-life scene. This woman is the foremost genius of Europe, as beautiful as one of Raphael’s Virgins, simple, vigorous, unaffected, she is the foremost singer and the foremost tragic actress.”

– Quoted in April Fitzlyon, Pauline Viardot: The Price of Genius, 33. 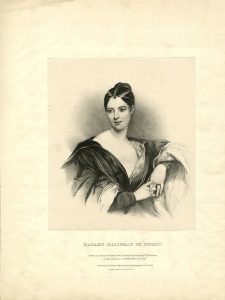 In 1829, Maria Malibran met the violinist Charles de Beriot, who would become her life partner. Malibran struggled for years to obtain an annulment of her first marriage, and it was not until March of 1836 that she and de Beriot were finally able to marry.

Tragically, Maria Malibran would suffer a severe riding accident only a few months later, while pregnant with the couple’s second child. Complications proved fatal, and she died at the age of twenty-eight. The arts community of Europe was deeply affected by the traumatic loss of Maria Malibran, and elegiac reflections on “Maria Malibran de Beriot” appeared immediately, including a biography as early as 1836. 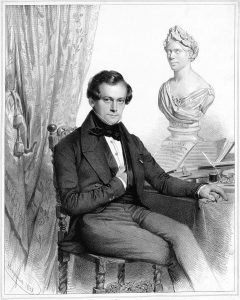 Charles de Beriot (1802-1870) poses with a bust of the late Maria Malibran in 1838. By Charles Baugniet. Courtesy of Wikimedia Commons.

One wonders how the artist would feel about the fact that her surname has been frozen in history as Malibran, rather than her birth name of García, or her chosen married name of de Beriot.

In the midst of a frenetic singing career, Malibran published several songs and duets. Her compositions gained praise from the likes of Rossini. In 1837, Hector Berlioz published a review of Malibran’s posthumous song collection, Dernières pensées musicales de Marie Félicité García de Beriot (Last Musical Thoughts of Maria Felicia García de Beriot). In his review, Berlioz praises the “charming originality” of the songs, and also remarks on the music’s unexpected harmonic progressions and turns of phrase, and the virtuosity needed to perform the works.

“If any other than Madame de Bériot had taken the liberty of writing phrases in this way, one would not have failed to say that the author did not know how to write for the voice. Here, such a reproach would be ridiculous; one might as well say of Paganini or Liszt that they do not know how to compose a part for the violin or the piano.”

In this review, Berlioz goes so far as to use the word “bizarre” to describe Malibran’s melodies. The criticism feels either disingenuous or double-edged, considering the unconventionality of Berlioz’s own melodic writing, for example, the idée fixe theme in his Symphonie fantastique.

Of course, the “bizarre” was not necessarily an artistic detriment in the period which we now call the Romantic era. Berioz’s Symphonie fantastique uses unexpected harmonic shifts and angular melodies to evoke extreme emotions and the supernatural. Malibran does the same in her art song from Dernières pensées, “La visita delle morte.” This chilling dialogue between a mortal and Death calls for all of Malibran’s legendary skill as a dramatic actress, and displays her expressive skill as a crafter of harmonic suspense.

One wonders, had Maria had more time to compose, whether her male contemporaries might have recognized her harmonic exploration as akin to their own avant-garde techniques, rather than dismissing her work as “bizarre.” A full assessment of Maria Malibran’s legacy can encompass not just her beautiful singing, dramatic acting, and more pleasing melodies, but also her professional risk-taking, personal tragedies, and harmonic rule-breaking. The portrait that emerges reveals an intelligent, insightful, complex human being and artist.

Humor, virtuosity, and lyricism are part of the fabric of Malibran's showstopping aria "Rataplan." Here it is sung by Cecilia Bartoli, a champion of Malibran's music. 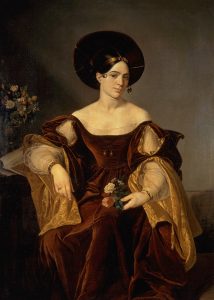 Timeline of Malibran’s life from the Cecilia Bartoli Foundation

Maria Malibran on A Modern Reveal