This piece is dedicated to the unsung champions of classical music: the friends and encouragers who have come together to help the arts thrive. In this list, we’ll meet arts patrons, composers’ roommates, community leaders, aunts, teachers, choir directors, and letter writers. Each, in their own way, gave the support that was needed for music to flourish. 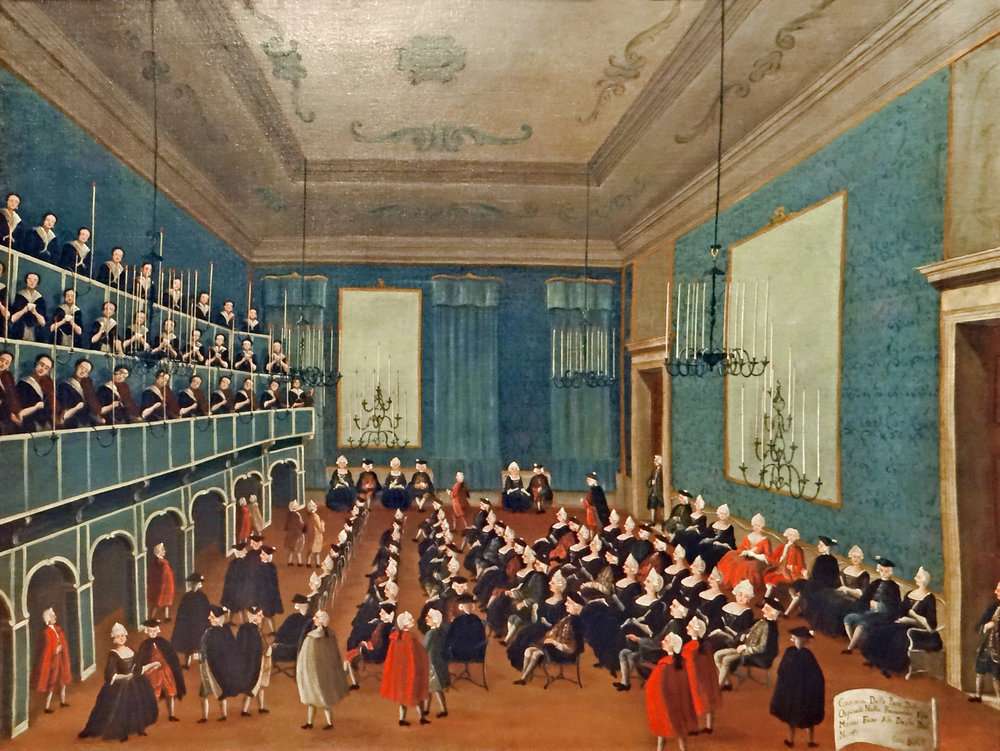 In 14th-century Venice, a group of nuns, the Consorelle di Santa Maria dell’Umiltà, founded a series of orphanages in former pilgrim hostels, or ospedale. In these ospedale, a parent in distress could safely leave an infant in a small entrance called a scaffeta, and the child would be cared for and taught marketable skills.

By the 17th century, the Venetian ospedale had achieved fame for their finest educational achievement: training young girls in music. Particularly famous was the Pio ospedale della pietà, where students were tested for musical aptitude, and those that showed promise received a first-rate musical education.

These students, called the figlie del coro (Daughters of the Choir) studied instruments and voice, and formed an all-women orchestra and choir. The Pietà boasted excellent music faculty, most famously violin teacher, orchestral conductor and composer Antonio Vivaldi (1678-1741). Vivaldi composed many of his works for performance at the Pietà. The concerts and liturgical music at the Venetian Ospedale, especially the Pietà, attracted audiences from throughout Europe, and their performances were immortalized in paintings, such as the one above by Gabriele Bella (1730–1799), and the one below by Francesco Guardi.

A concert by the women of the Venetian Ospedale, in a 1782 painting by Francesco Guardi

French scholar Charles de Brosses heard performances at the Pietà in 1739, and wrote,

“A transcending music here is that of the hospitals. There are four of them, made up of illegitimate or orphaned girls. They are trained solely to excel in music. And so they sing like angels and play the violin, the flute, the organ, the ‘cello, and the bassoon; no instrument frightens them. …each concert is given by about forty girls. I swear to you that nothing is so charming as to see a young and pretty nun in her white robe, with a bouquet of pomegranate flowers over her ear, leading the orchestra with all the grace and precision imaginable.”

The Pietà produced a number of notable musicians, including the composers Anna Bon and Santa della Pietà. Perhaps most respected was the violin virtuosa who took the names Anna Maria del Violin or Anna Maria della Pietà (c.1696 – 1782). Anna Maria was a student of Vivaldi, and many of his concertos were likely written for her. She spent her entire career at the Pietà, where she was promoted to maestra, directing the ensembles and teaching violin. She is praised in numerous contemporary accounts: Baron Karl Ludwig von Pöllnitz heard her in Venice and described her as Italy’s finest violinist. 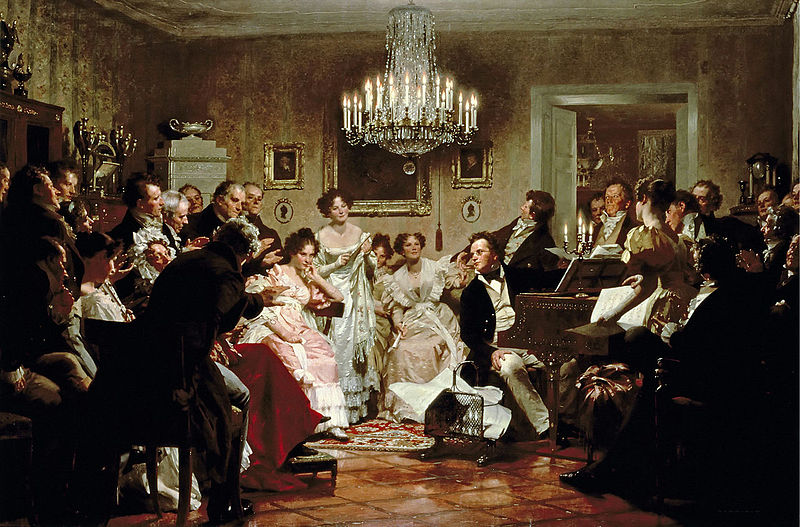 Franz Schubert (1797-1828) struggled throughout his life to earn a living in music. Publishers and concert impresarios were infrequently interested in his work. Instead, his music reached Viennese listeners through the hospitality and support of his network of friends.

Josef von Spaun was studying law at Vienna’s Imperial Seminary when the young scholarship student Franz Schubert enrolled. Spaun befriended the younger boy, supplying him with paper for his compositional experiments. After their schooldays, Spaun introduced Schubert to artistic Viennese friends, like Franz von Schober, a happy-go-lucky minor poet and actor. Schober helped Schubert find lodging through his family connections, and was occasionally Schubert’s room-mate. Schober also wrote the lyrics to An die Musik, Schubert’s heartfelt song about the transformative power of music.

Schober and Spaun introduced Schubert to Johann Vogl, a baritone whom Schubert had long admired. Vogl became another close friend of Schubert’s, and the foremost interpreter of his songs. Spaun and other friends, like the jurist Ignaz von Sonnleithner, hosted musical salons centered around Schubert’s music, which they dubbed “Schubertiades.” Many of Schubert’s songs were premiered at these gatherings, with Vogl singing and Schubert accompanying at the piano. 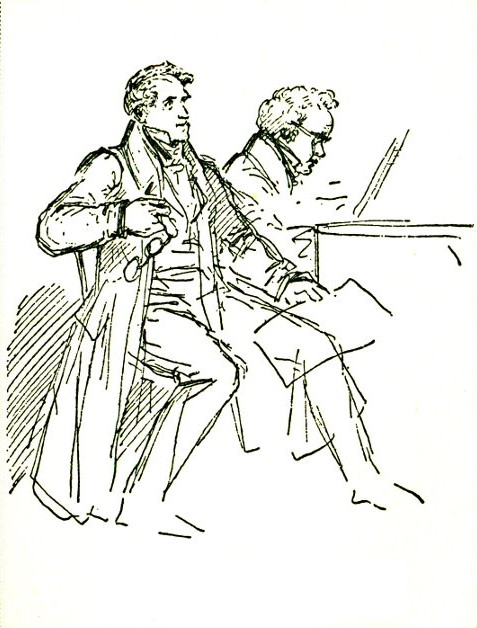 A drawing of Johann Vogl and Franz Schubert at a Schubertiade, by Moritz von Schwind

The artist Moritz von Schwind was another member of this circle of friends. He immortalized a Schubertiade in the group portrait below. Schubert sits at the piano in the center, and at his right is the taller Vogl, who is singing. Mustachioed Schwind himself stands behind Vogl on the left, along with several painter friends. Spaun, the host, sits at Schubert’s left. 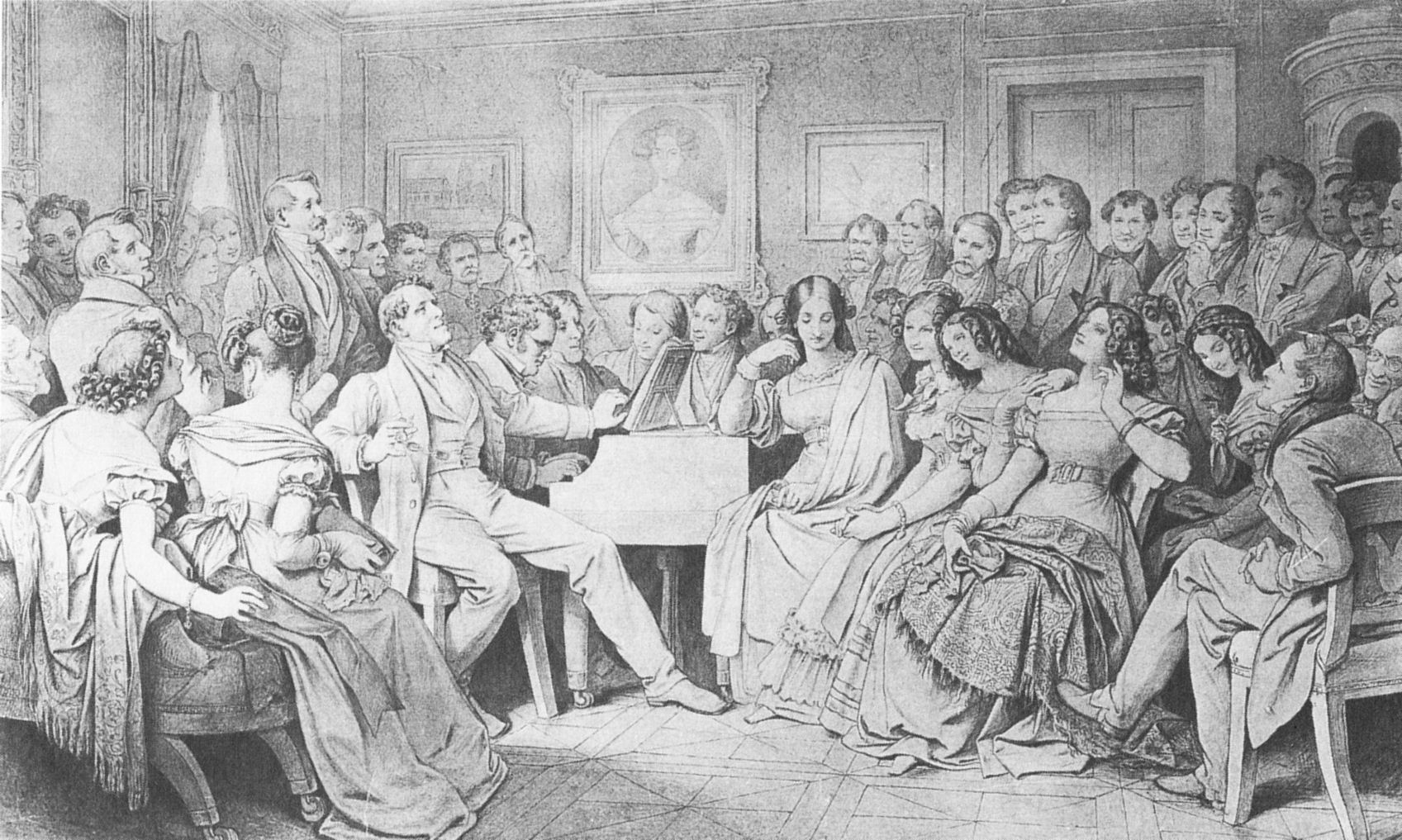 Later in life, Spaun remembered this circle of friends, united around Schubert and his music:

“All became friends and brothers together. It was a beautiful, unforgettable time.” 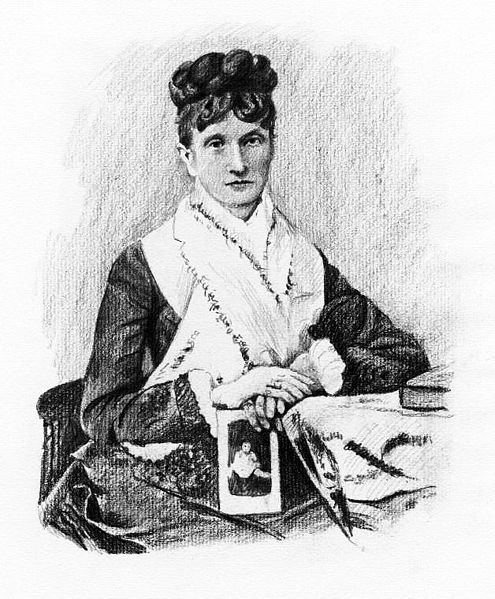 One of music’s most eccentric champions was Russian arts patron Nadezhda von Meck (1831-1894). The widow of a wealthy railway magnate, von Meck took over her late husband’s business while raising her children and establishing herself as a patron of the arts. She took a particular interest in encouraging young Russian musicians: she supported the Russian Musical Society, an organization founded in 1859 by Anton Rubinstein to offer world-class training to Russian musicians.

Nadezhda von Meck was an intensely private person. Despite her love of music, she rarely attended concerts. Instead, she employed first-class musicians to perform in her home. She hired a then young and unknown Claude Debussy to play duets with her and to teach piano to her daughters. She also assembled a home chamber ensemble of students from the fledgling Moscow Conservatory, including violinist Iosif Kotek, who in 1876 introduced von Meck to the compositions of his professor, Pyotr Ilyich Tchaikovsky.

Thus began one of the oddest, yet closest, patron and artist relationships in classical music. Von Meck was deeply impressed by Tchaikovsky’s music, and offered him a monthly allowance so generous he was able to resign from his professorship at the Moscow Conservatory and devote himself to composition.

Despite her admiration, von Meck insisted that she and Tchaikovsky never meet in person. Nobody is quite sure why: it might be related to her well-known love of privacy. Instead, von Meck and Tchaikovsky developed a close relationship via correspondence, exchanging hundreds of letters over a period of almost fourteen years, until 1890, when she suddenly (and mysteriously) broke off the relationship.

Tchaikovsky dedicated several compositions to Nadezhda von Meck, while always respecting her privacy. In 1878, von Meck offered Tchaikovsky the use of her country home for a vacation (while she was away, of course). During this visit, Tchaikovsky composed Memories of a Dear Place, Op. 42, which he dedicated to “B.” – the initial of von Meck’s estate, Brailivo. Tchaikovsky also dedicated his monumental Fourth Symphony to Nadezhda von Meck: the dedication reads, simply, “To my best friend.” 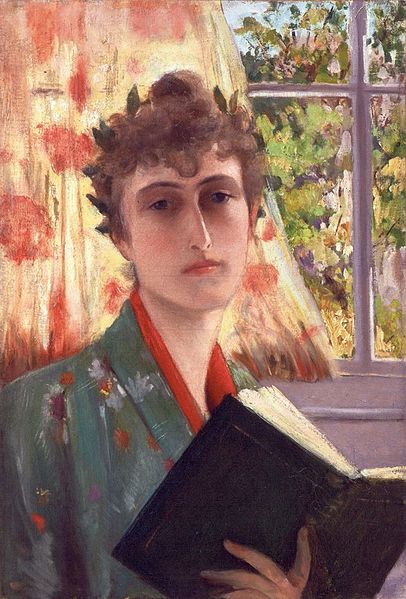 Winnaretta Singer (1865-1943) was one of the early 20th century’s great musical patrons. Born in Yonkers, New York, she was an heir of the Singer sewing machine fortune. Her family moved to Paris when she was ten, where she met Gabriel Fauré and studied painting (she painted the above self-portrait around 1885). Singer also played the piano and the organ.

In 1893, Singer became the Princesse de Polignac when she married amateur composer Prince Edmond de Polignac. It was a marriage of friendship and convenience, as both partners were openly gay. (Among the Princesse’s many lovers was English composer Ethel Smyth.)

Singer-Polignac embarked on humanitarian projects, commissioning the building of low-income housing in Paris with architect Le Corbusier, and working with Marie Curie to convert limousines for mobile radiology care during the First World War. She also turned the Polignac homes in Paris and in Venice into centers for artistic discussion, where her guests included Marcel Proust, Colette, Jean Cocteau, Sergei Diaghilev and Claude Monet. 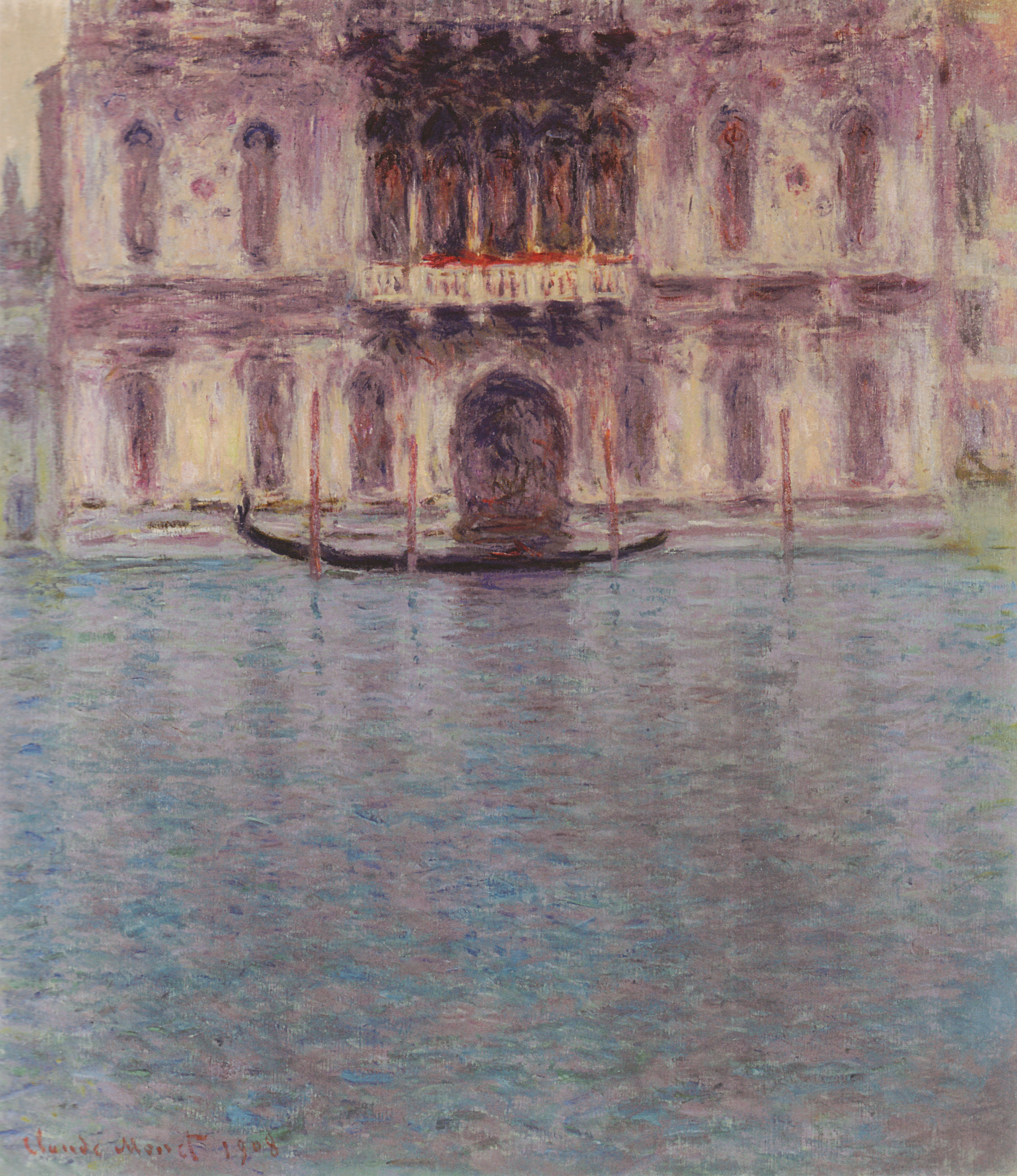 The Palazzo Continari, the Polignacs’ Venice residence, in a painting by Claude Monet (1908)

Singer-Polignac’s greatest passion was music. She hosted soirées which saw the premieres of pieces by Vincent D’Indy, Gabriel Fauré, Claude Debussy, and many others. She also commissioned new works from young avant-garde composers, including Manuel de Falla, Erik Satie, Francis Poulenc, and Igor Stravinsky. One of the many works we owe to her influence is Maurice Ravel’s Pavane pour une infante défunte, which he dedicated to her.

Singer-Polignac ensured that her mission to support the arts would outlive her by founding the Fondation-Singer-Polignac in 1928. To this day, the Foundation continues to offer concerts in the Polignacs’ Paris music room. 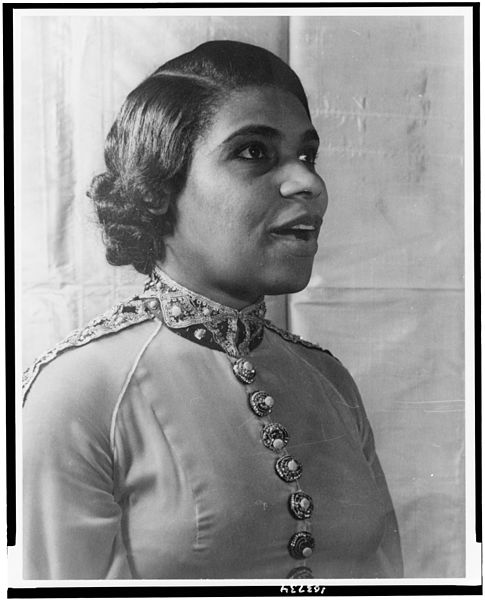 The childhood of American contralto Marian Anderson (1897-1993) is a story of many caring people coming together to support a talented child.

Anderson grew up in South Philadelphia. Her father sold ice and coal at the Reading Terminal. Her mother had been a teacher in Virginia, but the limited options for Black teachers in Philadelphia led her to choose a career in childcare instead. The couple could not afford private musical training for their talented daughter Marian: instead, at the advice of her Aunt Mary Pritchard, six-year-old Marian Anderson joined the youth choir of her family’s church, Union Baptist Church in South Philadelphia.

Anderson’s choir director, Alexander Robinson, was one of the leading Black choir directors in Philadelphia, and later in life, Anderson looked back with gratitude on the time and energy he spent with the choirs. She was grateful for a director who,

“Out of sheer love for the church and a spirit of service, gave his time freely to help others. It gave him pleasure to work with those young voices, and since he loved music and understood enough to communicate his feelings with us, he was able to do something with us.”

Marian Anderson’s Aunt Mary continued to tirelessly support her, taking her to concerts and finding her opportunities to sing. Marian caught the attention of Emma Azalia Hackley, another leading African-American conductor. Hackley was the founder and director of the People’s Chorus, which was made of up of singers from the choirs of Philadelphia’s Black churches. Marian Anderson was invited to join as one of the Chorus’s youngest singers. When Hackley assigned Anderson a solo, she arranged for the child to stand on a chair on stage, explaining, “I want her to feel elevated.” 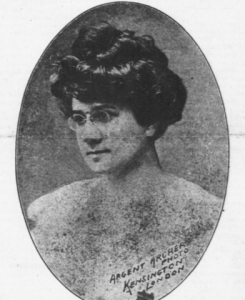 When Marian Anderson was twelve, her father suffered a head injury at work, and after weeks of illness, he succumbed to heart failure. The family struggled financially after this loss, and Marian could not afford to attend high school after she graduated from grammar school in 1912. The Rev. Wesley Parks, pastor of Union Baptist Church, and the leaders of the Peoples’ Chorus banded together to create the “Marian Anderson’s Future Fund.” Through the support of her community, Anderson was able to receive private voice lessons and attend South Philadelphia High School for Girls.

It was Marian Anderson’s high school principal, Dr. Lucy Langdon Wilson, who introduced her to her teacher and mentor, tenor Giuseppe Boghetti. Boghetti trained Anderson privately when the Philadelphia Music Academy refused her admission on the grounds of race. When Anderson was seventeen, Boghetti helped her enter a competition that awarded her a solo appearance with the New York Philharmonic, and when she won, her career as one of the world’s great contraltos was launched.