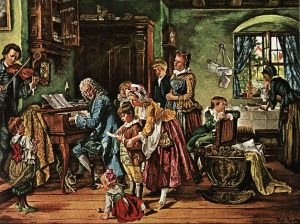 Some of classical music’s most charming repertoire has been music for, or about, children. Some classics, like Schumann’s Kinderszenen and Prokofiev’s Peter and the Wolf, are familiar favorites with audiences of all ages. In this list, we’ll explore a few familiar children’s pieces, as well as some lesser-known gems inspired by young people.

Johann Sebastian Bach (1685-1750) was surrounded by children for most of his life. In addition to fathering more than twenty (!) kids, he also taught choirboys at the St. Thomas School in Leipzig from 1723 to the end of his life. We know he cared about education because he composed beautiful, rewarding music for students, including the 48 preludes and fugues of his Wohltemperirte Clavier (The Well-Tempered Clavier).

On the work’s title page, Bach wrote that the Well-Tempered Clavier is for young people, but also for grownups who need a bit of fun: the collection was “for the use and improvement of musical youth eager to learn, and for the particular delight of those already skilled in this discipline.”

Among the countless “musical youth” to benefit from Bach’s Well-Tempered Clavier were precocious musical siblings Fanny and Felix Mendelssohn. Fanny Mendelssohn (1805-1847), the elder of the two, was able to perform all 48 preludes and fugues from memory at the age of 12. Her brother Felix (1809-1847) went on to compose his own music inspired by children.

In 1842 Felix visited London and stayed with his wife’s relatives, the Benecke family. The Beneckes had seven children, with whom Felix enjoyed frolicking in the family garden. One day Felix found himself babysitting the children while he was trying to work on some of his Lieder ohne Worte (Songs without Words). The little ones wanted his attention and kept playfully yanking his hands off the keyboard, a tease which reportedly inspired the frequent clipped-off notes in the piece he was writing: the Frühlingslied (Spring Song), Op.62 no.6.

The Venezuelan piano virtuoso Teresa Carreño (1853-1917) was a remarkably versatile artist. Any internationally successful pianist, conductor, composer, and opera singer is a force to be reckoned with, let alone Carreño, who accomplished all these things as a woman in the nineteenth century. She even spent a couple years forming and directing an opera company in Venezuela. Carreño achieved particular acclaim in Germany, and she acquired a very German-Romantic musical moniker: the “Valkyrie of the Piano.”

Carreño’s recitals featured virtuosic compositions by herself, and by contemporary American composers (a rare choice on the international scene at the time). However, she often chose to end her performances with a tender encore: a little waltz that she entitled Mi Teresita (My Teresita). She composed this sweet piece for her daughter Teresita, whom you might remember from our recent post about “Composers at Home.”

Amy Marcy Beach (1867-1944) was one of the first American women to achieve international recognition as a composer. She was a virtuoso pianist who debuted with the Boston Symphony Orchestra at the age of eighteen, and her Gaelic Symphony (1896) was the first internationally acclaimed symphony by an American woman.

In addition to her large-scale compositions, Beach composed a number of delightful works for children, including music for children’s chorus and suites for children studying the piano. Her Children’s Carnival, Op.25, was published in 1894, and it includes this charming movement entitled “Columbine.”

In 1905, Claude Debussy (1862-1918) and Emma Bardac had a daughter, whom they named Claude-Emma (Chouchou for short). Debussy was overjoyed to be a father: at Chouchou’s birth, he wrote to his friend Louis Laloy, “This joy has quite bowled me over and still bewilders me!”

Debussy composed his Children’s Corner, a suite for piano, between 1906 and 1908, while Chouchou was a toddler. He dedicated work to her: “To my beloved little Chouchou, with tender excuses from her father for what follows.” The set offers musical pictures of Chouchou’s playtime and toys, including a lullaby for her lumbering little velvet elephant Jumbo – whose name Debussy, possibly as a joke, misspelled as “Jimbo.”

Chicagoan John Alden Carpenter (1876-1951) was another composer inspired by the antics of a baby daughter. He and his daughter Ginny were “inseparable,” according to Ginny’s governess, who wrote of the composer and his little daughter playing games and taking walks together. Carpenter’s orchestral suite Adventures in a Perambulator (1914) comes with copious program notes from the point of view of the heroine of the piece: a baby. In the fifth movement, “Dogs,” the Baby is overjoyed to encounter raucously barking pups during her perambulator ride:

“…It is Dogs! We come upon them without warning. Not one of them—all of them. First, one by one; then in pairs; then in societies. Little dogs, with sisters; big dogs, with aged parents. Kind dogs, brigand dogs, sad dogs and gay. They laugh, they fight, they flirt, they run. And at last, in order to hold my interest, the very littlest brigand starts a game of ‘Follow the Leader,’ followed by the others. It is tremendous!”

Florence Price: "To My Little Son"

One of Price’s particularly poignant works is her art song “To My Little Son,” a setting for voice and piano of a poem my Julia Johnson Davis. Inspired by the birth of her first child, Tommy, this tender piece encapsulates the voice of a mother dreaming of her child’s future. However, the song’s context gives it a devastating power: Tommy passed away in infancy, and Price dedicated the song to his memory.

Cuban composer Ernesto Lecuona (1896-1963) was a conservatory-trained piano prodigy and a friend of Maurice Ravel and George Gershwin. In fact, he was sometimes called the “Gershwin of Cuba,” because like his friend, he moved effortlessly between the classical and popular styles of his day. Lecuona composed Hollywood films scores, popular songs, and concert music; he also helped found both the Lecuona Cuban Boys Band and the Havana Symphony Orchestra.

Lecuona’s Estampas infantiles (Diary of a Child) is a suite of character pieces for piano, published in 1956. In the tradition of Schumann’s Scenes from Childhood, this little suite is suited to both the technique and the imagination of young pianists. The child’s five-movement “diary” opens with a “Good Morning” (Buenos días) and progresses through playtime to evening with a song of the moon (Canción de luna), followed by an (apparently rather wild) after-hours dolls’ party (Bacanal de muñecos).

Commissioned by the Young People’s Chorus of New York City, Jessie Montgomery’s Danse africaine (2015) is an exuberant work that taps into the freedom and energy of children’s voices. The commission was part of the Chorus’s Transient Glory commission series, which is intended “to encourage today’s most respected composers to consider the children’s chorus as a serious and glorious instrument capable of making music of the highest quality during the fleeting period of time when their voices are imbued with a particular poignancy and innocence.”

Jessie Montgomery (b. 1981) is an award-winning violinist and composer who has received commissions from the Metropolitan Museum of Art, the Orpheus Chamber Orchestra, and many other arts organizations. Her Danse africaine sets text from Langston Hughes’ 1922 poem of the same name, beautifully translating the poem’s complex rhythm into music.

For more music for children, tune in to ICAN, our International Children’s Arts Network! You can listen at KQAC HD-2 in Portland, 89.9, or stream anywhere in the world at icanradio.org.