Many people are at home right now – working from home, studying at home, isolating at home. Have you wondered what self-isolation would have looked like for classical composers? Let’s explore some historical images and meet some Composers at Home.

You might remember Flemish composer Leonora Duarte (1610-c.1678) from our recent blog post on early women composers. Scholars suggest this 1653 painting by Gonzales Coques portrays the Duarte family, most of whom sang, composed, or played instruments. Leonora is probably the lady in the center holding a guitar. For our purposes, I suppose the monastic gentleman was visiting when the stay-at-home order was made, so now he gets to quarantine in the beautiful Duarte home. 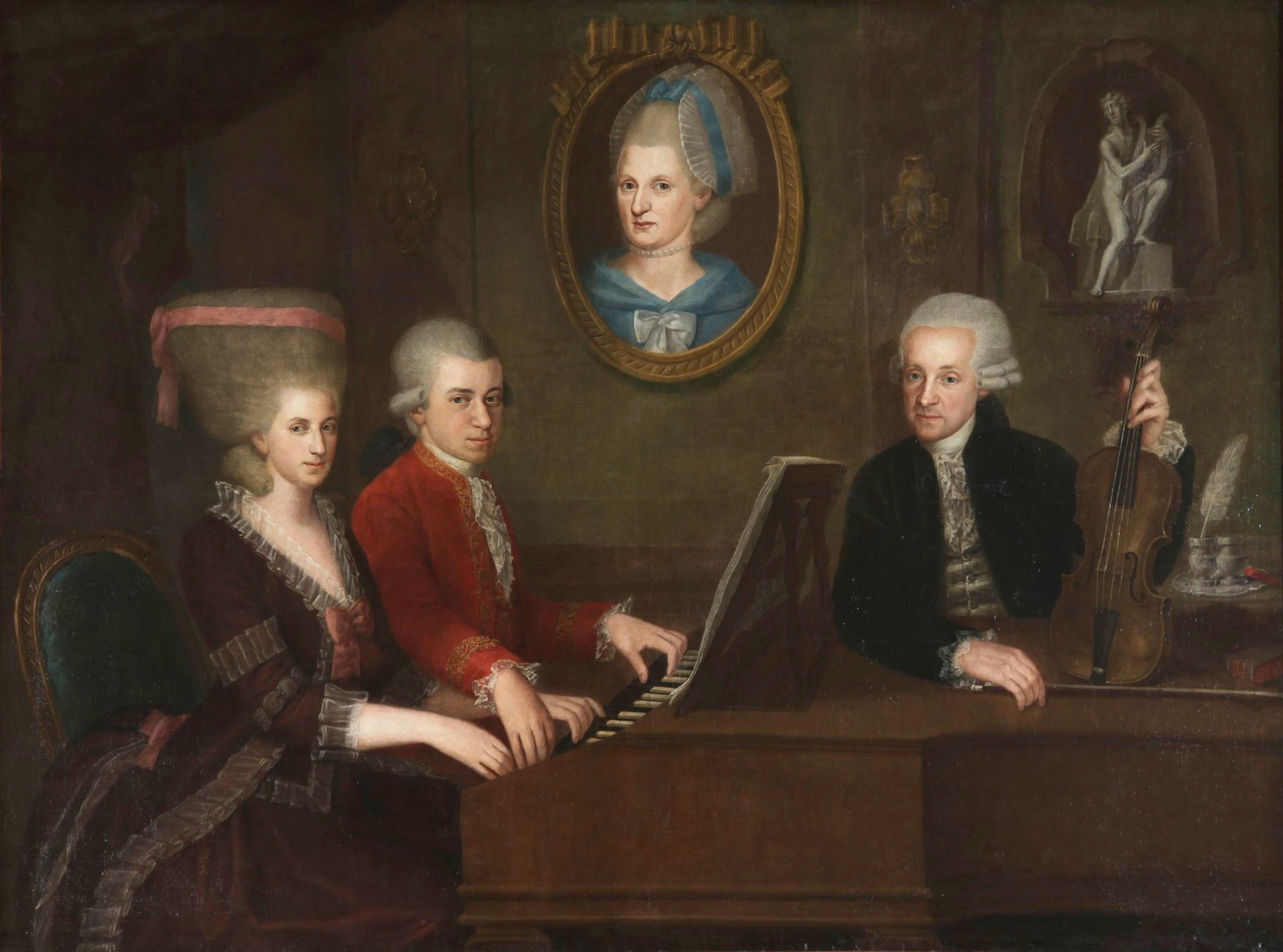 Johann Neopmuk della Croce painted this portrait of the Mozart family around 1780. Wolfgang Amadeus (1756-1791) is seated at the keyboard playing a duet with his sister Anna Maria (Nannerl for short) (1751-1829), and their father Leopold (1719-1787) is leaning on the instrument with his violin. Touchingly, a portrait of Wolfgang and Nannerl’s mother, Anna Maria Walpurga Mozart, hangs on the wall. She passed away in 1778, and she’s clearly close to her family’s heart. 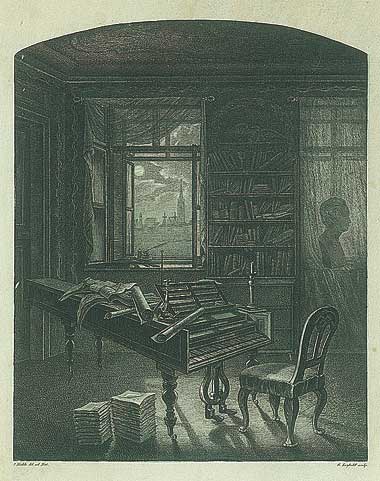 This engraving of Beethoven’s last apartment, in the Schwarzpanierhaus in Vienna, is based on a painting by Johann Nepomuk Höchle (1790-1835). If you’re wondering about the mess on top of the piano, that’s not because Ludwig van Beethoven (1770-1827) was stressed about a worldwide pandemic. That’s just how he lived.

The Music Room of Fanny Hensel, née Mendelssohn Bartholdy, in Her Home at Leipziger Str. 3, Berlin, by Julius Helfft (1849) 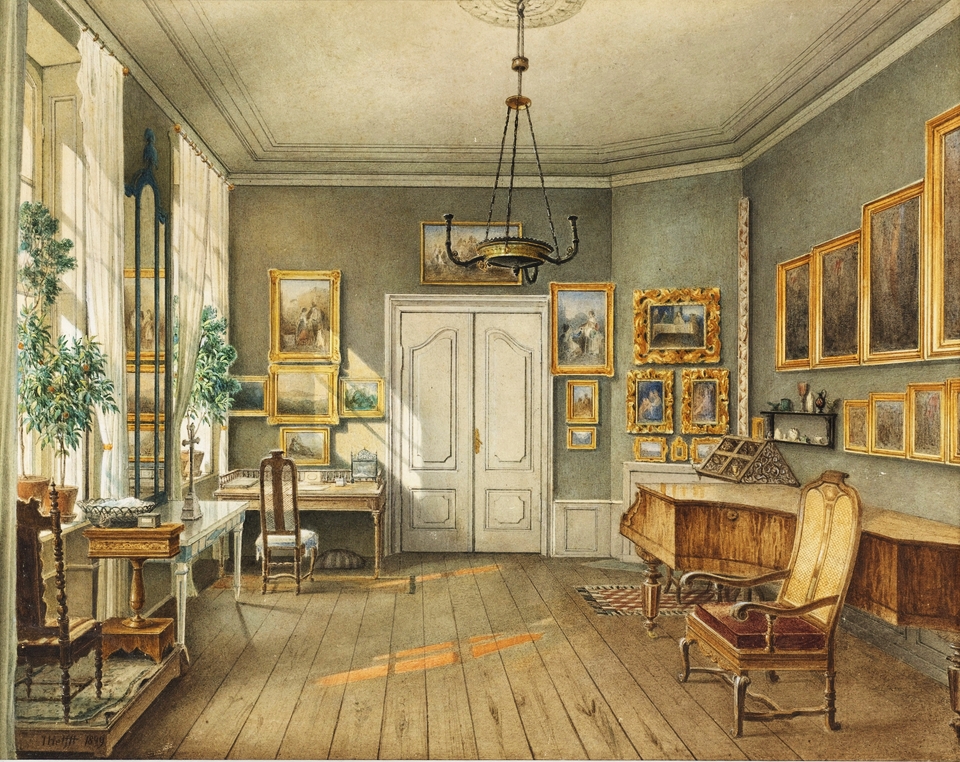 Fanny Mendelssohn Hensel (1805-1847) was used to working from home – a 19th-century woman of her class rarely had the opportunity to work anywhere else. But that didn’t stop her from composing, or performing as a conductor and pianist at the musical salons she hosted. Her beautiful music room would have been a lovely backdrop for a livestream solo recital.

Verdi at Sant’Agata, photographed in 1878 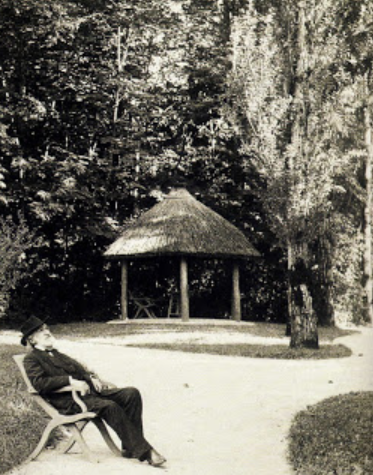 In this photo, Giuseppe Verdi (1813-1901) is relaxing in the garden of his country house in Sant’Agata, where he lived from 1848 to the end of his life. Verdi was not fond of crowds and city life, so Villa Verdi was a very private house, far from the city, surrounded by trees to block out the world. Verdi would probably have loved self-isolating there.

Carl Müller painted this image of the music room of Johannes Brahms (1833-1897) in 1906, shortly after the composer’s death. Brahms lived in this Viennese apartment during the last decade of his life. Considering how intimidated he had been to write his first symphony under the deep shadow of Beethoven, I’m surprised he wanted to practice with that bust of Beethoven staring at him from the wall.

Edvard Grieg (1843-1907) and his wife Nina had a lovely summer home near Bergen, Norway, called Troldhaugen. The name, chosen by Nina, means “troll hill.” She selected this name because the neighborhood children called a nearby valley “Troll Valley.” Edvard Grieg had a little composing hut on the grounds, and I expect he would have spent many happy hours working there during a quarantine. 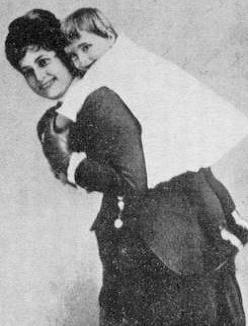 Venezuelan pianist, composer, conductor, and soprano Teresa Carreño (1853-1917) took the world by storm when she made her concert debut at the age of 8, and she continued to astound during her 54-year concert career. I expect a stay-at-home order would have been a professional frustration, as it is to many artists today, but she might have enjoyed the extra time to practice, compose, and play with her adorable daughter Teresita. 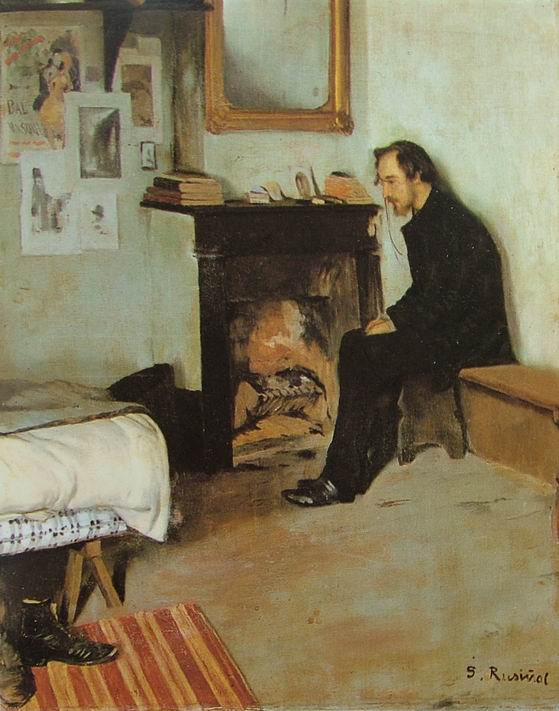 Late in his life, Erik Satie (1866-1925) famously never invited anybody into his apartment. When his friends entered it after his death, they were surprised to find a collection of over 100 umbrellas. But thirty years earlier, in 1891, the young Satie did let artist Santiago Rusiñol into his apartment at 6 Rue Cortot in Paris to paint this somewhat depressing scene. Satie probably looked at the finished painting and thought, “needs more umbrellas.”

Sergei Rachmaninoff with his daughter Irina at Ivanovka, photographed in 1903 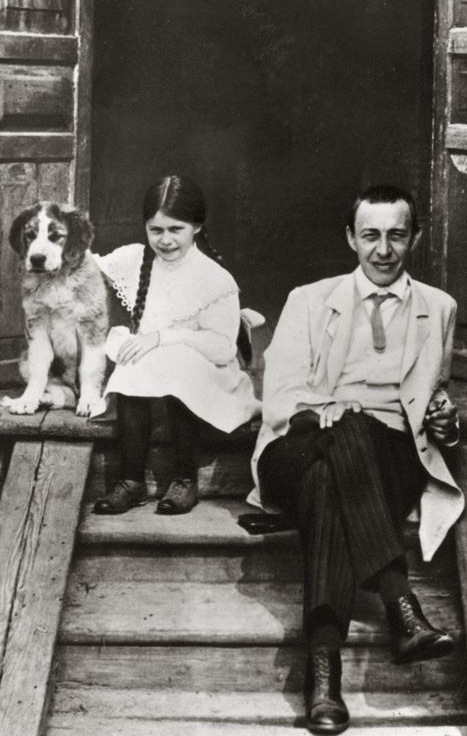 This photograph of Sergei Rachmaninoff (1873-1943) was taken in 1913 at his family’s summer estate, Ivanovka. He’s sitting with his daughter Irina and their dog. Like many of us right now, I think he enjoyed getting to spend time with family and pets, because this is one of the rare photos in which Rachmaninoff is not frowning. He might even be trying to smile. 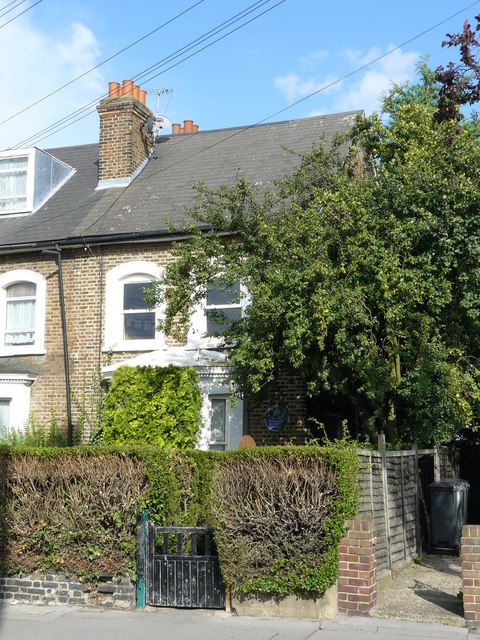 This house in Dagnall Park, South Norwood, London, was home to English composer Samuel Coleridge-Taylor (1875-1912). He and his wife Jessie Fleetwood Walmisley moved in shortly after their marriage in 1899, and in 1900, they welcomed their first child there, Hiawatha (one of Coleridge-Taylor’s most celebrated compositions is his Longfellow-inspired Hiawatha’s Wedding Feast). I can imagine the young family enjoying that front yard while still staying six feet away from passersby.

George Gershwin at the Piano by William Auerbach-Levy (1926)

In 1926, two years after the premiere of Rhapsody in Blue, Belarusian-American artist William Auerbach-Levy painted this portrait of George Gershwin (1898-1937) playing the piano in a bathrobe. I suspect a lot of musicians are playing their pianos in bathrobes during our current increase of home time. I know I am.

Elinor Remick Warren and her Son Wayne, photographed c. 1940
Image from The Library of Congress 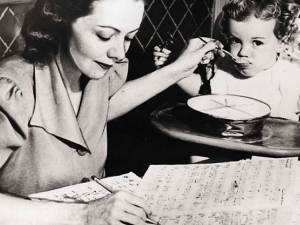 This photo of American neo-romantic composer Elinor Remick Warren (1890-1991) was taken in 1940. As you can see, she is busy composing while also feeding her baby son Wayne. This impressive level of multitasking will be familiar to all moms, especially during the age of social distancing. 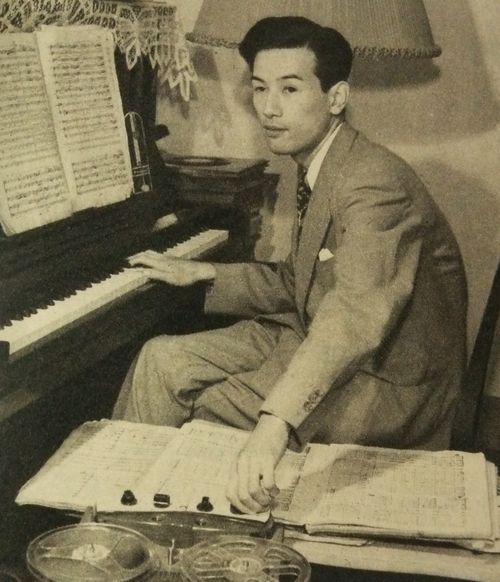 This photo, taken in October of 1952, shows Japanese film and classical composer Yasushi Akutagawa (1925-1989) ready to work from home in his cozy and well-equipped piano corner. Perhaps he’s working on his Triptyque for String Orchestra, which was completed in 1953.

Candid Portrait of Alice Parker, photographed by Eduardo Montes-Bradley in 2019

Composer, arranger and conductor Alice Parker (b. 1925) is a legend of American choral music. Eduardo Montes-Bradley took this photo of at her home in Hawley, Massachusetts in October of 2019. Judging from this serene image, she’s ready to ride out the virus with a lovely view and a glass of wine.