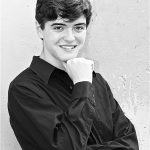 On Deck with Isaac Chapelle

Isaac Chapelle is a 17-year old senior at Sam Barlow High School, where he participates in two choirs and was also recently cast in the role of Sky Masterson in the school’s production of “Guys and Dolls.”  As if that weren’t enough, Isaac sings with three groups within the Pacific Youth Choir.

In this episode of “On Deck” we’ll learn why music is so important to Isaac, and learn about some of his most memorable performances.