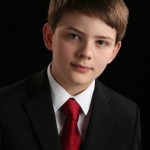 In April of 2014, when he was just 12 years old, violinist Nicholas Dill won a spot in the Jewish Community Orchestra’s Concerto Concert. We’ll hear that performance –the first movement from Kabalevsky’s Violin Concerto— in this episode of On Deck.

Shortly after that big concert, however, in June, Nicholas broke his wrist and, while he heals, has been unable to play. We’ll talk about what it’s like to go from practicing 4 hours a day to not being able to pick up the violin at all.