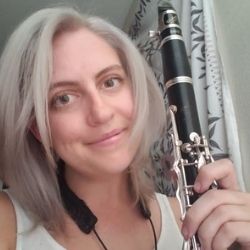 I am a transplant to the Pacific Northwest from Cincinnati, Ohio and discovering All Classical Portland when I first moved here was like being welcomed home. I have a Bachelor’s in Music Performance and a Bachelor’s in Accounting from Louisiana State University. I am currently pursuing my MBA with a dual concentration of Arts Administration and Data Analytics with Southern Oregon University, and I am also working on my CPA license. My immersion into the world of classical music began in the womb as my mother was the second oboist for the Northern Kentucky Symphony (now renamed the Kentucky Symphony). She played well through her pregnancy with me and into my early years of life – I have faint memories of sitting in the front row of her rehearsals with the orchestra and with her woodwind quintet, completely enraptured with all the colors in the air around me. I have been searching for an opportunity like this internship with All Classical Portland since I graduated college. I have a solid amount of for-profit accounting experience at this point, but ultimately, I want to use those skills within my own musical community. I see this internship as an opportunity learn how to use my mixed toolbox of skills to help grow and manage an arts organization while fostering joy for classical music across the world.

The Magic of Radio: Behind the Scenes with Chief Engineer Mike Alston

National Radio Day crackles to life on August 20th every year in the United States for us to celebrate the miracle of sound waves travelling to our ears from far and wide. The history of National Radio Day is about as fuzzy as an untuned radio though, with rumors of its beginnings lying somewhere in… More

LGBTQ+ pride in Oregon has a long history, dating back to 1975 when 200 people gathered in the South Park Blocks near Portland State University for what would be Oregon’s first Pride celebration. The creation of space for LGBTQ+ individuals has gone through countless evolutions both in Oregon and worldwide. In this article, we’re featuring… More

Juneteenth is the commemoration of the ending of slavery in the United States. On June 19th, 1865, Union soldiers, lead by Major General Gordon Granger, arrived in Galveston, Texas with news that the war had ended and every single enslaved person was now free. The date of this deeply overdue insurgence is an important one… More

Pride is celebrated in June every year to memorialize the Stonewall Riots of 1969 and celebrate the lives of LGBTQ+ individuals all over the world. On the night of June 28th, 1969, the police raided the Stonewall Inn and this became one of the main powder kegs of change for the LGBTQ+ community. Stormé DeLarverie,… More