LGBTQI+ pride in Oregon has a long history, dating back to 1975 when 200 people gathered in the South Park Blocks near Portland State University for what would be Oregon’s first Pride celebration. The creation of space for LGBTQI+ individuals has gone through countless evolutions both in Oregon and worldwide. In this article, we’re featuring nine different LGBTQI+ classical musical spaces right here in Oregon. Many of these groups are even non-audition and open to anyone who has a musical story to tell, so if you’ve been searching for a welcoming space to grow your musical talents, read on!

* This blog was originally published in June 2020. Some of the organizations mentioned may not be currently performing. 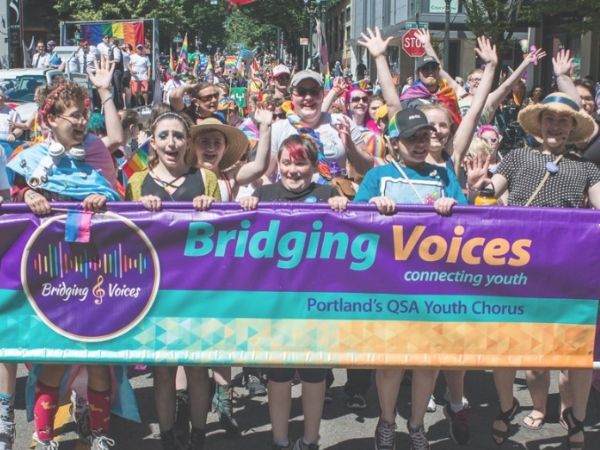 Bridging Voices is a youth chorus for LGBTQ+ and allied youth ages 13 to 21 that was founded in 2013. Bridging Voices strives to “break down the foundations of homophobia and transphobia through visibility. Within these walls, the things that make us different are celebrated and encouraged, not hidden or criticized”. They are a non-audition chorus and are Portland’s first Queer/Straight Alliance Youth Chorus. The chorus holds a spring and a holiday performance each year with themes including youth activism, individual identity, love, loss, creating community, and social justice. 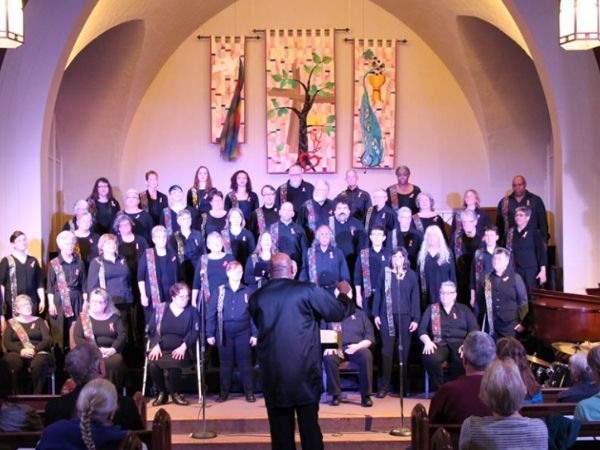 Confluence is a Willamette Valley LGBT Chorus, founded in 2000, that strives to “celebrate and affirm the lives of gay, lesbian, bisexual, and transgender individuals”. They hold themed spring, fall, and winter concerts each year and are a non-auditioned chorus. Confluence aspires to perform the highest quality choral music without “being too stuffy”! 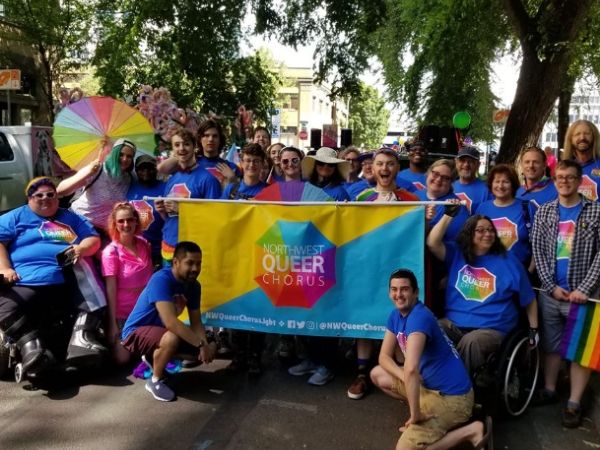 * The Northwest Queer Chorus was featured when this blog was originally published in June 2020. 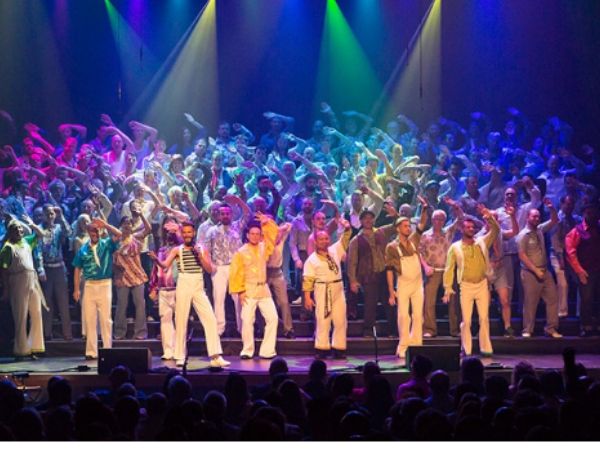 The Portland Gay Men’s Chorus was founded in 1980 and “aspires to expand, redefine, and perfect the choral art through eclectic performances that honor and uplift our community and affirm the worth of all people”. Shortly after PGMC’s founding, the gay community was faced with the AIDS crisis. The Portland Gay Men’s Chorus became an emotional and spiritual haven for the community, and performed for funerals of many of its members, friends, and family. At the height of the crisis, the membership in the Chorus was less than 30 members. Currently, the Portland Gay Men’s Chorus comprises over 125 singers, and packs venues in Portland and beyond. In August 2018 PGMC became the first Western gay performing group to tour and perform in China. They were also awarded the Portland State University College of Urban and Public Affairs “Urban Pioneer Award,” for affirming “the worth of the LGBT community, while changing the hearts and minds of all those who have listened to their affirming songs”. 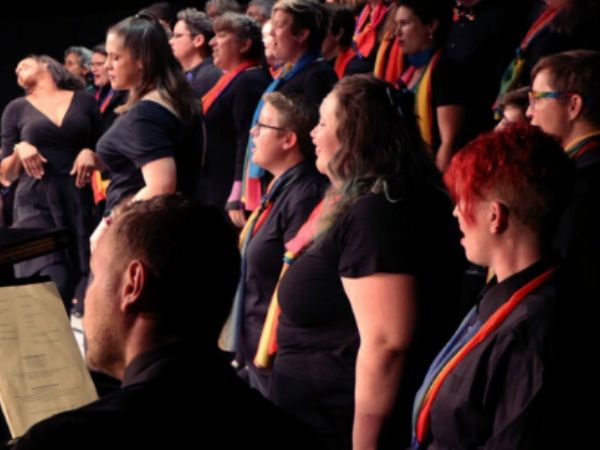 The Portland Lesbian Choir was founded in 1986 to “bear witness to the power of music to transform the world – or at least our corner of it”. Their culture is rooted deeply in the lesbian community and they are made up of people of varying sexual, gender, and relationship orientations – everyone is welcome! They strive to share their own stories, celebrate their differences, and to ultimately “practice forgiveness as we learn to speak a language that serves us individually and as a whole”. The Portland Lesbian Choir is a non-audition choir that welcomes anyone who wishes to join.

Info and photo courtesy of plchoir.org 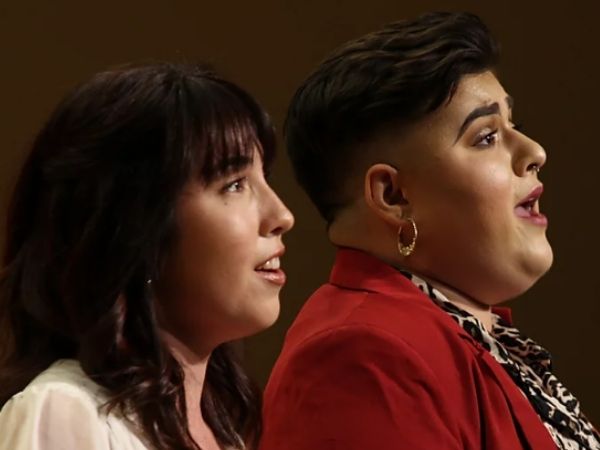 Queer Opera was founded in 2017 at Portland State University to “provide a safe stage for LGBTQIA singers and allies to tell queer stories through the traditional genre of opera”. They use nontraditional casting methods, where roles are matched with people based on how they identify, rather than the genders within the pieces or their vocal types. Queer Opera began as a one-week workshop and is growing into a living, breathing stage dedicated to reclaiming opera to make it for everybody.

Info and photo courtesy of queeropera.org

The mission of the Rose City Pride Bands is to be “a welcoming space for members and allies of the LGBTQ+ community to forge connections through music”. The Rose City Pride Bands is a non-profit organization, formed in 1990, to provide a place for LGBTQ musicians and allies to use music to grow our connections with each other and our communities. The organization encompasses three groups: the Rose City Wind Symphony, the Rose City Swing Band, and the Rose City Marching Band. The Rose City Wind Symphony is a traditional wind ensemble that includes percussion and is active on a national level as a member of the Lesbian and Gay Bands Association and the Association of Concert bands. They delight audiences four times a year with concert performances at Kaul Auditorium, Directors Park, and the Legacy Emmanuel Atrium. The Rose City Swing Band is a 16-piece Big Band that performs for local dances and Pride events. The Rose City Marching Band is the most visible band under the Rose City Pride Bands umbrella as they are an 80-member group made up of wind players and percussionists that participates in a multitude of Pride events from May through October.

Info and photo courtesy of rosecitypridebands.org

Soromundi: The Lesbian Chorus of Eugene 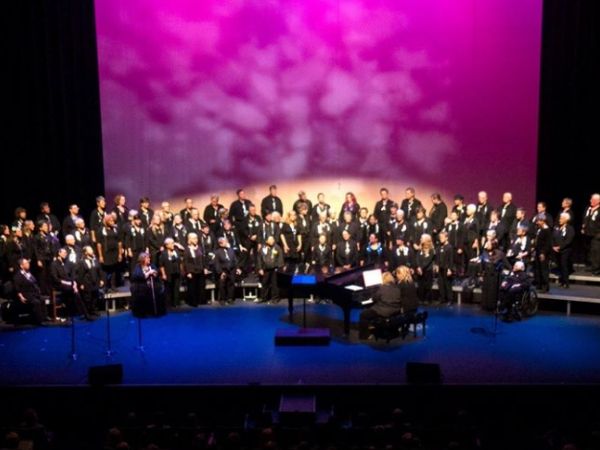 Soromundi, meaning “sisters of the world”, was founded in 1989 with its first rehearsal taking place in Karm Hagedorn’s living room. One year later in 1990 they gave their first performance to a wild reception after only three songs at the Unitarian Universalist Church of Eugene. They have since produced three records: Sentimental Journey, Circle Me Sisters, and Love, Rescue Me. They have also performed by invitation at the Gay and Lesbian Allied Choruses Leadership Conference, performed at the Hult Center for the Performing Arts, performed with the UO School of Music’s Orchestra Next and dancers from Denbaya, and given countless other gorgeous concerts throughout the 30 years since their creation. Soromundi is a non-audition choir and their mission is “to come together in song to celebrate ourselves and our community as a visible expression of lesbian pride”. They welcome members of all orientations, races, ethnicities, abilities, economic statuses, and religions. They embrace all women, whether they self-identify as lesbian, straight, bisexual, cisgender, transgender, intersex, gender non-conforming, and myriad other identities that find home within women’s spaces. 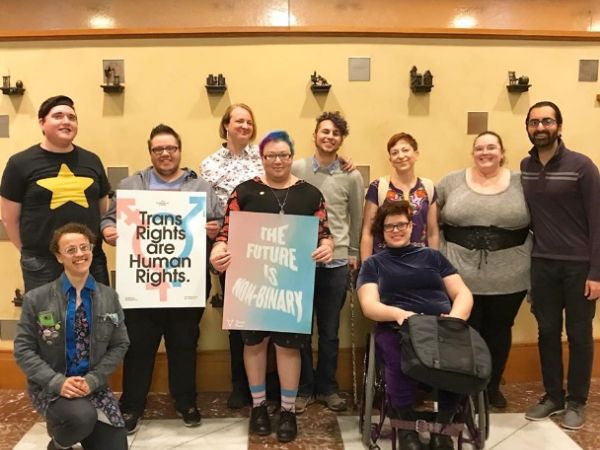 Transpose PDX, founded in 2017, is made up of the Transpose Community Choir and Acchord. They are “the ripple-starters, the ambassadors of change, and the consciousness-raisers. We humanize trans folks through the most human of art forms — singing! Through rural outreach performances we become visible; may the people who encounter us no longer feel alone, gain the courage to be their authentic selves, and be inspired to start their own ripples”. The Transpose Community Choir is a non auditioned accompanied singing group that utilizes a non-binary choir structure and Acchord is an auditioned a capella group focused on musical and social outreach. These choirs are a space for the transgender, non-binary, and gender non-conforming members of the community. They are open to anyone with a song in their heart that is over the age of 18.