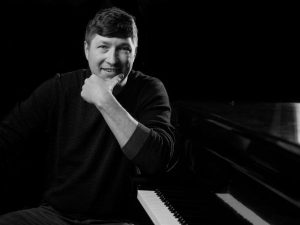 National Radio Day crackles to life on August 20th every year in the United States for us to celebrate the miracle of sound waves travelling to our ears from far and wide. The history of National Radio Day is about as fuzzy as an untuned radio though, with rumors of its beginnings lying somewhere in the early 1990s. The purported seed of this holiday is the WWJ radio station in Detroit, Michigan, who began its daily broadcasts as the “Detroit News Radiophone” on August 20, 1920, as one of the first pioneers of commercial radio (via Wikipedia).

In honor of National Radio Day, All Classical Portland Intern Kelly Lantz interviewed our Chief Engineer Mike Alston on what it’s like to run the technical magic behind the music. Mike has a vast wealth of knowledge and experience in this field and is an excellent storyteller, so if you’re curious about how you’re able to hear the dulcet tones of All Classical Portland on your own radio, read on! 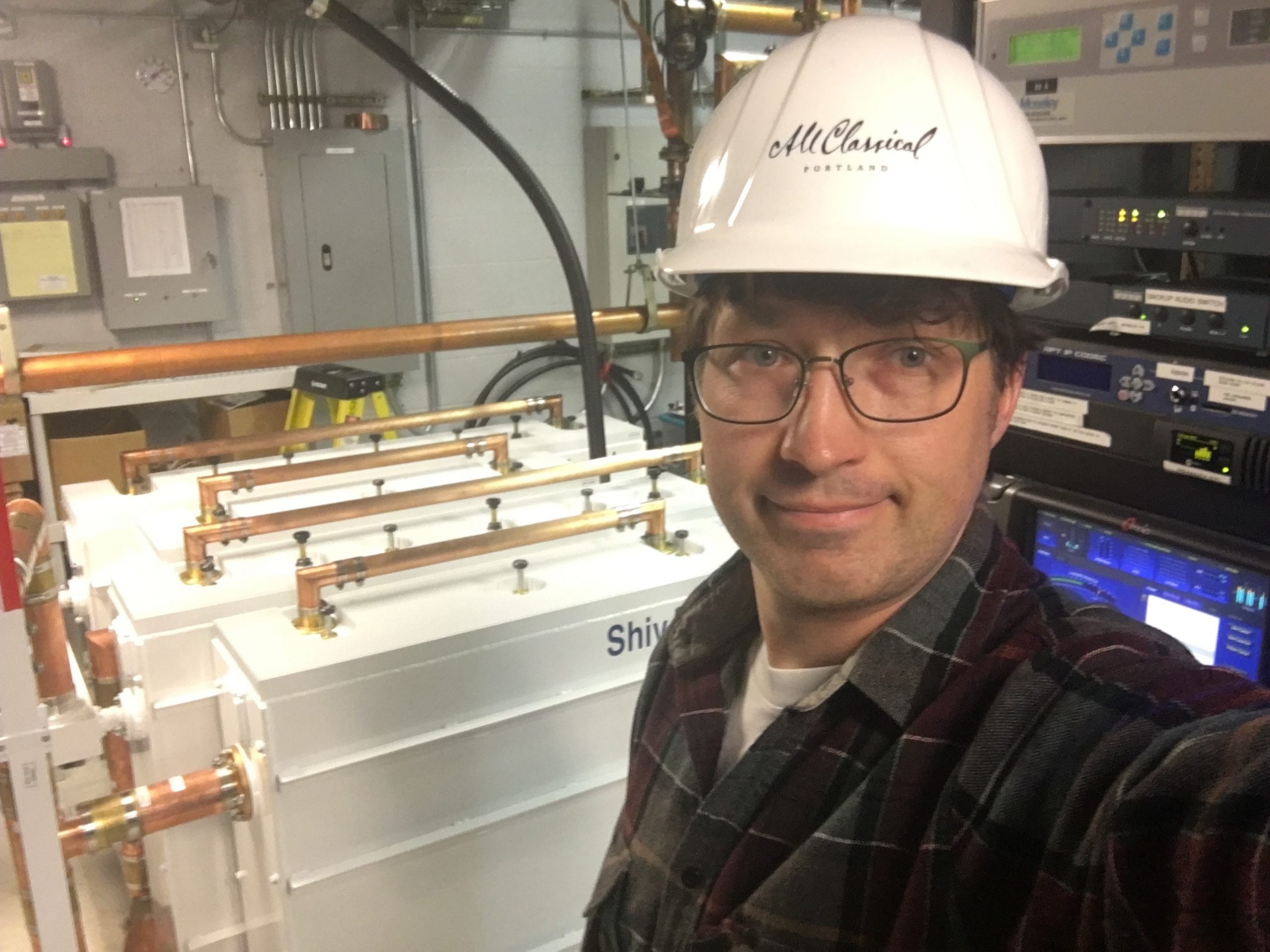 How did you get into the field of radio engineering?

I went to school for computer science and was working as a field service technician for POS networks. Being both a musician and a recording engineer, I had also started my own music recording studio. I had an old 8-track tape machine that need repair and was referred to Mike Everhart, who happened to be Chief Engineer for KXL-FM radio at the time. He told me of the work they were doing to consolidate 6 radio stations to what is now Alpha Media Portland. I really wanted to get my foot in the door working in radio, so I offered to work for free. He laughed and told me they’d have to pay me. Six months later, I was hired as Remote Broadcast Engineer, and quickly took on other duties, including running front of house for the Bing Lounge/Skype Live Studios and eventually worked my way into a full-time engineering position.

What does your day to day look like as the Chief Engineer for All Classical Portland?

My typical day starts with looking for emergencies or any pressing issues first, then checking the health of each of our transmitter sites. I make sure remote control of our equipment is working, and that our transmitters are operating within their licensed parameters. I’ll check the forward power, which is allocated and licensed to us by the FCC as well as reflected power to ensure the transmission line and antennas are still happy. The FCC only allows a certain amount of power so that you don’t interfere with other licensed stations.

After that, I like to check in with my team to see what’s on their plate and if I can help. There’s always a back-up chore list! In terms of engineering requests, they encompass a wide range of things. I just had a request from T Mobile in Hood River, they’re asking us to coordinate powering down our transmitter so it’s safe for them to do maintenance on their cell tower, which is on the same tower as our FM antenna. Sometimes the hosts have computer or IT related requests. I deal with microphone processing/adjustments for vocal timbre and everything in between. 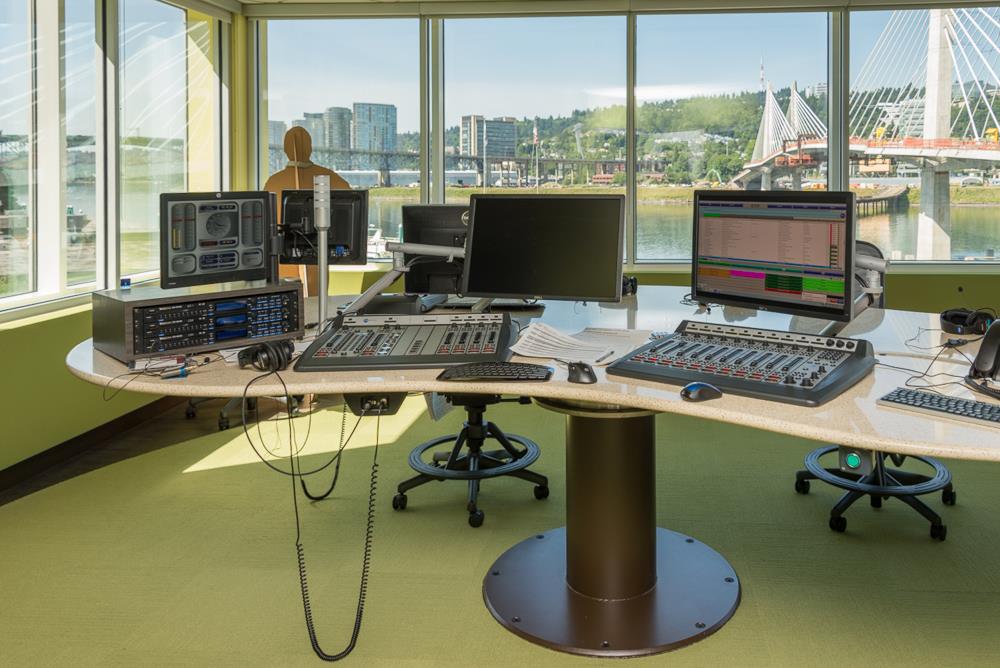 The On Air Suite at All Classical Portland 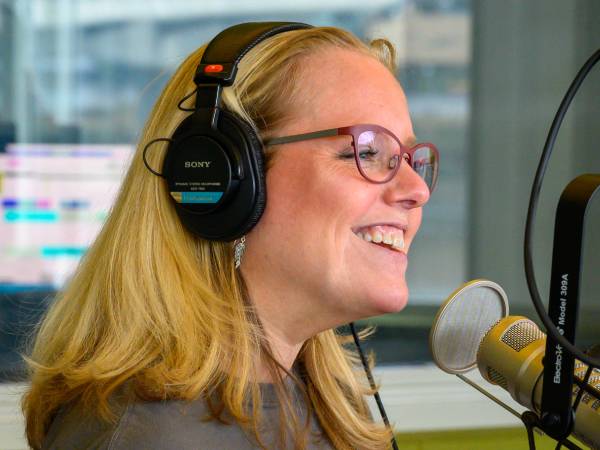 That’s an interesting tidbit about the microphones, what can you do to adjust for differences in peoples’ vocal tones? What is considered “good microphone technique”?

There are lots of things you can do to adjust for each individual voice type. Vocal processors have compression and de-essing, which are used to contain loud peeks, lift quiet words and help adjust for a warmer/softer tone in the voice. If set correctly, the de-esser can be applied for many different voices sharing the same mic. You can set the threshold so a person’s voice with soft S and T sounds will pass the audio unaffected, but for a voice with very prominent/sharp S and T sounds the de-esser will engage and clamp down on the sharp frequencies.

In the studio we use dynamic microphones. Mostly Electro Voice RE 27’s and Shure SM 7 B microphones. All the hosts have their own pop filter and headphones and have been trained over the years on proper microphone technique. For these mics, you want to be off the microphone about three fingers at a 45-degree angle so your S’s and T’s don’t go directly into it. Although, it’s always best to use your ears and experiment with finding what sounds best for your voice. If you have a really warm voice you might get an overwhelming amount of proximity effect/bass tones if too close to the mic, so you won’t want to be as close to the mic as someone with a thinner voice. The closer you get to the microphones, the warmer your voice gets, so it’s about finding the sweet spot.

Continuing down the equipment path, what is All Classical Portland’s home antenna site and what is it like?

Sylvan Tower is our main transmitter site. Since we share a facility with 2 other radio stations, it made since for us to form a partnership at this location. We’re 1/3 part of the NAP (Non-Comm Antenna Project). We share a combiner, the main transmission line, and antenna. In order to transmit several frequencies on the same antenna, you need to use a combiner. The one we use at Sylvan was made by Shively. The combiner contains four different “cavities”, that each radio station feeds/connects the main RF output of their transmitter to. The combiner performs all the magic of keeping the separate frequencies working together without interfering with one another. There are tuning rods within the cavities that are finely adjusted and balanced to make sure they all work together correctly. 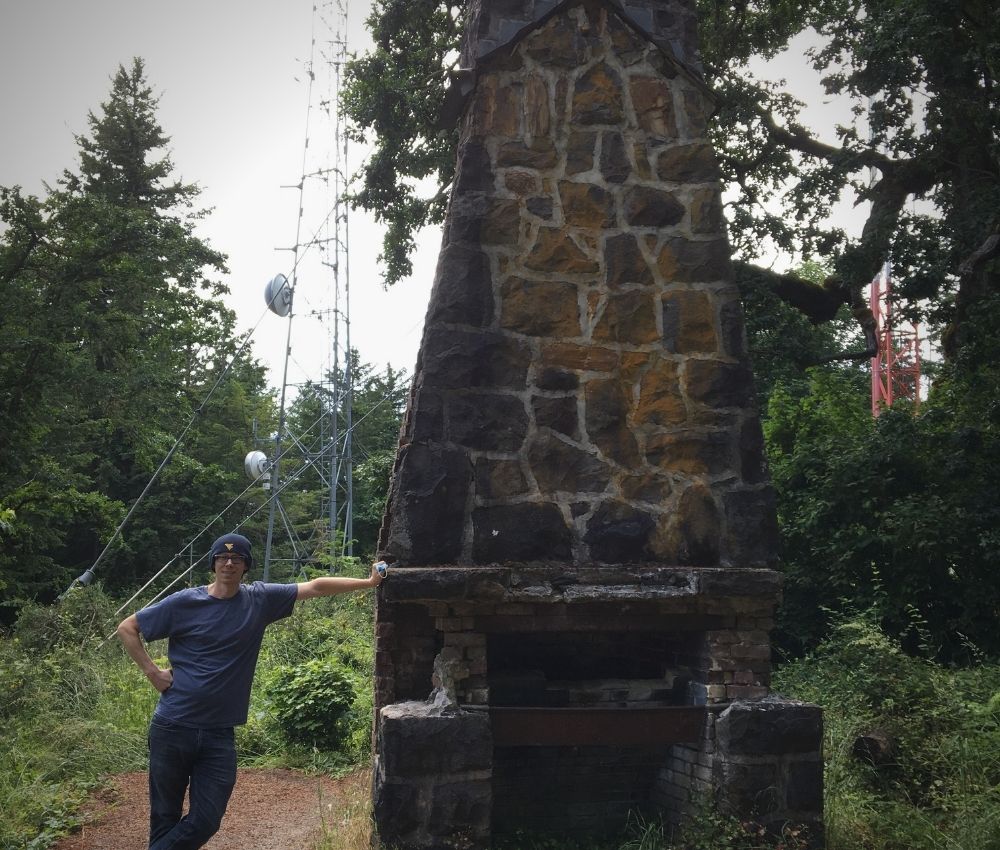 Engineering Assistant Daniel Hornbeck near one of our transmitters 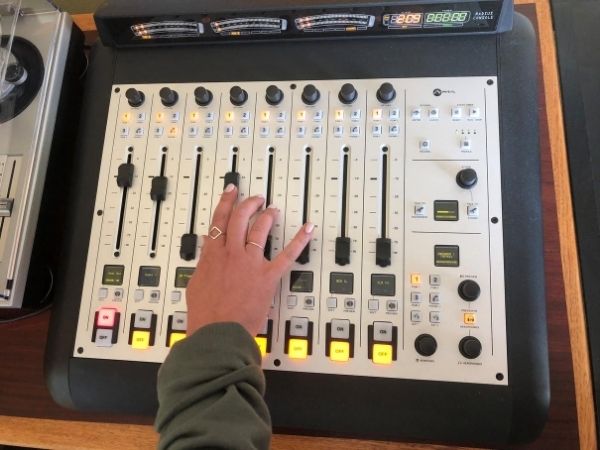 Describe the journey that a piece of music makes to get from the radio station to the listener’s radios?

The process begins with the composer. We’ll get an audio recording, sometimes from a physical disc and sometimes through email or a download from an artist or label. I’m sure there are exceptions, but we make effort to preserve the original recordings in their entirety as it was intended by the composer or conductor. Our Director of Music and Programming, John Pitman, selects the music from either new performances or from our very large archive of music history. John, with help from our traffic department, will then import the audio into ENCO. ENCO is our automation system, which is like a very fancy iTunes. He will also enter all the metadata into the newly created cut. The metadata include things like the composers, artist, and title information. When the song is played on the radio, the metadata in ENCO is then sent to RDS encoders at each transmitter site. The RDS data is the text that shows up on your car stereo letting you know what you’re listening to.

What kind of maintenance does the radio equipment require?

In the winter we make sure our satellites don’t ice over.  We sometime need to sweep snow and ice off the dishes to ensure good reception for SAT programming. We also need to maintain our generators and UPS’s (uninterrupted power supply), which means replacing batteries, belts, oil changes etc. When we do network upgrades, sometimes we have to take the main STL down which would take the station off the air, so we carry a cellular cradle point and temporarily connect an internet streaming device (it’s like a band aid for the audio stream) so we stay on the air despite having to take equipment down. 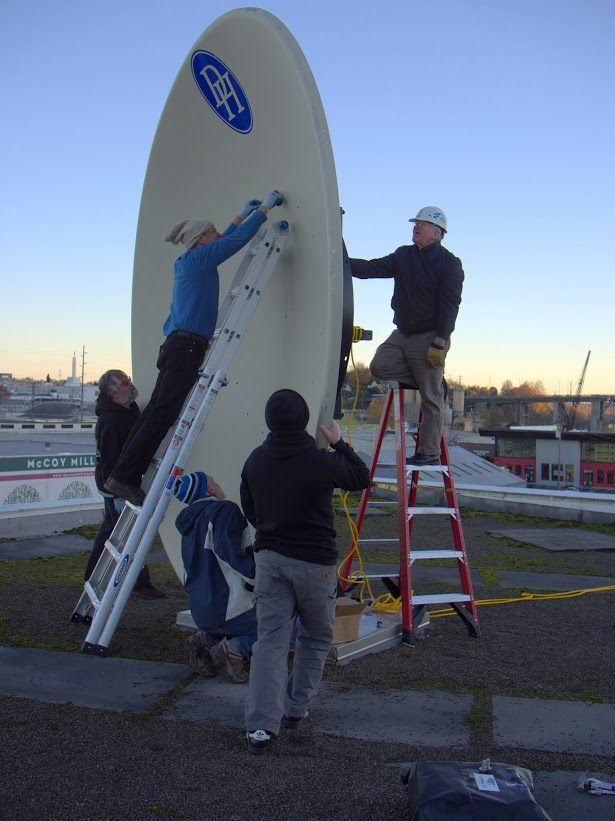 Director of Radio Traffic Jordan Lewis (left) and team install a new dish on the roof of All Classical Portland, 2014 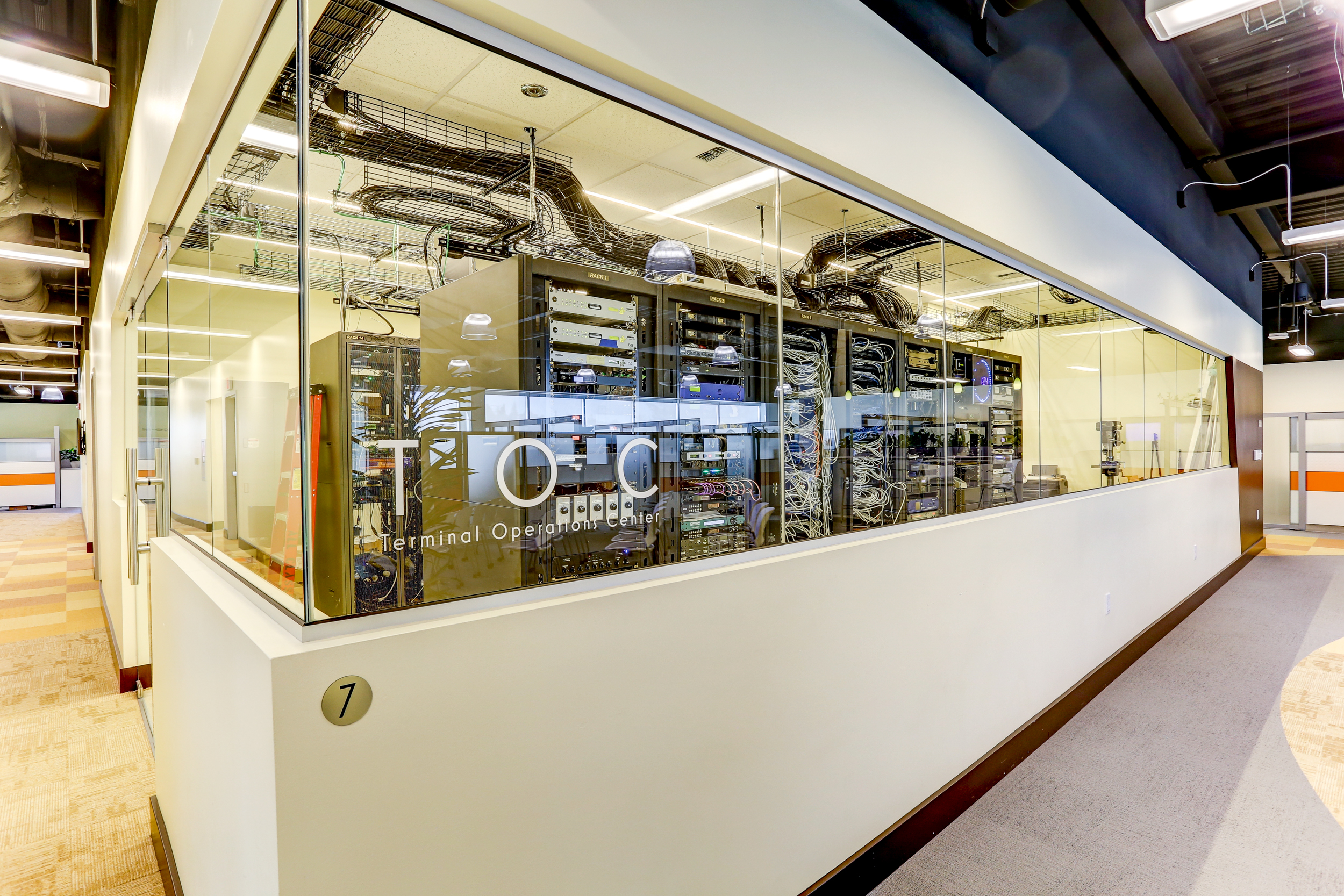 The Terminal Operations Center (TOC), the heart (and brain!) of the radio station

They are called call letters and they are assigned by the FCC in the US (and other countries have their own standards). Most stations in the US have four call letters, although there are still 3 letter call signs assigned to stations that are grandfathered in. There are some exceptions, but most stations that have a W at the beginning are East of Mississippi and stations with a K at the beginning are West of the Mississippi. They tell you what type of station it is, what region you’re broadcasting from, the frequency, etc. We have 2 translators as well. The FCC requires that stations licensed as translators must rebroadcast the over-the-air feed of the station they’re assigned to. You’ll be able to tell a translator call sign because there are numbers between 200 and 300 accompanying the letters. For example, our Corvallis transmitter that is licensed to translate our KQOC Gleneden signal is K239BP.

How do repeater stations work?

Repeaters are used to extend another radios signal and are primarily used for two-way communications whether its amateur radio or emergency services. They work differently than translators in that they can receive from several different stations (one at a time) all tuned to its incoming frequency and will rebroadcast on a different outbound frequency. The repeater is usually programmed with a control tone and will only allow control/rebroadcast if the connecting radio is also programmed to send that same control tone. It will re-broadcast or repeat what is sent to it from another station. Anyone tuned to the repeaters outgoing frequency can listen in, even if you don’t know the control code. 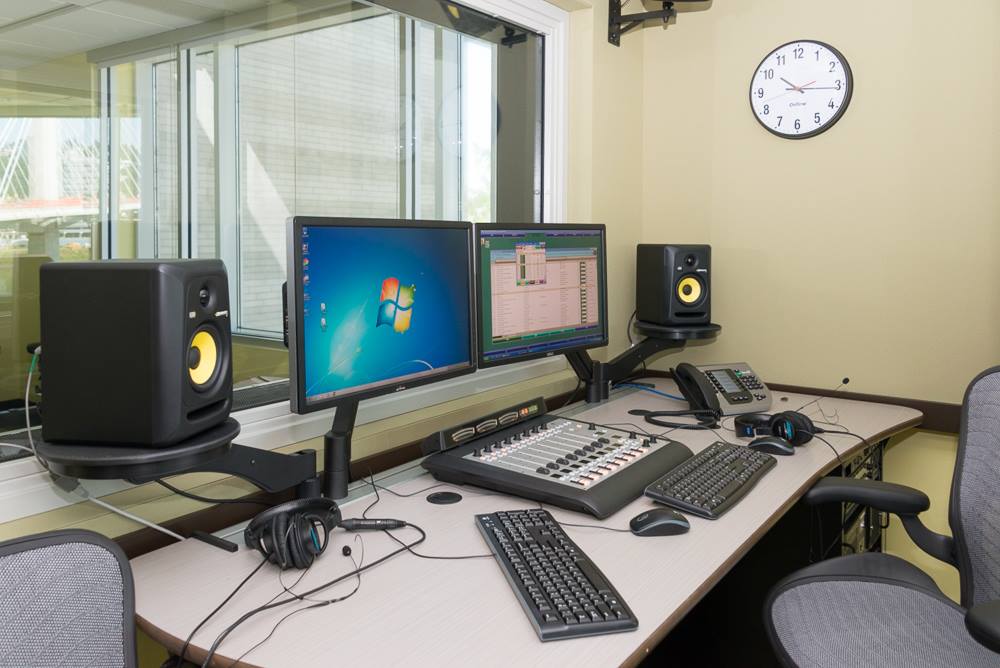 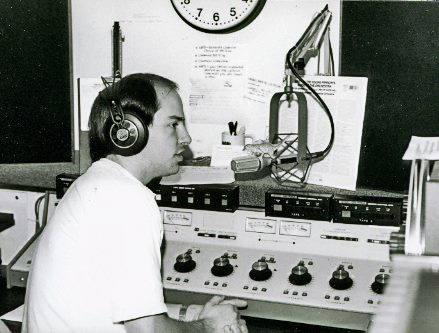 Director of Music and Programming John Pitman on the air, circa 1992

The history of All Classical mentions something about the original set up having issues with signals “bleeding” into other signals, what can cause that?

All kinds of different things can cause interference, but I had to do some digging on this one. Originally, we were set up at Benson Polytechnic High School which had an AM station in addition to the FM station. It’s possible that since both the AM and FM were on the same campus, some of All Classical’s studio equipment was getting overloaded with the AM signal due to a high RF environment. It really wasn’t that long ago, but it was the early beginnings of this station and it’s possible that some of their audio cables could have been unbalanced/unshielded which would make them more susceptible to interference. In order to filter out the AM frequencies from the studio equipment you can use an iron/ceramic material called ferrite, which can come embedded in a little plastic housing that easily connects to an audio or power cable.

That’s amazing that you can use an iron material like this to ultimately assist in producing radio! What do these things look like? 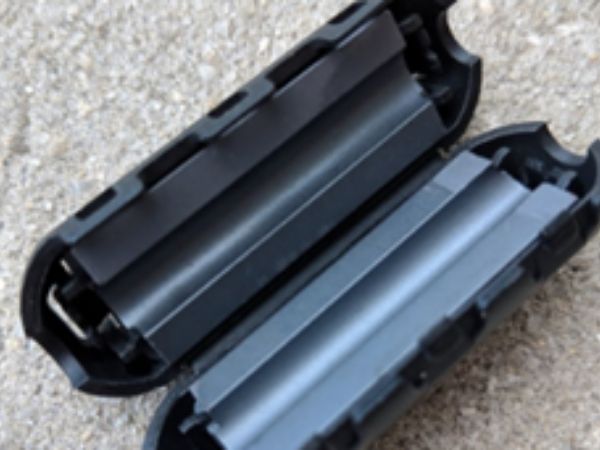 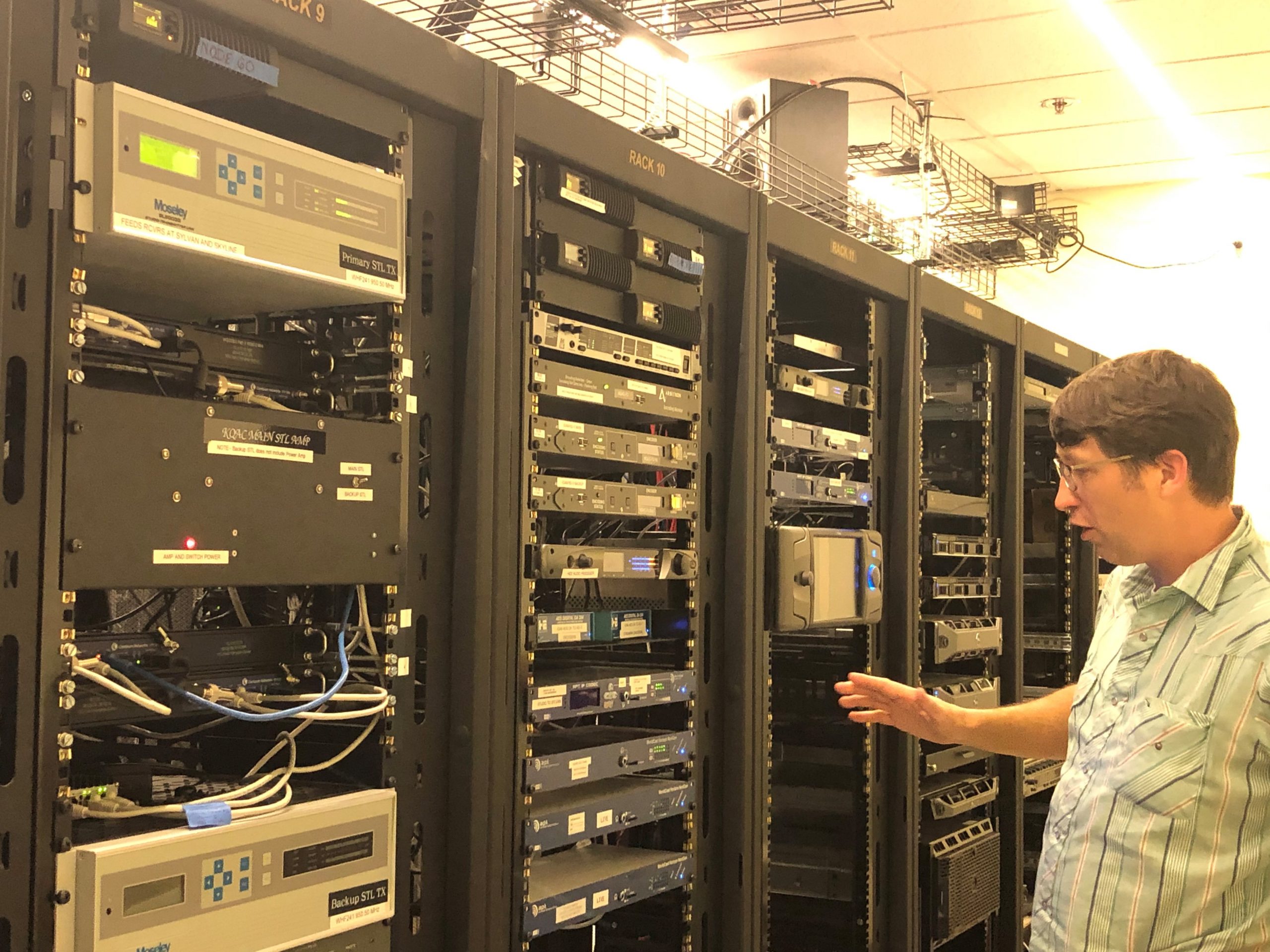 Mike Alston in the TOC

Has there been a particular day or event that you’ve experienced with All Classical Portland that really made you think “Wow, I really love working with this station”?

When I first started, I was nervous for a lot of the usual reasons that come with starting a new job. There’s always a period of figuring out how everything works in a new place, especially in an engineering department with 8 transmitter sites. This was also my first time working for a public radio station. The fact that we’re listener-supported makes it different to work with than other opportunities I’ve had, and I’m really enjoying it. As I was getting to know everyone and the inner workings of the station, I was really taken by how responsive everyone at All Classical Portland is to their listeners. There’s a commendable focus on responding back to individual listeners and toward community engagement. All Classical Portland has enormous regard for their listeners, which reminded me of home and the small town feeling I grew up with. To me, that is what radio really should be about.