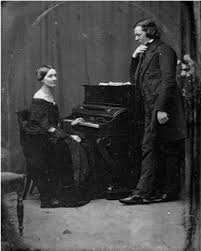 Clara Schumann was a well-respected pianist and composer, Robert Schumann a composer, pianist, and music critic. Clara’s father, Frederick Wieck, was also a pianist and was in fact Robert’s teacher, but he opposed the match. At the time, the opposition would have been enough to prevent their marriage, but they sued him and were given permission by a judge to marry anyway. In the first year that they were married, Robert wrote over 130 songs with the vast majority being inspired by his wife and his love for her.

Over the course of their marriage, they kept a diary of their life together, both on a personal level and a musical one. Robert had been prevented from becoming a fully realized pianist because of a hand injury, but Clara premiered many of his compositions. Both as individuals and as a couple, they made tremendous contributions to the Romantic era. They had eight children together, and took young artists such as Joseph Joachim and Johannes Brahms under their wing.

Tragically, Robert Schumann struggled with mental illness in a time less than capable of helping him. After a suicide attempt, he was institutionalized, and lived out the rest of his days there. The friendships they had developed with people, including Brahms, gave Clara a support system through the hardship, and she continued to tour and teach piano. After his death, Clara also continued their musical partnership by editing his published works and playing them. When she passed away 40 years later, she was buried beside him.

Photo courtesy of the Stanford Libraries 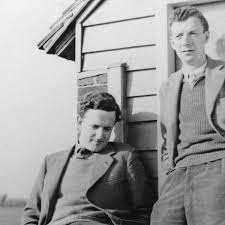 Benjamin Britten was a composer and conductor, best known for his operas pieces, and Peter Pears was a talented tenor. They were partners both romantically and musically, with Britten writing many of his works with Pears’ voice in mind. Pears performed in more than ten of Britten’s operas, and together they made recordings of his work.

Pears had been somewhat hesitant about pursuing his vocal career instead of playing piano, but after meeting Britten in 1937 he was hesitant no longer. It’s said that Britten composed the first of his works inspired by Pears within weeks of their meeting. Their relationship started out as a close, but platonic, friendship until 1939 when they traveled to America together. In 1940, Britten composed his first song cycle for Pears entitled Seven Sonnets of Michelangelo.

In 1947 they founded the Aldeburgh Festival together, and the Britten-Pears School for Advanced Musical Studies in 1972. Their partnership left behind contributions to music both in the form of compositions and in institutions. After Britten’s passing in 1976, Pears remained involved in the school and the festival they had created. Before he died, Britten had been offered a burial at Westminster Abbey but declined. He knew that Pears would not be able to be buried beside him if he accepted and so they were both buried, a decade apart, at Aldeburgh Parish Church.

Photograph courtesy of the Britten-Pears Foundation 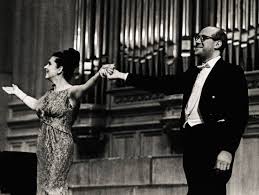 Mstislav Rostropovich was a cellist, pianist, and conductor, widely considered to be one of the greatest cellists of the 20th century. Galina Vishnevskaya was a well respected soprano singer. They performed together, and recorded together, fairly regularly. While they made for an impressive musical duo, they were also aligned in causes regarding human rights.

The couple believed in art without borders and democratic ideals, putting them at odds with their country, the Soviet Union. Many artists faced persecution in Russia during this time, including Dmitri Shostakovish who was a friend of the couple. When Shostakovich was dismissed from his professorships for political reasons, Rostropovich dropped out of the Moscow Conservatory in protest. As a result of this, and other political actions, in the early 70s Rostropovich and Vishnevskaya were severely limited from foreign touring and given little opportunity to perform in Russia. They weathered the political storm together, and eventually moved to the United States in 1974.

While they continued their artistic endeavors in the United States, they also founded the Rostropovich-Vishnevskaya Foundation in 1991, dedicated to supporting the health of children worldwide. While Vishnevskaya had been married before, her marriage to Rostropovich was her last marriage and the longest. They were married from 1955 until his passing in 2007. They are buried together at Novodevichy Cemetery in Moscow.