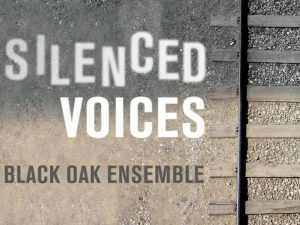 2020 (specifically, January 27) marks the 75th anniversary of the liberation of Auschwitz, the WWII concentration camp that is symbolic of the persecution and murder of millions of Jews and other groups by the Nazi regime.  In addition to the handful of people who survived the camps, a small body of art, including music, has emerged over time.  Music written by prisoners of the Nazis who persevered in their art despite the conditions.  The string trio Black Oak Ensemble (violinist Desirée Ruhrstrat, violist Aurélian Fort Pederzoli and cellist David Cunliffe) first encounter of much of this music was in a shop in Budapest, and at first, they didn’t know the circumstances of the composers of these works.  This debut disc is the result of several years of research and performance, including at the Czech camp at Terezín.

The music is at times filled with a sense of foreboding, at other times sadness, but also great energy and even humor.  They were written between the late 1920s (when the first signs of fascism were appearing in parts of Europe) to the 1930s era of persecution, and finally to the last years of the war (most of the composers went from places like Terezín, where artists were kept, to the death camps such as Auschwitz.  Only one composer on the disc, Géza Frid, survived the war and lived in the Netherlands to 1989).

The interview is with Cunliffe and Pederzoli, who share their unique connection and admiration for this music which, finally, is “silenced” no more.