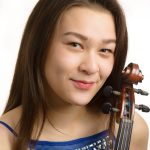 On Deck with Karlie Roberts

In this episode of “On Deck” we’ll get to know 17-year old violist Karlie Roberts.

Karlie lives in Eugene, but she will be performing in Portland on May 4th – she’s one of the 8 winners of a spot in this year’s MetroArts Young Artist Debut concert.  (This year’s concert will take place at Trinity Cathedral; Karlie will be performing Mozart’s Sinfonia Concertante with violinist John Fawcett.  All Classical Portland will be broadcasting that concert on May 12th.)

Winning a spot on that MetroArts concert is quite a feat… but last Fall, Karlie achieved something else pretty spectacular: at age 16, she won a spot in the viola section with the Eugene Symphony.