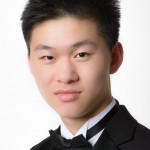 On Deck with Richard Lu

Richard Lu is an 18-year old cellist, and is one of the winners of this year’s MetroArts Young Artist competition.  Two years ago he was featured “On Deck” as a winner of the Oregon Sinfonietta’s Concerto Competition.  In this episode, Christa Wessel chats with him to see what has changed in his life in the last two years.  (He tells us he can vote now, he has developed tendonitis, and has decided to pursue a medical career rather than a musical one.)