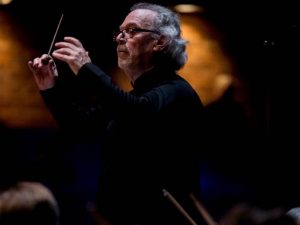 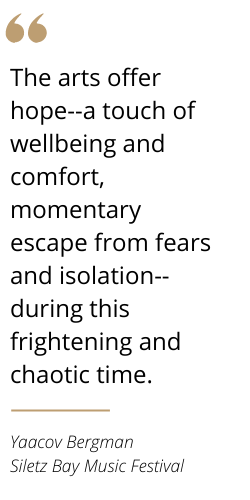 How are the arts playing a role during this critical time?
The arts offer hope–a touch of wellbeing and comfort, momentary escape from fears and isolation–during this frightening and chaotic time.

What has been the most notable / most unpredictable / most challenging impact of the COVID-19 pandemic on your organization? Biggest financial challenge?
The uncertainty and inability to plan for the future is the most challenging aspect for us. Siletz Bay Music Festival presents a two-week festival each summer. This year, our festival was scheduled to begin June 18. Our performances are in Lincoln County, Oregon, which, as of June 18, had the highest incident of COVID-19 in Oregon, the highest unemployment rate in the state, and a population 1/3 of which is over 65. Although we could not have predicted in March how hard the pandemic would hit us, we knew that with the unpredictability of the virus, the vulnerability of our audience, and necessary travel for our musicians to come from all over the country, as well as internationally, that it was prudent to cancel our 2020 Festival.

Cancelling the season eliminated revenue from ticket sales and fundraisers.  Economic uncertainty and changes in tax laws greatly reduced the financial confidence of many of our donors.  Our revenue stream virtually stopped. Without the 2020 festival, we disappointed approximately 65 musicians who had planned to perform. 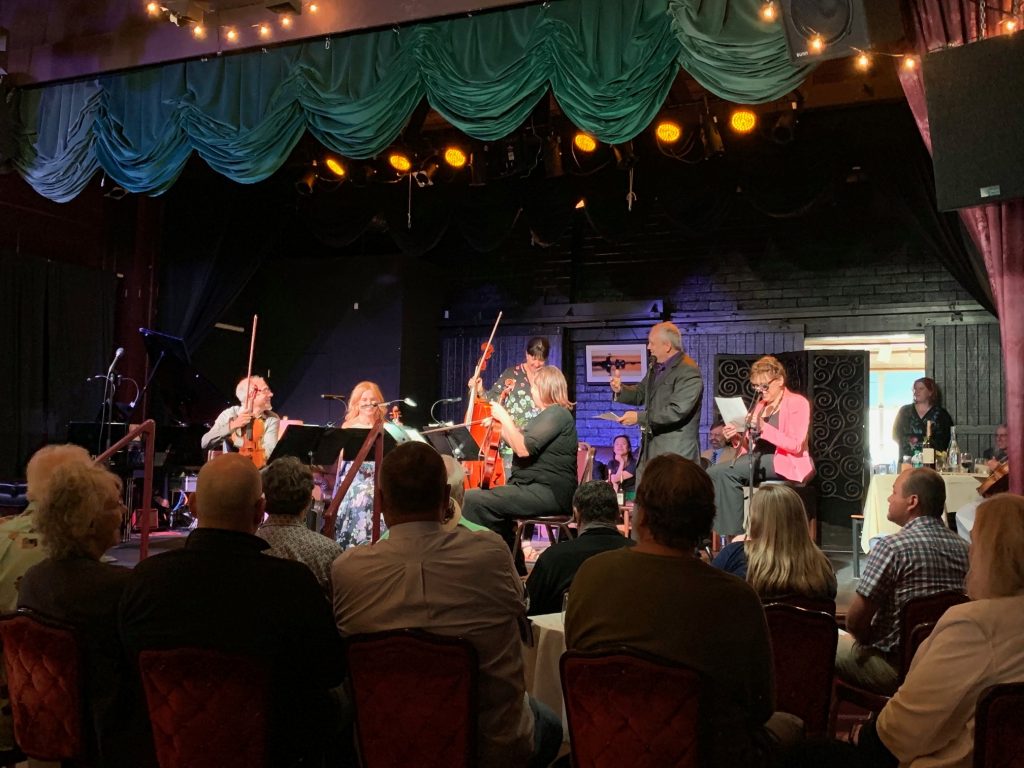 To date, what steps have you taken to mitigate that impact?
We decided to operate without an Executive Director for the near future. The board of directors has been restructured into committees, each responsible for functions that would ordinarily be performed by an Executive Director. We are taking this time to reflect, develop policies and procedures, and document our practices, so we will be stronger in the future.

We collaborated with the Lincoln City Cultural Center to produce on-line performances, with our share of donations going to the musicians. Recognizing our importance to our patrons and their importance to us, we are making sure to keep them informed. We have hired a grant writer and a social media consultant to provide expertise the board members do not have.

What kind of innovation in management has developed for your your organization, and what challenges have you encountered when implementing new innovative ideas?
Restructuring to more of a working board was met with enthusiasm. Each board member serves because they love the festival and is willing to put out the extra effort to make it succeed. There was absolutely no resistance. 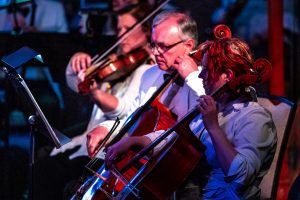 The need to hire expertise the board does not possess was immediately apparent and the board agreed unanimously to hire a grant writer and to increase the expenditures for a social media consultant.

What are the short-term and potential long-term effects of this shut down for your organization and the arts in general?
Short-term, our 2020 Festival is cancelled. Long-term? Like every other performing arts organization, we wonder what the future will be. Will people be willing to gather in large numbers to hear music, no matter how great? When we know more about this virus–when a vaccine is developed and readily available–will audiences once again feel comfortable sitting close together for the length of a concert? These are unknowns we all need to consider as we plan for the future.

What is a positive collaboration or initiative born as a result of this situation within your organization or that you’ve seen from your peers and colleagues in the arts industry?
Siletz Bay Music Festival has had a long-term relationship with the Lincoln City Cultural Center. From the festival’s beginning, concerts have been held at LCCC’s facility. When the pandemic was declared, LCCC was quick to set up Creative Quarantine virtual performances. Siletz Bay collaborated with LCCC to present two on-line virtual performances by Festival musicians. The two organizations are continuing to discuss changes that may need to be made when live concerts are 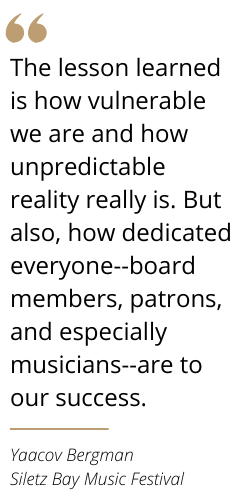 What is the biggest lesson learned as a leader during this crisis?
The lesson learned is how vulnerable we are and how unpredictable reality really is. But also, how dedicated everyone–board members, patrons, and especially musicians–are to our success.  Concentrating on our mission–to bring high quality music performances and education to the Central Oregon Coast–and being flexible and innovative are all critical.

Understanding that the future is hard to predict, how might the lasting impacts of COVID-19 change your upcoming season? Should the tone of pieces or performances change?
Our 2020 concert season is cancelled, of course. We are looking at virtual performances and smaller audiences once we can present live performances.

Hopefully, our 2021 season will proceed as planned in June/July. There are no plans to change the festival’s artistic mission; programming will be based as always on artistic considerations only.

Regarding the creative process, what has been a source of inspiration for you/your organization at this time or how has your creative process changed and evolved? What outlets or channels have you sought out to continue to express your creativity, personally and/or professionally?
As we face a pandemic and great uncertainties; as we ask people to remain isolated and to avoid social contact, music can become a refuge and offer some hope and comfort. We will continue to do our part to provide such refuge, hope and comfort through digital platforms. 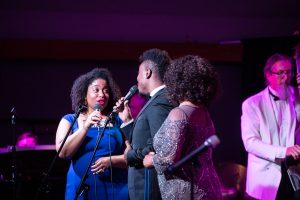 What message do you have for the artists and fellow art leaders in our community today?
Let’s work together for as rapid a return to live concert performances; to building on past successes toward a better future and continuing to share our love of music.

What question do you wish someone would ask?!
What program are you about to conduct tonight?

When looking to the future, what brings you hope?
Music and our musicians, as well as the support of so many people.

Yaacov Bergman, Conductor and Music Director, has received consistent rave notices and standing ovations for his interpretations of a highly varied repertoire, and has been acclaimed world-wide as an intensely communicative musician. Maestro Bergman is Music Director of the Portland Chamber Orchestra, the Walla Walla Symphony, the Siletz Bay summer Music Festival at the coast of Oregon, former Music Director of McCall SummerFest, the Colorado Springs Symphony, the New York Heritage Chamber Orchestra, and the 92nd St. Y Symphony in New York City. His versatility has led to frequent guest appearances across the globe conducting the symphonic, operatic, oratorio and pops repertoires.

Maestro Bergman guest conducted with the New Russia Philharmonic , Belarus National Chamber Oechestra in Minsk, Osaka Symphonica, the Buffalo Philharmonic, the San Diego Symphony, the Vancouver,  the Edmonton and Kitchener-Waterloo Symphonys in Canada & the West Virginia Symphony, repeat appearances with the Lodz and Bydgoszcz Philharmonics in Poland, a debut performance with the Vienna Radio Symphony Orchestra, a third appearance with the Brooklyn Philharmonic in New York and a concert tour with the Israel Sinfonietta and The Israel Kibbutz Orchestra. He recently served as principal guest conductor of the “North Atlantic Summer Music Festival” in Denmark. Maestro Bergman conducted a series of successful symphonic concerts in Cairo, Egypt in 1995 and 1996 as the first American/Israeli conductor to appear in an Arab republic.

Born in Israel, Yaacov Bergman’s early musical training began with violin and vocal studies, but he soon expressed an avid interest in composing and conducting. After graduation from the Rubin Academy of the Hebrew University, Jerusalem, with majors in conducting and composition, he completed post-graduate studies at the Mannes College of Music in New York as a student of Richard Westenburg. He pursued further conducting studies under the guidance of Charles Bruck, a disciple of Pierre Monteux, as well as private study under Leonard Bernstein. In 1998 he was the recipient of an Honorary Doctorate from Colorado University.