Debussy and the Poetic Image

The 100th anniversary of Debussy’s death was this past March 25th. Debussy’s adventurous uses of harmony and orchestration would come to impact nearly every distinguished composer of the early and middle twentieth century. His music leaves behind classical structures and agendas and moves toward beauty for beauty’s sake. One experiences a profound sense of dreamlike improvisation and wandering when listening to Debussy’s music.

How did Debussy come to reach these new territories of sound? Enter Europe at the end of the 19th century. In the world of classical music, it was rapidly becoming more difficult for composers to have their new music performed. For the first time, classical music was experiencing the rise of a permanent repertoire of older works by eminent figures such as Mozart and Beethoven. Concert programs, filled with repeat performances of staple classics, left less room for contemporary pieces.

Living composers, struggling to secure a place in this crowded repertoire, faced the challenge of writing works that could offer something new, yet would still be considered worthy of being played alongside the established canon. This challenge, a paradox of creating new sounds while still respecting the classics, became the defining feature of modernist music at the fin de siècle.

Each composer found their own individual solutions to this challenge, leading to a proliferation of diverse styles and approaches in classical music. Some composers, such as Mahler and Strauss, extended the romantic harmony of Wagner. Others went on to explore new “post-tonal” ways of organizing pitch, eventually leading to practices such as atonality (music that lacks a key or tonal center) and serialism (music based on formulaic orderings of the twelve notes of the chromatic scale).

One composer often considered a leading “founder” of this new modernist movement was Claude Debussy (1862-1918). Common for all modernist composers was the act of defying traditional aspects of the language of classical music. Debussy, however, arguably challenged not only the language, but the whole way of conceptualizing and listening to classical music. 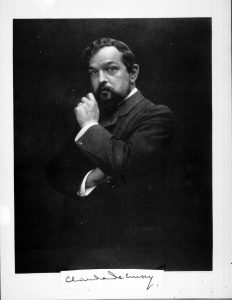 Portrait of Claude Debussy from 1909.

The son of a civil servant, Debussy was born in France and studied at the Paris Conservatory. Debussy’s music, however, breaks away from his traditional training, indulging in sound for sound’s sake and in the simple pursuit of pleasure and beauty. Unlike established practices in Western music which create a sense of tension and resolution through goal-oriented motion towards a tonic key, Debussy’s music undermines the need to resolve entirely. Instead, in Debussy’s music, the listener is invited to enjoy each moment as it comes. While there are still definable keys in Debussy’s music, he moves through them via non-goal oriented processes: one sound world merges and melds into another. Debussy’s music often consists of juxtaposed images, which he creates out of motives, harmony, exotic scales, or tone colors.

Debussy found new ideas from a multitude of diverse sound worlds: Russian composers such as Rimsky-Korsakov and Musorgsky, medieval music, and music from Asia, including Chinese melodies Javanese gamelan music. Debussy also heavily drew from non-musical sources, including Impressionist painting and Symbolist poetry. Debussy’s music focuses more on color and texture, rather than form and harmony. In his orchestral works, Debussy centered on the employment of different instrumental timbres. Oftentimes one instrument will be associated with a particular motive. In this way, the shape and structure of Debussy’s works are defined more by contrasts of timbre and texture rather than tonal function or other traditional formal devices. 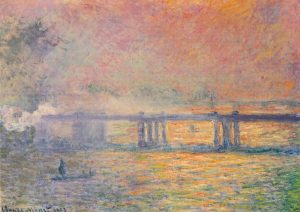 A term that is often heard in conjunction with Debussy’s name is “Impressionism,” a style of painting centered in Paris that concentrated on depicting the effects of light and color of a scene rather than clear and exact detail. (Artists from the original Impressionist circle of the 1860s and 70s included Pissarro, Monet, Degas, Renoir, and Sisley, but Debussy was actually a contemporary of later painters such as Paul Gauguin and Vincent Van Gogh, known now as the Post-Impressionists). Similar to Impressionism, Debussy’s works typically suggest a mood or atmosphere, rather than expressing a strong emotion or depicting a narrative or story.

Debussy’s Nocturnes for orchestra, a suite of symphonic poems, is an apt example of the influence of Impressionist paintings on Debussy’s work. Composed during 1897-99, Debussy borrowed the title not from the music genre of the same name, but of a series of Impressionist paintings by the American artist James McNeill Whistler. The three movements of Debussy’s Nocturnes are shrouded in shadow, like the way Whistler’s paintings evoke hazy scenes in the absence of direct light. 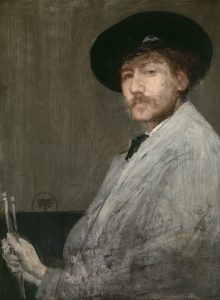 Arrangement in Grey: Portrait of the Painter, 1872 by James McNeill Whistler.

For the first movement Nuages (Clouds), Debussy wrote that he sought to capture “the unchanging appearance of the sky with the slow and melancholy progress of the clouds, ending in a gray dissolution gently tinged with white,” and he commented to a friend that he was thinking of the play of clouds over the Seine in Paris. In Nuages, we hear Debussy’s use of “images” come to the fore. These images – characterized by factors like motive, rhythm, and pitch collection, are repeated, altered, and layered throughout the piece, creating an almost visual kaleidoscopic experience that moves beyond the typical method of presenting, developing, and recapitulating themes.

The first image of Nuages emerges in the opening theme, a pattern of alternating fifths and thirds. These alternating intervals suggest movement without a clear sense of direction, akin to drifting clouds. Throughout the movement, this image repeats itself, but is slightly shifted each time, with winds replacing the strings, new intervals such as full triads and seventh chords replacing the original thirds and fifths.

Superimposed upon this first image is a second idea, a motive in the English horn that rises and descends in a different time meter than the other instruments (4/4 time against 6/4 time). Unlike the first oscillating idea, this second image remains relatively intact each time it appears, and is always played by the English horn.

Interspersed between the two images are several contrasting episodes, including a chordal idea in the strings and a unison melody that gradually intensifies. Later, a calmer-sounding section recalls Asian influences, with sustained strings underpinning a pentatonic melody in the flute and harp, possibly in reference to a Japanese flute melody or Javanese gamelan music. Debussy likely encountered pentatonic scales during at the Paris Exposition, ancient five-note scales that can be heard in folk traditions from around the world. 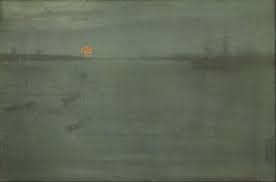 The interplay between the two “images” and the contrasting episodes in Nuages are set apart by contrasting keys. The oscillating cloud image encompasses a B-minor scale, contrasting with an octatonic scale outlining a tritone in the second English horn image. The episodes take on other tonal worlds, such as the pentatonic melody centered on a D# Dorian scale. These key areas, however, don’t necessarily lead from one to another in a pattern of tension and release. Rather, Debussy uses different pitch collections to distinguish different blocks of sound that aimlessly merge from one to another, like drifting clouds on a gray day.

Debussy and Symbolist Poetry: Prélude à “L’apres-midi d’un faune” (Prelude to “The Afternoon of a Faun”)

Debussy was also significantly influenced by the writers of the French Symbolist poetry movement. Symbolism sprang from literary roots, gaining inspiration from writers including Charles Baudelaire and Edgar Allan Poe. Symbolist poets rejected previous artistic leanings towards naturalism and realism, instead favoring dreams, visions, and the power of the imagination.

Symbolists were interested not in representing or describing reality, but in exploring the intangible and inexpressible truths hiding behind external appearances. Symbolist poetry is typically introspective and suggestive, leaving meanings open-ended – much like the tonal and structural ambiguity of Debussy’s music. In fact, for the Symbolist movement, music represented the ideal medium for expressing realm of the intangible, capable of suggesting multiple possible meanings and psychological states rather than spelling out specific concepts or narratives.

Debussy himself was closely tied with the Symbolist circle in Paris. In the early 1890s, Debussy regularly attended the influential mardis (Tuesday) gatherings of the poet Stéphane Mallarmé, along with poets Paul Verlaine, Arthur Rimbaud, and other painters and intellectuals. Just as music was a source of inspiration for Symbolist poetry, Symbolist poetry was an exxential source of inspiration for Debussy’s music. One of Debussy’s most celebrated orchestral works, Prélude à “L’apres-midi d’un faune”  (Prelude to “The Afternoon of a Faun”) is based on Mallarmé’s prose poem “L’après-midi d’un faune.” (Mallarmé was reluctant to have anyone else set his poetry to music, but was ultimately impressed with the Prelude when Debussy invited him to the premiere in 1894).

In Mallarmé’s poem, a faun (a man with the legs of a goat) contemplates a memory, or possibly a dream, he has of two nymphs he encountered in the forest on a warm, lazy afternoon. The faun plays his pan-pipes, but, upon realizing that his music fails to capture the viscerality of his experience with the nymphs, he abandons his pursuits to a sleep filled with dreams and visions.

The Prelude to “The Afternoon of a Faun” is considered by many as the beginning of modern music. The piece requires a different way of listening – as you follow where the sounds take you, and enter a dream-like state much like the faun himself. Like Mallarmé’s poem, Debussy’s Prelude is fluid and mysterious. A defining feature of both the poem and the musical piece is a lack of discrete sections, seamlessly flowing the listener through one idea into the next.

The piece begins with the music the faun plays in the poem, a lugubrious melody on the flute that descends a tritone (an interval equivalent of a diminished fifth or augmented fourth) before rising back up. This tritone becomes a sort of unifying element of the piece, and it is also notable in that it outlines a whole-tone scale. A whole tone scale is a six-note scale made up entirely of whole-step intervals (i.e., starting from C on a piano, three white keys followed by three black keys). The whole-tone scale contributes to the hazy, mysterious quality of the piece because it doesn’t belong to any particular key and thus lifts the urgency for the harmony to resolve anywhere. This opening theme in the flute reappears throughout the piece in many forms, re-harmonized, re-orchestrated, and sometimes even incorporated into other melodies. In a way, the variations of the melody could be said to represent the faun, cycling through different conjectures about the nymphs: Were they real? Were they a dream? Were they but a creation of his own desire? 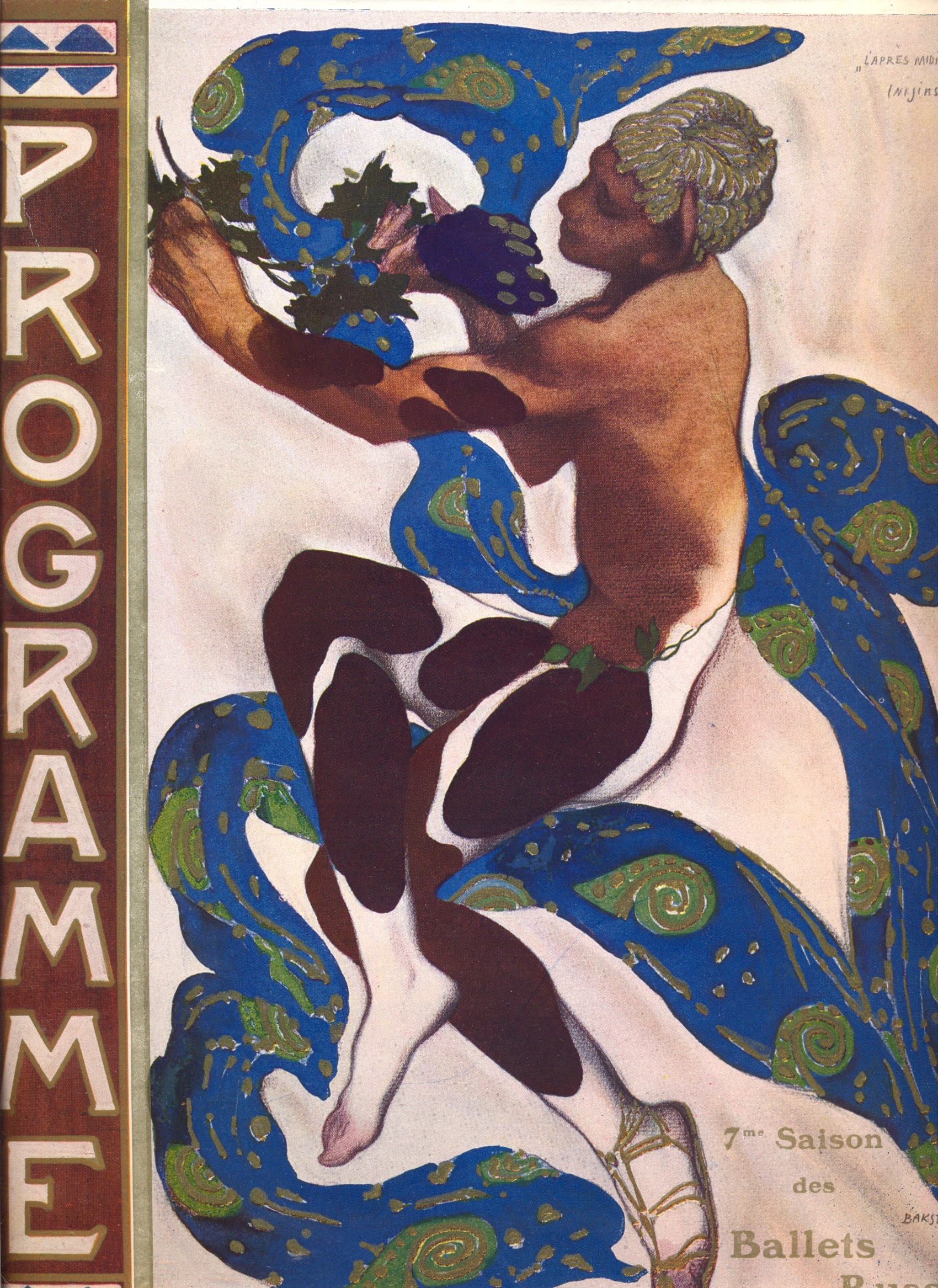 Near the middle of the Prelude, Debussy slides the listener into a B section that introduces a lyrical tune in D-flat major, reminiscent of a more traditional French operatic interlude. Throughout the piece and especially at the end when the opening flute melody returns again, there are hints of E major being the tonic or home key. However, an intentional ambiguity remains through Debussy’s insistent use of the tritone interval, unresolved seventh chords, and obscured boundaries between different tonal areas. Just like Mallarmé’s poem, where the normal meanings of words are clouded which vague metaphors and simultaneous references, Debussy’s Prelude is like an ambiguous dream barely out of reach.

Debussy’s legacy on classical composers still looms large to this day. His focus on the potential of sound itself encouraged further explorations in experimental music by Varèse, Cage, Crumb, Penderecki, and others. Debussy broke the rules, and he was very aware of it. In a conversation from around 1890 with his former teacher at the Paris Conservatoire, Ernest Guiraud, Debussy was said to have remarked “There is no theory. You merely have to listen. Pleasure is the law.” For Debussy, music was, above all, an art of sound.