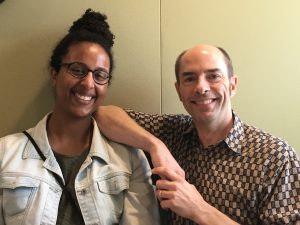 It is common knowledge that a good performer makes their work appear seamless. There are no cracks through which information about their influences, skills, and technique pours out. Although some audiences consider it a privilege to crack open a performer and examine the rivers which course through their art, it is usually the case that performers contain these sources within their work, rendering them invisible to the audience’s eye. It is also the case that performers are uninterested in their artistic sources. This perspective is at play when JK Rowling wonders why adults always ask where her ideas come from, effectively criticizing their inability to fathom the imaginative leaps she makes to create the HP world. Basquiat shares this sentiment in Schnabel’s film Basquiat when he frames a question about his artistic choices as dubious: “Was Miles asked where he got his notes from?” I believe that these questions should continue to be posed despite its censure. This is even possible without seeming inane or intrusive. At All Classical Portland, it is necessary to expose the backstage for audiences and involve them in the space and its processes because All Classical Portland aims to create music which its listeners believe in and love.

Opening Conversations at the Booth
with Robert McBride

Z.A: Are there any conceptualizations you have made in your time as an on-air host which underlies your job and the way you work?

R.M: I think of presenting classical music on the radio more as the means than the end. What we’re really doing is trying to enhance the lives of those who listen to us, with music, information, and companionship. The shared, real-time listening experience, by thousands of people around the world, is particularly intriguing to me: most of those people will never have any kind of contact with each other, by they are, nevertheless, a community created by shared interests. The hosts are members of that community and facilitators of that experience.

Z.A: Do listeners know they’re experiencing music in a community and should they? Do you envision a listener on their own or in community, and which do you work for?

RM: It would vary. Extroverts might be more likely to think of themselves as sharing the listening experience with others, but introverts might prefer to feel like they’re having a more intimate, or even private, experience. I/we need to serve both kinds of listeners and be aware of their needs, preferences, and experiences. There are different kinds of listening experiences every day: someone alone in their car, someone else with a group at a dinner party, etc. Certainly the more we refer to different situations or different time zones, the more the listeners will be aware of them and perhaps feel some kind of connection or virtual community.

Z.A: What do you prioritize in your presentation of music? Is companionship more important than historically contextualizing music?

R.M: I think companionship is more important, though I didn’t use to see it that way, when I started way back in the previous century.

Z.A: As the voice which introduces music and the first voice to be heard at the close of music, you may be embedded in listeners’ impressions of music. Do you feel that your position as a facilitator of musical experiences changes? If so, what do you do to offset your omnipresence?

RM: I don’t want to be thought of as omnipresent! I try to avoid that by not talking too much and by varying that constantly: some of my voice breaks will be longer than others, and the occasional really short one helps to keep things moving and keep the emphasis on the music.

This desire he expresses above, to open Western classical music to listeners in different geographical, social, and psychological situations, is evident in his weekly, live broadcast. It has been my pleasure to help set up Thursdays @ Three as I could see his beliefs in action. He made sure all parties were informed about how the broadcast would proceed–performers were given a chance to OK interviews before the broadcast and audience members learned what his gestures for applause and holding for applause looked like–thereby putting everyone at ease and creating an environment where joy and spontaneity were possible.

The Playlist
with John Pitman

Z.A: How do you understand your work as a music programmer at All Classical Portland?

JP:  I’m part of what we call our Programming Team.  It comprises myself, as music director, as well as John Burk, VP of Programming, and Suzanne Nance, Program Director.  Each has different roles and tasks to perform, but we all have the same objective:  to create fresh, vibrant, compelling and relevant programming with classical music.  The latest CDs are sent to me to audition, and either add directly to the playlist, or share with John and Suzanne to give me their perspectives before adding to our mix.  My main work, though, is crafting each day’s music log for the hosts to share with listeners.  This occupies a large portion of my week:  carefully listening to, and crafting, the sequence of music that is heard from 12am to 11:59pm each day of the year.

Z.A: Are there any conceptualizations you have made in your time as a programmer which underlie your job and the way you work?

JP:  Mr. Burk and I, primarily, laid the foundation of the music programming some time ago, which comprises all of the standard repertoire, along with neglected gems, and pieces written by today’s composers which enhance our “sound”.  I start each day’s programming with the music that is currently available to use:  there is library software that helps me – and all of the hosts when they search for pieces – that prevents us from duplicating our own, previous days’ programs.  This ensures the freshest selection of pieces, and avoids overplaying of any piece in our playlist.  We also program music according to its energy level (think Barber’s Adagio versus a Sousa march), and keep certain pieces from appearing at select times of day or night.  This helps to create the appropriate sound to accompany listeners’ activities.  There’s more, of course, but we don’t want to give away too many of our secrets!  It might spoil the magic.

Z.A: Do you have to establish the station’s sound every day?

JP:  I don’t have to establish the station’s sound, so much as sustain it.  A longstanding familiarity with the program department’s vision and mission ensures consistent quality.  The software I mentioned helps me make sure that our overall vision for how the station should sound, remains consistent from day to day.

Z.A: Is there a hierarchy among the music that comprises the station’s sound? For example, do you prioritize standard rep over new music and play it more?

JP:  We make sure that we meet our listeners’ expectations, by maintaining a good balance between the standard repertoire, and newer works or less-familiar pieces from past eras.  Some pieces that we’ve incorporated into our programming have turned up on orchestral concerts over the years, so we seem to be making a good impression!  If either type of music (favorites/unfamiliar) are played too often, listeners notice.  They might say that we’re not digging too deeply, while other listeners might perceive that we’re neglecting the masters.  It takes great care and attention to what’s being played to make sure it all stays fresh.

Z.A: In order to program relevant content, do you solicit listener’s feedback and program in light of it? Is listener satisfaction and enjoyment, which you call your end goal, possible without addressing listeners’ requests?

JP:  We find that we don’t need to solicit listener feedback, as the passionate classical music fans discover pieces on their own, and then simply get in touch with us.  They might do that via our Saturday request program, our annual Classical Countdown (in December), or simply sending us an e-mail.  I’ve been introduced to some wonderful pieces that we’ve subsequently added to our playlist.

Z.A: What skills/traits/processes are necessary for music programming?

J.P: First of all, a deep knowledge of, and appreciation for, the art form (classical music).  Knowing the music (pieces, or compositions) well, and on an intimate level, ensures the highest level of quality for the listening experience.  It takes a long time, of course, and objectivity can be a challenge.  We strive to present the music according to long-agreed decisions about what constitutes great music; along with that, our subjective sides inform us how to make critical decisions of what pieces should be added to the standard repertoire.  Another trait is identifying when is the right time to play a piece.  Not just time of day, but time of week, or year.  Finally, I would say, passion for this music determines the end result that we’re working toward.  Consistent listener satisfaction and enjoyment.

Negotiating Conversations at the Mixing Board
with Andrea Murray

Z.A: How do you understand your work as a producer?

A.M: My work involves weaving sound and text and music to say something that, ideally, is worth hearing – whether it’s an artist interview, a reported feature or even a promotional message. I try to set a high technical and aesthetic standard for everything I do here. Still, I’ll be the first to admit slick production can never compensate for poor writing or dull ideas.

Z.A: What skill or trait do you feel is necessary for production?

A.M: Anyone can learn the basics of audio software in a couple of hours. But it takes years of being attentive to sound, of really listening, to know what to do with it. Having a background in music really helps.

Z.A: Are there any conceptualizations you have made in your time as a producer which underlies your job and the way you work?

A.M: Here are some ideas that have been passed on to me over the years: Pay attention; Give people space to tell their own stories; Show up with your record running; It’s not about you, but you have to be fully present; Having a microphone grants you a kind of access not everyone has, so use it for the benefit of others whenever possible; There’s nothing wrong with a little ear candy once in a while. You’re an invited guest in people’s homes/headphones – try to be good company.

Off-script: I have learned from Andrea Murray that production is also like stage management.  As such, duties include controlling the spotlights on speakers (“actors) and segments (“scenes”) so that (1) the conversation between the speakers is clear without their tendencies as a pairing (to be amicable, adversarial) or as individuals (to respond loudly, to trail off) to get in the way, (2) the progression between segments is smooth and seems to constitute a natural progression in the show, and (3) a back, mid, and fore-ground is established without the listener having to prioritize what to listen to.

Another way I have envisioned the role of a producer is that it is like emceeing. Just as an MC understands that there is a lot of activity during the event they guide and therefore speaks efficiently and interestingly, a producer also realizes that listeners tune in during other activities. Therefore, producers unearth from audio a script which has a through line. That way, every listener, from the attentive to the distracted, can follow along at every point in the show. Andrea did suggest stick shift driving as a comparison, but I don’t know how to drive. Perhaps there are learned and skilled readers out there who can benefit from this comparison.

Although the interviewees may not agree with me that they are performers, I believe that their commitment to their work, demonstrated in their answers and on a daily basis, should prove them wrong. I have thoroughly enjoyed watching them in action and wish the station continue success. Break a leg!