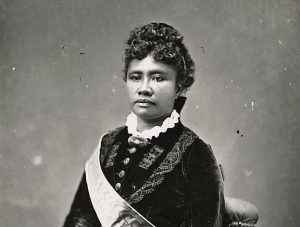 Lili‘uokalani (1838-1917) was the Queen Regnant of Hawai‘i from 1891-1893, and was the nation’s last monarch. During her reign, she resisted the annexation of Hawai‘i by the United States, and after the coup that deposed her, she remained dedicated to the interests of the Hawaiian people.

A trained singer, choir director and organist, Lili‘uokalani composed more than 150 mele, Hawaiian songs and chants. Her legacy of music remains greatly loved: she is one of the most-performed composers among Hawaiian musicians. The Queen’s songs transcend genre and are constantly reinterpreted, whether it be in popular or folk styles, as accompaniment to Hawaiian dance, in hymnlike choral arrangements, or as songs with piano.

"To compose was as natural as to breathe...” 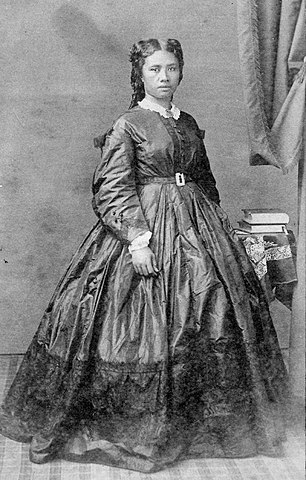 The Queen was born Lydia Kamaka‘eha on September 2, 1838. She would assume the name Lili‘uokalani when she was named heir-apparent to the Hawaiian throne. When she was a schoolgirl, her instructors discovered her remarkable talent for sight-singing. This skill, which depends on the ability to read and hear music accurately in one’s mind, served her well throughout her life: when she became a political prisoner with no access to a piano, the Queen was still able to compose.

In her autobiographical and political book, Hawaii’s Story, Lili‘uokalani reflected, “To compose was as natural to me as to breathe; and this gift of nature, never having been suffered to fall into disuse, remains a source of the greatest consolation to this day….Hours of which it is not yet in place to speak, which I might have found long and lonely, passed quickly and cheerfully by, occupied and soothed by the expression of my thoughts in music; and even when I was denied the aid of an instrument I could transcribe to paper the tones of my voice.” (Hawaii’s Story, 31).

Lili‘uokalani composed one of her first important early works in 1866. She tells the story herself in Hawaii’s Story: “In the early years of the reign of Kamehameha V. he brought to my notice the fact that the Hawaiian people had no national air. Each nation, he said, but ours had its expression of patriotism and love of country in its own music; but we were using for that purpose on state occasions the time-honored British anthem, ‘God save the Queen.’ This he desired me to supplant by one of my own composition. In one week’s time I notified the king that I had completed my task.” (Hawaii’s Story, 31)

Lili‘uokalani, who was then serving as choir director at Kawaiahao Church in Honolulu, conducted her choir in the premiere of the new anthem, He Mele Lāhui Hawai`i (Song of the Hawaiian Nation). As is the case with most of her compositions, Lili‘uokalani  wrote both the lyrics and the musical setting. The King “admired not only the beauty of the music, but spoke enthusiastically of the appropriate words, so well adapted to the air and to the purpose for which they were written.” (Hawaii’s Story, 31-32) 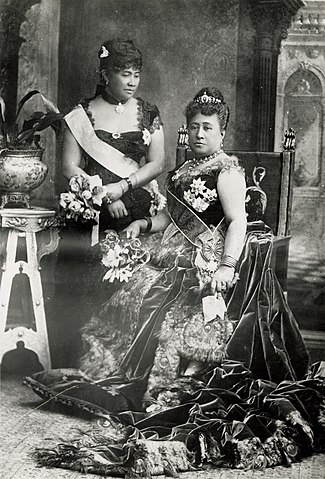 In 1887, Princess Lili‘uokalani attended the celebration of Queen Victoria’s Golden Jubilee as a part of a royal delegation that included the Queen Consort Kapiʻolani. Upon their arrival in England, the royal Hawaiian party were given an audience with Queen Victoria and were seated with international royalty at the Queen’s Jubilee service at Westminster Abbey.

In only a few years, Lili‘uokalani would be fighting for the acknowledgement of her position: in fact, before the delegation returned from the Queen’s Jubilee, King David Kalākaua was forced to sign away most of his power at pressure from American plantation owners and annexation supporters, in what was called the Bayonet Constitution.

Lili‘uokalani composed a song in honor of Queen Victoria’s royal anniversary, known as “The Queen’s Jubilee.” Its lyrics, saluting Victoria as a fellow monarch, ring poignantly in hindsight.

In 1891, Lili‘uokalani ascended the throne after the death of her brother, King Kalākaua. When she proposed to reverse the Bayonet Constitution, restoring power to the monarchy, a group of American businessmen who owned lucrative plantations on Hawaii conspired to stage a coup.  Calling themselves the “Committee of Safety,” the group created a militia which gathered outside the royal residence of Iolani Palace on January 17, 1893. They were supported by a contingent of United States marines sent by John L. Stevens, the United States’ minister to Hawai’i.

To avoid an outbreak of violence, Lili‘uokalani abdicated the throne. She explained her decision in a statement to President Benjamin Harrison: “This action on my part was prompted by three reasons: The futility of a conflict with the United States; the desire to avoid violence, bloodshed, and the destruction of life and property; and the certainty which I feel that you and your government will right whatever wrongs may have been inflicted on us in the premises.” (Hawaii’s Story, 395)

Sanford Dole, an American lawyer who had served the Hawaiian kingdom as a Supreme Court justice, became leader of a “Provisional Government,” with the goal of convincing the United States to annex Hawaii and consolidating control of the islands in the hands of the island’s American plantation owners.

In 1895, an uprising took place to regain Hawaiian independence and reinstate the Queen. As a result, Lili‘uokalani was tried for treason and imprisoned in the former royal residence, Iolani Palace. During the Queen’s imprisonment, she was cut off from the outside world, and forbidden access to any political news. Kuʻu Pua I Paoakalani, one of the songs she composed during this time, offers a coded reference to her efforts to stay informed. The song is dedicated to John Wilson, the son of her companion Evelyn Townsend Wilson, who regularly sent the Queen flowers from her royal garden, Uluhaimalama. The flowers arrived wrapped in newspaper – pages which the Queen was able to read, and keep abreast of political developments.

Ke Aloha o ka Haku, or The Queen’s Prayer, is another composition from the Queen’s imprisonment at Iolani. Like many of her works, this song is in a style known as hīmeni, a genre that combines Protestant hymnody structure with the melodic contours of Hawaiian mele. The Queen’s Prayer is a direct response to her experience as a political prisoner, but its poetic text is broad enough to offer timeless spiritual resonance. The Queen dedicated this song to her royal heir apparent, Victoria Kaiulani.

To display the versatility of Lili’uokalani’s music, here are three interpretations of The Queen’s Prayer. This unaccompanied performance is sung by Hawaiian soloist Nalani Olds.

In this recording, the Kamehameha Schools Children’s Chorus sings The Queen’s Prayer.

This third interpretation is sung by The Rose Ensemble. 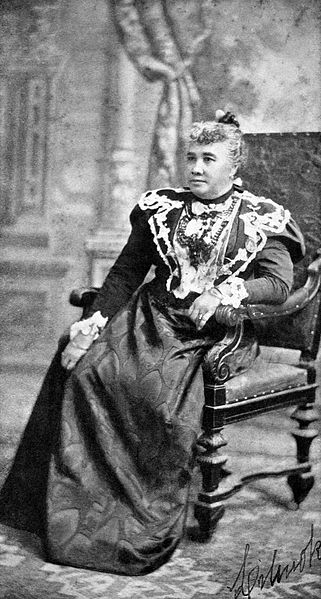 When Liliʻuokalani was released from house arrest, she dedicated herself to advocating for Hawaiian independence. In early 1897, the Queen and her adopted daughter traveled to Washington, D.C. to meet with President Grover Cleveland and ask for his aid in reinstating the Hawaiian monarchy. Cleveland, an anti-imperialist, was an ally of the Queen, and had opposed the overthrow of the Hawaiian monarchy. However, his administration ended that same year, and the new President, William McKinley, favored the annexation of Hawaii.

In the fall of 1897, the Queen was joined in Washington by delegates from Hawaii carrying a Petition Against Annexation, signed by 21,269 Hawaiians. They continued to lobby against the annexation of Hawaii, finally losing the in 1898, when the outbreak of the Spanish-American War convinced members of Congress that Hawaii was a valuable strategic location. McKinley signed the annexation into law on July 7, 1898.

Liliʻuokalani lived the rest of her life as a private citizen in Hawaii, but remained a strong symbol of leadership and Hawaiian identity. Her continued resistance to the American annexation included years of tireless, but ultimately unsuccessful, efforts to regain royal land holdings that had been seized by the United States. 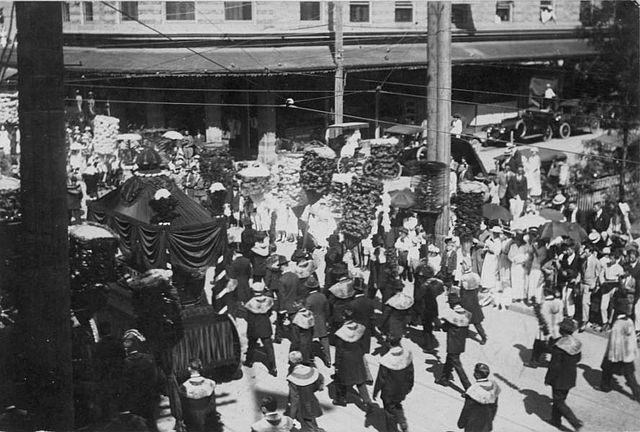 The funeral of Queen Lili'uokalani

Queen Liliʻuokalani’s most famous composition remains Aloha ‘Oe, a tender song of two lovers parting. According to legend, the Queen was inspired to write this song when she saw a Hawaiian royal officer receiving a lei as a parting gift from a Hawaiian girl. This lovely mele eventually gained another layer of significance, as a song of mourning for the loss of Hawaiian independence. When the Queen died in 1917, a children’s choir sang Aloha ‘Oe at her entombment, at the close of a funeral procession that was attended by around 1500 people.

According to a contemporary report, elderly Hawaiians present at the funeral – those who remembered Hawaiian independence – were particularly sorrowful. “Tears flowed fast down their cheeks as they sensed the actuality of the departure of every vestige of former royalty and the existence of the monarchy from Iolani Palace. The spirit of Liliuokalani had winged its way to eternity.” (The Christian Advocate, December 27, 1917)

At her death, Queen Liliʻuokalani  bequeathed what land holdings she still had in a trust to benefit the orphaned and destitute children of Hawaii. The Lili‘uokalani Trust endowed the Queen Liliʻuokalani Children’s Center, which continues to provide care for Hawaiian families to the present day. 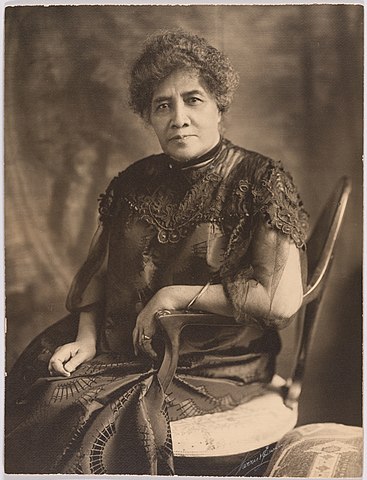 The following sources were invaluable in writing this article. Check them out to learn more about Liliʻuokalani, Queen of Hawai‘i.

“The Annexation of Hawaii: A Collection of Documents.” Univeristy of Hawai‘i at Manoa Library.

All images courtesy of Wikimedia Commons.