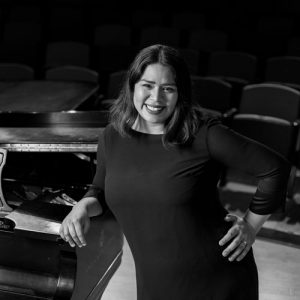 Classical music has been the focus of my work and passion since I was given the opportunity to study cello at a young age through a free arts education program in northern California. Having experienced the transformational power of the arts in my own life, I’ve dedicated my career to providing the same for others.

When not working, I’m wandering through thrift stores, listening to classic hip hop, grabbing a bite at the food carts and spending time with my family.

String Trio debuts with “Silenced Voices” (Black Oak Ensemble) 2020 (specifically, January 27) marks the 75th anniversary of the liberation of Auschwitz, the WWII concentration camp that is symbolic of the persecution and murder of millions of Jews and other groups by the Nazi regime.  In addition to the handful of people who survived the… More

All Classical Portland is thrilled to announce the station’s 2020 Artists in Residence: flutist Adam Eccleston and pianist Natalie Tan! The Artists in Residence program, launched in 2019, provides young and professional musicians with opportunities for career advancement, creative development, and audience exposure. The program is a part of JOY (Joyous Outreach to You/th), All Classical… More

The Montenegro-born guitarist Miloš has just released his fifth album, and the first in about 3 years. Sound of Silence (Decca) is, in a way, autobiographical: in 2016, just after the release of his Beatles-inspired disc, Blackbird, Miloš began experiencing a tightness in his hand that affected his ability to play. He eventually stepped away… More

Violinist Margaret Batjer has been associated with the Los Angeles Chamber Orchestra for a number of years. In their first CD for the Swedish BIS label, Batjer and the LACO begin with a new violin concerto by Quebec-born composer, Pierre Jalbert. With movements titled “Soulful, mysterious”, and “With great energy”, Jalbert’s concerto is in good… More

Guitarist Sharon Isbin has recorded nearly everything in her instrument’s repertoire. Still, it’s refreshing to hear that, when an artist such as Ms. Isbin revisits a work (such as the Vivaldi D Major concerto), she gives us an interpretation with subtle differences from what came before. On “Souvenirs of Spain and Italy”, Isbin partners with… More

Over the centuries, composers have attempted to capture their natural surroundings in music, from the bucolic imagery of Beethoven’s Pastoral Symphony to the vast prairies evoked by Aaron Copland’s The Tender Land. Oregon is lucky to boast a fortune of natural grandeur as rich and wide-ranging as this tradition, with splendors from the temperate rainforests… More

Matthew Lipman is a 2015 Avery Fisher Grant winner, has recorded with Rachel Barton Pine and Sir Neville Marriner. Since graduating from Juilliard Lipman is now on the viola faculty at Sony Brook University and concertizes around the world. His debut CD, Ascent, is in tribute in part to his mother (d. 2014), and commissioned… More

Soprano Joyce DiDonato’s recording projects are seldom conventional. Her last, “Hopes and Dreams: The Lullaby Project” featured original songs to texts by new mothers, some of whom were experiencing financial insecurity. Her newest, Songplay, goes back to her roots as a budding singer.  She rediscovered the arias that all young singers are taught, and then… More

Donate your car to All Classical Portland!

Finish up your spring cleaning with a car donation! Now, you can turn that old Volvo into Vivaldi! All Classical Portland partners with CARS to accept donations of cars, boats, RVs, and more as part of its vehicle donation program! Turn worries of costly repairs or hours selling your vehicle into a tax deduction that… More

Where We Live: Bridging Voices

Tune in this Saturday at 5:15pm as we explore the local youth chorus, Bridging Voices, through the Where We Live series. Bridging Voices is Portland’s first Queer/Straight Alliance Youth Chorus, now in its sixth season. Through singing with others, youth are able to build strong connections with each other, and with the community. Artistic director Erick… More